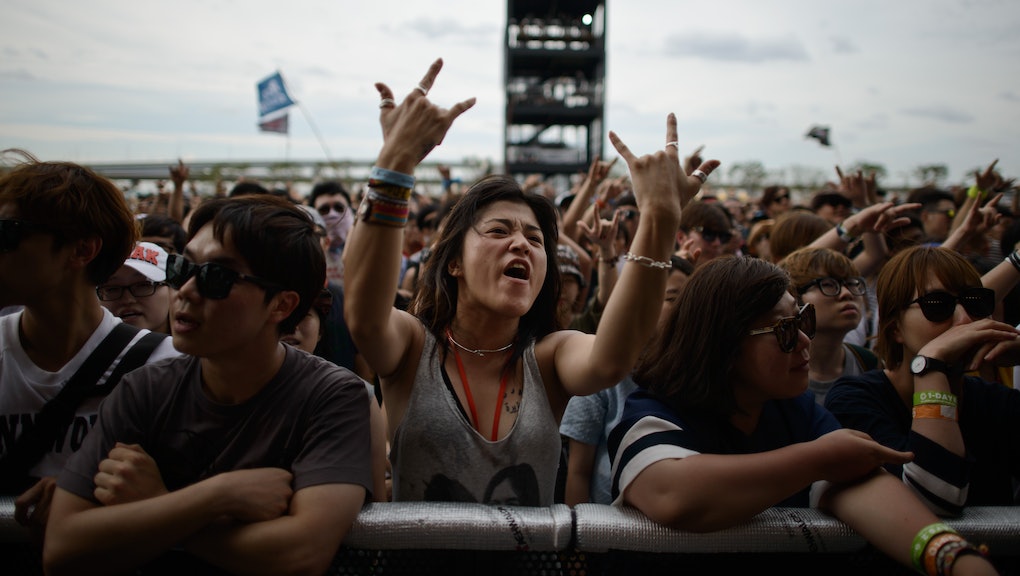 Metalheads are music's most misunderstood fans.

The uninitiated may be repelled by the punishing tempos and intense riffage, but they don't see what the music really has to offer. Peel back a layer of doom, and metal has a lot to celebrate: complex musicianship, lyrical complexities and compelling personalities unconcerned with participating in music's popularity contest.

Science has been especially interested in fans of metal music and what makes them tick, and researchers have found that metalheads do not fit the genre's stereotypes. They're not all brooding malcontents or depressive assholes. They're simply people who find catharsis in uncompromising, aggressive music. In fact, numerous surveys and studies argue that metalheads might be some of the most passionate, grounded music fans out there.

Here are five reasons metal fans are worth celebrating.

Metalheads are more loyal than other fans.

According to recent Spotify research, metal fans are more loyal to their favorite musicians than any other fanbase. Using data taken from Echo Nest, Spotify tallied the stream counts of the biggest artists from every genre. For metal, these were Metallica, Slayer, Judas Priest, Iron Maiden, Sepultura, Pantera, Cradle of Filth and Anthrax — all the foundational '80s and '90s acts, representing a variety of subgenres. Researchers then divided those play counts by the number of fans those streams came from to confirm metal fans returned to support their favorite artists more than any other genre. Pop was a distant second.

Metal likely draws more from the classical masters of old than any other modern genre. The way metal's most esteemed musicians, such as Yngwie Malmsteen, Ulrich Roth of the Scorpions and Ritchie Blackmore of Deep Purple, "[adapted] classical models sparked the development of a new kind of guitar virtuosity," writes musicologist Robert Walser. Additionally, this led to "changes in the harmonic and melodic language of heavy metal, and new modes of musical pedagogy and analysis." In other words, these artists' careful study of classical forms has helped make metal into one of the most complex forms in modern music.

But beyond the music sounding the same and sharing similar standards of excellence, metalheads and classical fans also share similar temperaments. According to studies out of Heriot-Watt University, both groups of fans tend to be creative and gentle individuals, comfortable in their own skin.

They're also committed to their loved ones.

In addition to being more loyal to their artists, metal fans are also more loyal to their significant others than are fans from any other genre. A survey from the dating site Victoria Milan, which targets people in committed relationships looking for flings, found that metal fans are the least likely to cheat. It's definitely the least scientific of any of these studies, but it does offer some insight into the metal mind.

The survey asked participants the type of music they listen when thinking of their illicit lovers. The study showed that 75% of participants think of their lover when listening to their favorite songs. Fans of metal made up the smallest percentage of these errant thinkers.

In an extraordinarily elegant passage, Metal Sucks' Emperor Rhombus explains the finds as evidence that "metalheads are grateful."

"They've spent a lot of their lives being told they're stupid, evil, irrelevant or lame," Rhombus writes. "When they find someone or something that sees the good in them, they hold onto it."

Metal fans are peaceful, on the inside and out.

From the outside, it may seem metal's ferocious barrage of screams could be a perfect recipe for inciting anger and violence. "The general public has held a stereotype of heavy metal fans being suicidally depressed and a danger to themselves and society in general," Adrian North, leader of a study out of Heriot-Watt University, told the Guardian. "But they are quite delicate things." According to subsequent research out of the University of Queensland, metal fans actually derive a much wider spectrum of emotions out of their music than stereotypes would have one believe.

After deliberately provoking their participants by having them describe angry memories from their life, researchers had participants cool off by either listening to their favorite metal or silence. The metal listeners became as tranquil as tattooed Buddhas. "We found the music regulated sadness and enhanced positive emotions," said Leah Sharman, co-author of the Queensland study, according to Unilad. "The music helped them explore the full gamut of emotion they felt, but also left them feeling more active and inspired."

Silence did calm participants, but it could not reinvigorate to the same degree metal could. In other words: Fuck silence.

Metal fans are stable and confident, which is sexy.

Several personality studies of musical taste groups show that metalheads have far greater emotional stability than pop music fans. Researchers at the University of Texas at Austin stated the following about about listeners of "intense and rebellious" music: "Interestingly, despite previous findings that this dimension contains music that emphasizes negative emotions, individuals who prefer music in this dimension do not appear to display signs of neuroticism or disagreeableness. Overall, individuals who prefer intense and rebellious music tend to be curious about different things, enjoy taking risks, are physically active and consider themselves intelligent."

A 2013 study from the University of Westminster found similarly that metalheads tend to be open-minded and have a high need for uniqueness. They tend to have lower self-esteem than other genres; however, the study's authors write, the "catharsis afforded by heavy metal may, in turn, help boost self-worth and promote positive self-evaluations among those with otherwise low self-esteem."

Metal fans also may be more skeptical of institutional authority and have higher standards for their music than other fans. Metal fans are on point in so many ways, and cannot be pinned down by any simple stereotype.