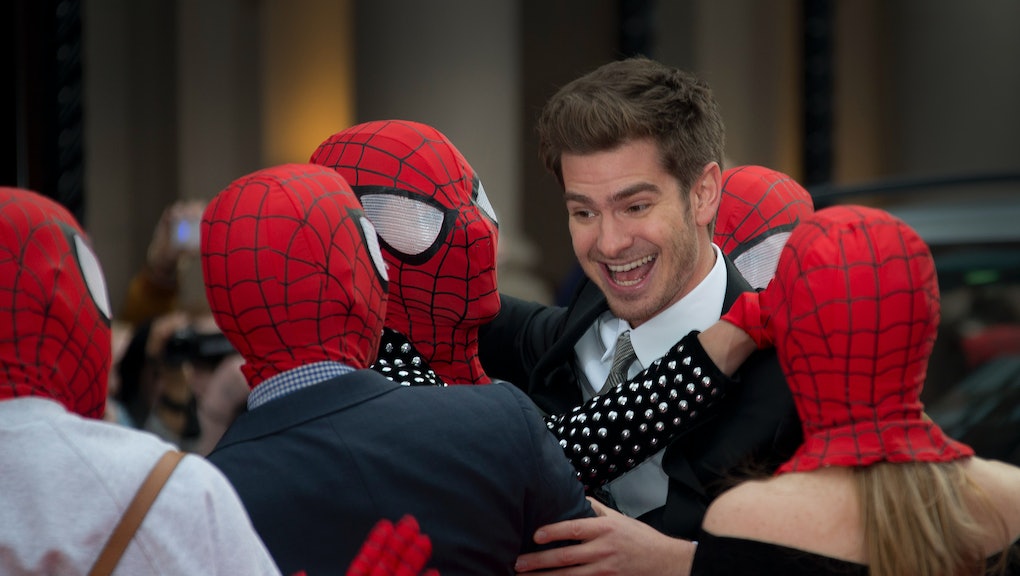 Spider-Man is fake. His adventures are fiction. His powers are scientifically impossible. He's been played by two different actors on film and has appeared in comic books rendered by scores of different artists.

So the idea that there's anything fixed about his appearance — that he has to look a certain way, or be a certain color — is not only logistically absurd, it ignores the many diverse perspectives his creators have brought to his story.

Why, then, is he always portrayed as white on the big screen? Because his contract says he has to be, according to Gawker's analysis of leaked Sony Pictures documents.

A 2011 licensing agreement between Sony and Marvel, which share the rights to the Spider-Man character, lists a series of "Mandatory Character Traits" to which Peter Parker, Spider-Man's alter ego, must legally conform.

This contract goes a long way toward clarifying some of the recent debate around diversity in comics and their adaptations. After Andrew Garfield was tapped to play the character in 2010, a spirited conversation on Twitter and other social media suggested a number of non-white options moving forward, including, perhaps most famously, Donald Glover, who expressed his enthusiasm for the idea and prompted the trending hashtag #donald4spiderman.

In 2013, Garfield himself even questioned why Spidey's ever-present love interest Mary Jane couldn't be played by a guy and even suggested Michael B. Jordan for the role. "I was like, 'What if MJ is a dude?' Why can't we discover that Peter is exploring his sexuality? It's hardly even groundbreaking!" he said to Entertainment Weekly. Incidentally, Jordan, who is black, will play the traditionally blond-haired, blue-eyed Johnny Storm, aka the Human Torch, in the Fantastic Four. It's almost certain neither the film industry nor the movie-seeking public will implode on itself because of it.

Spider-Man has also been incarnated as a Latino teenager named Miles Morales in the comic books, who is, in fact, distinct from the Peter Parker character. Overall, fans seem pretty open to the idea of a non-white iteration. And since Peter Parker is, again, a fictional character, it would not be a logistical stretch to make that happen.

So what are Sony and Marvel doing here? What are they trying to preserve? What function does Spider-Man's whiteness serve for them? And why — in an era when racial diversity in casting yields an apparent increase in box office profits — is this opportunity not just being ignored, but legally prohibited?

The persistent whiteness of Hollywood has often defied logic. But this Sony-Marvel compact also insults the capacities of the human imagination. Spider-Man could be literally anyone — black, red, gender-variant, deaf, overweight, Californian — and odds are, if they slapped some spandex on them and had them shooting webs from their wrists, the Earth would continue rotating on its axis, and everyone would be OK. We promise.