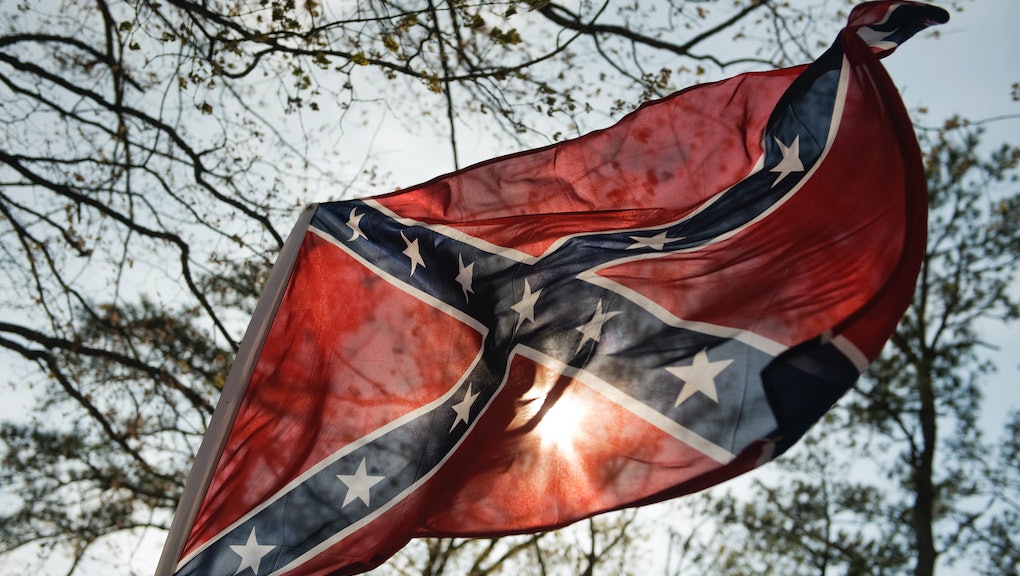 Here’s the Racist Meaning of the Confederate Flag, in the Words of the Man Who Designed It

When Dylann Storm Roof attacked Emanuel African Methodist Episcopal Church in Charleston, South Carolina, on Wednesday, he killed nine African-Americans and left behind a manifesto decrying the low IQ of "negroes," the fact that America has "no real KKK" and that claimed segregation existed to protect whites "from being brought down to [black people's] level."

He would have had much in common ideologically with William Thompson, the Savannah, Georgia, Daily Morning News editor who designed the Confederate flag that Roof took many photos with in his manifesto. Roof posed with photos of this Confederate battle flag, one of the central motifs of the second flag of the Confederate States of America. (In others, he could be seen burning the current American one.)

It's the same flag CNN reports continues to fly at the South Carolina Capitol, which even some Republicans like Mitt Romney and Jeb Bush have demanded be taken down in the wake of the massacre at Emanuel AME Church.

It's the same flag that flew on a white background and was often called "The Stainless Banner." As you can see below in this photo of an actual period flag, that label is only partially accurate.

And it's also the same flag that was explicitly designed to symbolize "heaven ordained supremacy." Syracuse University historian Jonathan Wilson, who studies antebellum American literature, tracked down the meaning of the second Confederate flag — featuring the banner at issue after the Charleston shooting, but placed on a white background — as described by its designer, Thompson.

The following is Thompson quoted in an excerpt from the book Our Flag by George Preble:

If that isn't clear enough for you, Thompson then wrote that this new flag would "be hailed by the civilized world as THE WHITE MAN'S FLAG" (sic):

"THE WHITE MAN'S FLAG," notably, was supposed to be "chaste." The Civil War-era South (and other racists that followed them) were somewhat obsessed with the rape of white women by black men.

When Roof attacked Emanuel AME Church, he reportedly accused the black parishioners of raping white women. His manifesto talked of white women in interracial marriages as "victims" who could be "saved" from their black husbands.

So why is the battle flag flag still up? As Time reports, the main reason the flag hasn't been taken down is because of its popularity with conservatives. YouGov polling has shown that "only 20% [of Republicans] say that it is either both a symbol of Southern pride and racism (16%) or just racist (4%)."

Experts in South Carolina politics told the State last year that even if state legislators rallied a credible push to remove it, it would require a two-thirds vote in both the state House and Senate as well as the approval of the governor. It just so happens that Republicans currently enjoy nearly two-thirds control of the legislature as well as the governorship.

Simply put, the Confederate flag flying at the Capitol is both a deeply held symbol of regional heritage and a protected institution.

Thompson knew what the flag meant. So did the Confederates. So did Dylann Roof. So when right-wingers defend that flag as "just heritage," it seems reasonable to surmise that they know precisely what that heritage (and that institution) means too.