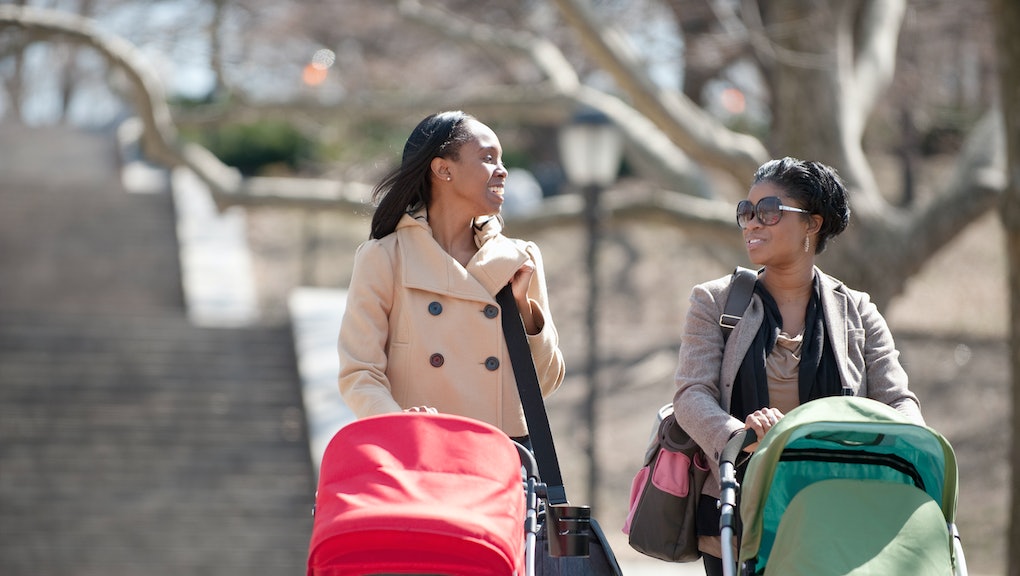 There are plenty of men and women who do in fact want kids, but want to do so within more egalitarian partnerships, with daddies on diaper duty or dish-washing shifts while moms stay late at work. There are couples who aspire to embrace ideals of equality between the sexes, blending gender roles as they do parenting roles. A 2011 study from Boston College found that 65% of fathers interviewed felt that dads and moms should split caregiving equally.

But is that egalitarian approach really possible?

Parenthood creates a gender gap: A study published in the June issue of the Journal of Marriage and Family followed a group of college-educated, white-collar heterosexual couples who reported evenly dividing household labor before having children. The men and women worked full-time and each did about 14.5 hours of housework per week.

However, nine months after childbirth, the women had increased their weekly total work (including housework, child care and paid work) by 21 hours. Men, on the other hand, only increased their work by an extra 12.5 hours per week. (Both the men and women continued to work an average of 40 hours per week outside the home.)

As the study authors put it in the abstract, "The gender gap was not present pre-birth but emerged post-birth."

An (unwanted) shift in lifestyle: There are plenty of reasons modern young women consider not having children, including financial and professional practicalities. This new study adds to women's considerations that childbirth "could shift previously attained egalitarian relationships to favor men and drastically increase women's workload such that it negatively impacts their careers," Jill Yavorksy, the study's lead author, told Mic.

The study's findings confirm prior studies that found that, although the time mothers and fathers spend doing child care and housework has converged in recent decades, women still report shouldering more childcare and housework, even though they often underestimate their contribution.

And there are women who don't want to overhaul their lifestyles and assume that traditional role.

"My vision was a nice apartment in the city and lots of time to write and see my friends," one twenty-something woman, Jessie, told Mic previously. Kristen, 27, also told Mic, "Life is about enjoying it for yourself! To some, that means sharing it by having children and a family. To others, it means different goals."

There's a bigger issue here: It's not all doom and gloom – Yavorsky told Mic that couples who take the time to really have a heart-to-heart about these issues and "continually assess the workload division post-birth" still have a shot at an equal, balanced household.

A more significant roadblock to equality is not simply a lack of conversation, but the way we assume that being a mother is the ultimate achievement for every woman.

Said Yavorsky, "We need to expand women's status — politically, economically and socially — such that motherhood is not always a primary identity marker for women." For women considering having kids, that's an important message to hear.