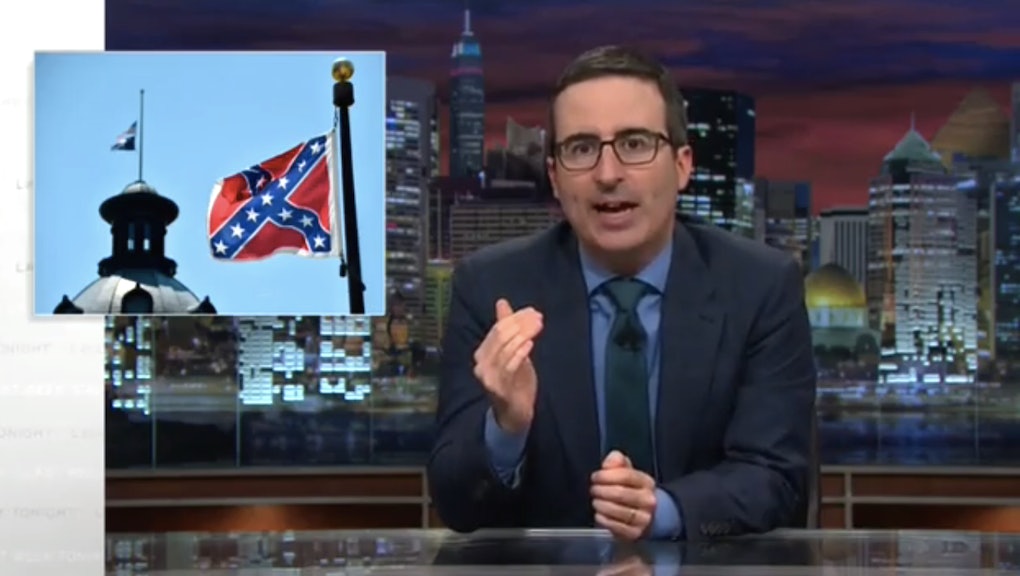 On Sunday, Last Week Tonight with John Oliver addressed the contentious issue of the Confederate flag in the wake of the racially motivated massacre at the Emanuel African Methodist Episcopal Church in Charleston, South Carolina, that left nine black people dead.

"He sounds completely defeated," Oliver says of President Barack Obama as the president spoke of yet another shooting. "It's still hard not to feel disillusioned watching the most powerful man in the world sound so hopeless."

Controversy surrounding the flag arose after it was the only flag not to fly half-mast at the South Carolina State House after the shooting. According to Oliver, no symbol more aptly represents the motives of this hate crime than the Confederate flag.

Oliver pushes Americans to ask themselves why it's still used in any official capacity, and contends that it should only be used to "identify the worst people in the world."

"Politicians [in South Carolina] go through comical contortions to avoid criticizing it," Oliver says of the flag's power in the South. Senator Lindsey Graham defended its use by saying "this is part of who we are" even though "it's been used in a racist way."

"In fact, I believe the first time the flag was 'used in a racist way,' was the exact second they finished sewing the very first one," Oliver says.

The Confederate flag reportedly can't be taken down or lowered without a two-thirds majority vote in both chambers of the state assembly. "They were originally going to make it three-fifths," Oliver says of the vote, alluding to the infamous 1787 compromise that determined value of a black person during slavery.

However, Oliver doesn't stop there. Not only should states using the flag remove it, but they should put it away permanently in a box labeled "bad flag."

As Jon Stewart emotionally argued after the shooting, it is humiliating, at best, for black Americans to have to drive on streets and bridges named after Confederate generals or looks at their state flag, such as Mississippi's, which includes the Confederate flag in it.

It is time to move on from an era which regards blacks as second-class citizens. Enough with the "bad flag."