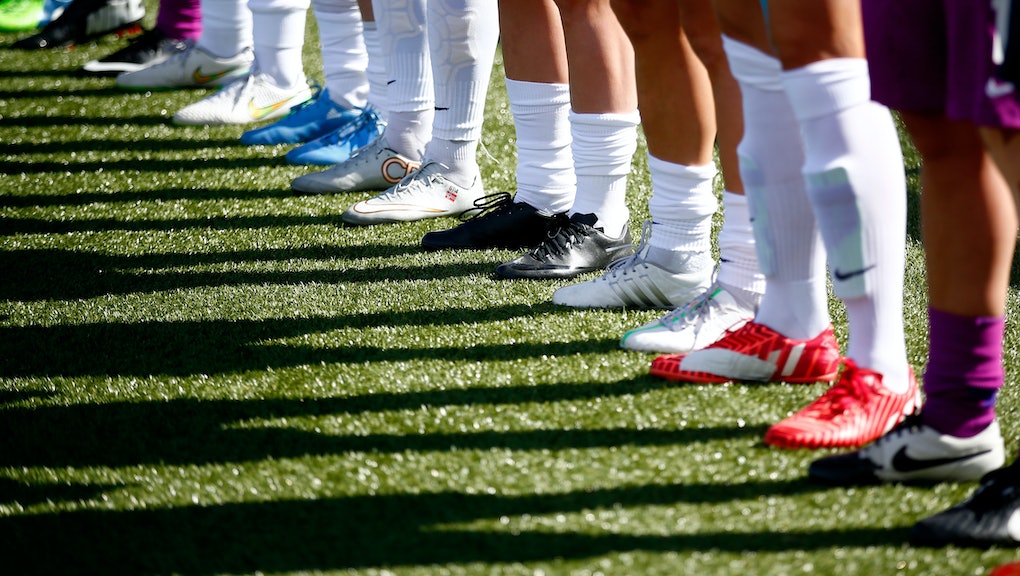 Female athletes and their fans alike have demanded respect and equal opportunities on the field for years. Across sports, these athletes share an experience their male counterparts rarely (if ever) face: rampant sexism. It's an issue the Norwegian Women's Soccer team — who also happen to be finalists in this year's Women's World Cup — took on in a sarcastic new video that skewers every sexist misconception about their team and female athletes in general.

"We're shit," Trine Ronning, a defender on the team, says. "We suck, plain and simple."

Ronning's teammates echo this sentiment. Forward Emilie Haavi notes she often touches the soccer ball with her hands and struggles with free kick situations, while teammate Cathrine Dekkerhus admits she can only complete a mere 25 kick-ups — and even then only with a balloon.

"Goal kicks are a real nightmare to me," says goalie Ingrid Hjelmseth, who has been ranked among the best in the world. "The goal is just way too big," she continues. "There ought to be two of us."

Then there's the trouble off the field: Dekkerhus says her good looks forced her to switch teams, she notes, because her teammates fell in love with her.

"I panicked," she tells the video's host. "So I had to switch teams. ... Lesbians everywhere. It's teeming with them."

The players also make helpful suggestions to FIFA for new rules that would help accommodate their lady-centric inferiority, including a smaller soccer ball and "free throws" instead of free kicks.

While this team chose to skewer the sexist attitudes they have faced as athletes (and which other female athletes certainly have and continue to face), sexism is evident on all levels of the industry. A recent University of Southern California study found, for example, that TV coverage of women's sports has remained stagnant over the past 25 years, and another study found that the number of women in sports journalism declined from 17% to 10.2% from 2013 to 2014.

Hopefully Norway's unique approach to this long-standing problem will encourage some to question their preconceived notions about female athletes' abilities. And if this parody didn't get the message across, perhaps tuning into the Women's World Cup finals and watching these talented ladies own the field in real time will do the trick.