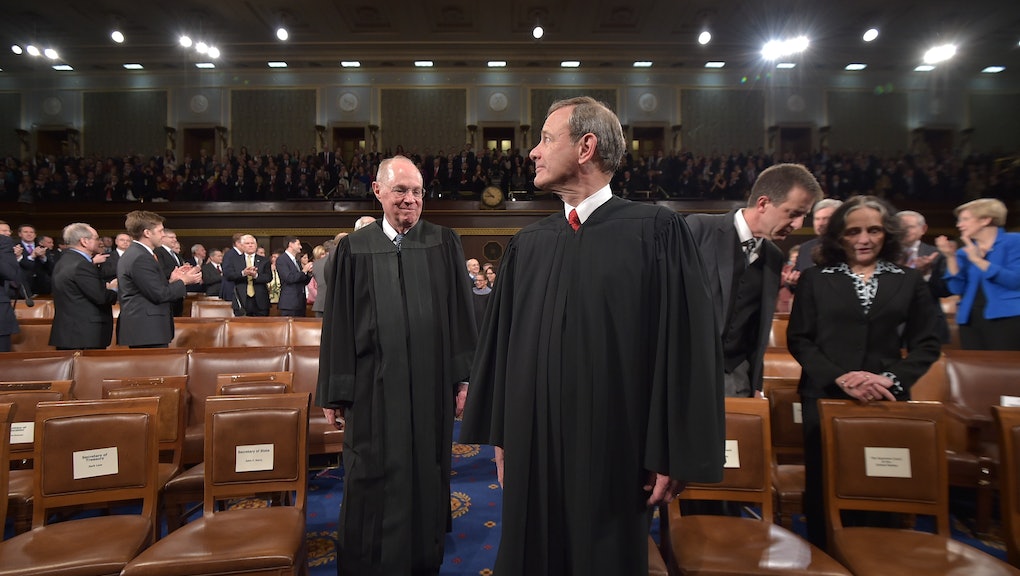 The Supreme Court Just Saved a Key Portion of Obamacare

By a 6-3 vote, the Supreme Court on Thursday ruled against a conservative challenge to the Affordable Care Act that would have denied federal subsidies to people in 34 states, upholding a key part President Barack Obama's signature domestic policy achievement.

Chief Justice John Roberts, who in 2012 crossed the ideological divide to cast a decisive vote against a constitutional challenge to Obamacare, authored the opinion for the majority.

"The statutory scheme compels the Court to reject petitioners' interpretation because it would destabilize the individual insurance market in any State with a Federal Exchange, and likely create the very 'death spirals' that Congress designed the Act to avoid," Roberts wrote. He was joined by Justice Anthony Kennedy, who voted against Obamacare in the 2012 case, and the liberal bloc, including Sonia Sotomayor, Ruth Bader Ginsburg, Elena Kagan and Stephen Breyer.

Good news for... Republicans? By ruling against the lawsuit, known as King v. Burwell, the court also decided to spare Americans what would have been a high-stakes political drama. Had the ruling gone the other way, mostly Republican governors and GOP-controlled state legislatures would have been faced with a difficult choice: allow millions of citizens to lose their health insurance or reject what has become party orthodoxy and craft a fix, likely in the form of hastily assembled exchanges.

Congressional leaders would have come under pressure to author or allow some kind of amendment to the law, the simplest path to preserving benefits to the millions set to lose them. But there is little evidence to suggest any real plan ever existed. Eradicating Obamacare has become a matter of doctrine in the Republican party over the past five years. Signing off on legislation to save it would have been, to the GOP hardcore, a kind of political treason.

The argument: The challenge in King v. Burwell centered on a four-word phrase in the statute, which said the federal government can provide tax credits to people purchasing insurances through an exchange "established by the State." This translates to hundreds of dollars in aid monthly to people who could not afford insurance without it. The conservative legal groups who helped form the rationale for the case reasoned that cutting off federal dollars to people in the 34 states without their own exchanges would ultimately make the law untenable.

The Department of Health and Human Services estimated that 6.4 million Americans would have lost their subsidies, an average of $272 every month, and be forced or choose to drop their coverage. With the pool of buyers diminished, the ripple effect would have seen prices skyrocket, with average national premiums jumping 287%, according to the Kaiser Family Foundation, sending Obamacare into a "death spiral."

The case arrived at the Supreme Court after the 4th Circuit Court of Appeals rejected the conservative argument against federal subsidies, ruling the IRS was permitted under the statute to continue providing credits to people in states without their own exchanges. But on Nov. 7, 2014, the high court revealed it would hear the arguments itself. That decision suggested at least four of the justices — the minimum necessary to grant a case — were at least open to reversing the lower court's decision.

In the end, though, the case was flimsy and the justices delivered a definitive rebuke. Obamacare, once again, has been affirmed as the law of the land.