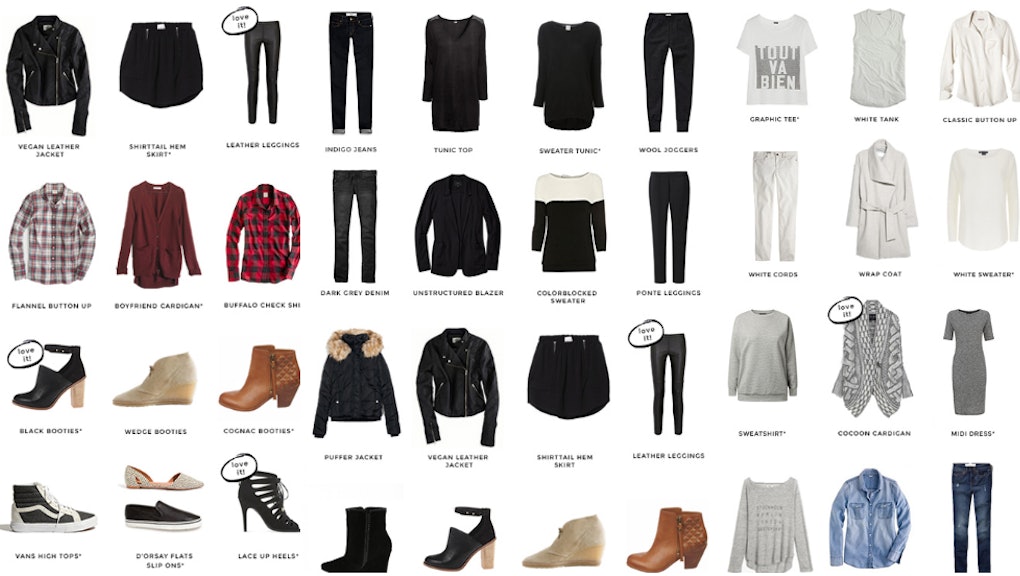 In the past three years, Emily Torres has reduced her wardrobe by two-thirds.

"I love getting dressed in the morning more than ever," the blogger behind Minimal Millennial told Mic. "Marie Kondo's book, The Life-Changing Magic of Tidying Up, has really given me a new perspective on ownership and getting rid of things that no longer suit me or spark joy in my life."

If you aren't familiar with Kondo's book and the dramatic response it's elicited (it's now an international best-seller) the short explanation is that Kondo, a Japanese organizing consultant, encourages people to throw away anything that doesn't "spark joy." Sounds kooky, but then there's Drew Barrymore lamenting on Refinery29, "My closet keeps getting larger and larger with this unhealthy diet of shopping without clarity. What am I looking for, really, and why can't I find it?"

The new trend in fashion: getting rid of everything.

Well, not everything. But fashion minimalism is catching fire, as fashion lovers and professionals like Torres dump the majority of their closets and figure out ways to express their style without blowing their bank accounts or their time. According to Elizabeth Cline, author of Overdressed, women in the 1930s owned an average of 9 outfits. Today, Americans are buying around 64 garments a person annually, and not even wearing them: Clothing resale site Threadflip surveyed women ages of 18 to 54 and found that the average woman only wears 51% of her closet.

That means nearly half of your wardrobe goes untouched each year anyway.

The more-is-more mantra that previously ruled our fashion philosophies — just picture Cher's conveyor belt wardrobe in Clueless and Andy's never-repeated outfits in The Devil Wears Prada — is being replaced by a liberating ethos: Living with less can be freeing, can help eliminate stress and clutter and can kill the habit of shopping mindlessly. It may even make you a more ethical shopper. It's ultimately a call to shift focus from the material to the internal, from rabid consumerism to thoughtful curation.

So how extreme does it get?

Get your wardrobe down to just 33 items.

When blogger Courtney Carver first wrote about her mission to simplify her life by paring down her closet, in 2010, she didn't realize just how quickly it would catch on. "I was trying to simplify my life, she told Mic, "I realized that much of the clutter and chaos was in my closet. My closet was overflowing and I never had anything to wear. It was crazy-making."

She called the experiment Project 333 with the commitment to wear just 33 items in her closet, which she rotates by season. The approach caught on: Project 333 boasts over 27,000 Facebook followers, ostensibly joining Carver on her mission to simplify getting dressed, and Carver now speaks at events around the country coaching others in a minimalist approach to fashion.

Or rotate between a set number of items every three months.

Blogger Caroline Rector, a self-proclaimed former shopaholic, advocates a system similar to Project 333, but a little more forgiving: the rotating "capsule wardrobe," which she describes on her blog Unfancy as "a mini wardrobe made up of really versatile pieces that you totally love to wear."

For Rector and her thousands of followers, that means a 37-piece wardrobe including tops, bottoms, dresses, outerwear and shoes, that you switch out every so often to fight seasonal outfit fatigue.

"We tend to assume that more choices equals better options and greater satisfaction, but it actually causes anxiety and limits creativity. The more I've limited my choices in my wardrobe, the happier and more creative I've felt. It's so refreshing to open my closet door and find a clutter-free zone, filled with all I need and nothing I don't," Rector wrote on her blog.

Or just wear the same thing every single day.

Rather than constantly rotating, another option is to just pick something and stick with it. Matilda Khal, a 27-year-old art director, recently set the Internet buzzing with a personal essay for Harper's Bazaar in which she revealed she's worn the same thing to work every day for the past three years.

"The uniform has to do with being in control over your own life and daring to put your skills and intelligence in the focus," she told Mic. It's also about not becoming disillusioned about what you have: Khal's weekday wardrobe never changes, but she wears whatever she wants on weekends.

"Since I don't wear my regular wardrobe as often now, I've learned to appreciate it more. I never open my wardrobe on a Saturday and feel like everything is boring," she said.

There's more than one good reason to ditch it all:

The less-is-more approach has implications beyond time, money and stress saved. According to a new documentary called The True Cost, Americans purchase over 80 billion pieces of new clothing per year and throw away 82 pounds of it per person annually. Our voracious appetite for clothes is fed by factories in places like Bangladesh, where workers suffer under devastating conditions and low wages.

While all signs seem to point to minimalism as an answer, many women worry it drains fashion of its fun. "I like the idea of a more purposeful wardrobe ... so every piece is one you love, not just something you bought on a whim. However, the shopping side of me sheds a little tear for all the cheap, trendy pieces that could have been," Jennifer Assmann, a project manager, 30, told Mic.

"These movements all seem 'anti-fashion' by nature. Isn't fashion about experimentation and expression? My gut says that the restrictiveness of all of these concepts, while convenient and functional, works against what fashion is all about," added Wetherly Collins, 29, a marketing and communications director.

Many of us will still crave some fashion kicks, especially the thrill of a new purchase. But operating with less could be the game-changer our hectic lives need, especially when we only wear a small fraction of our clothes — and when curbing our fashion appetites is the most ethical decision.

"The hardest thing is always fear; fear of not having enough, fear of people noticing and fear of getting bored," Carver told Mic. "After only a few days though, the fear is usually replaced with ease and joy."