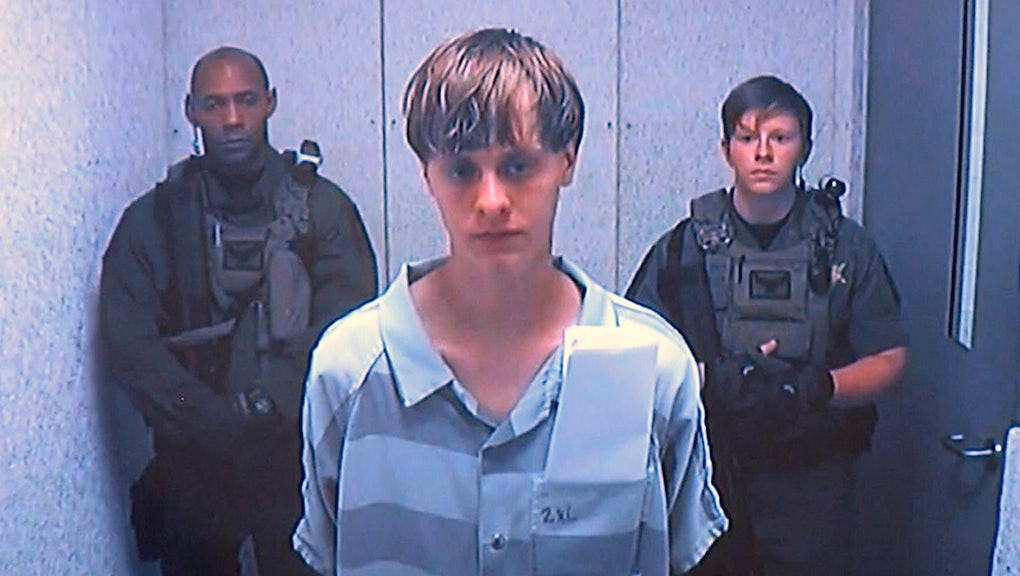 If the Charleston Shooter's Beliefs Scared You, Here's Who You Really Need to Worry About

Americans tend to think of white supremacy as a fringe belief system. Neo-Nazis, Ku Klux Klansmen — these are our dreaded "white supremacist" bogeymen, whose philosophies, though troubling, surely lurk far on the outskirts of mainstream political thought.

Americans are fooling themselves.

None of what's written is particularly surprising. Roof's words are the same racist refrains we've heard for centuries. What's surprising is that we keep acting like these aren't the same beliefs held by countless politicians, law enforcement officials and any number of other powerful players since our nation's inception.

In fact, Roof shares his own beliefs with multiple organizations and individuals who have operated at high positions of political influence in the United States in the past several years. It's a reminder that white supremacists aren't just hooded crazies who gather in the woods to burn crosses at night. They often are — and always have been — our senators, representatives, police officers and military members as well.

Cruz's campaign quickly refunded their donation, while Paul's is donating his to assist the Charleston victims' families (Santorum's campaign did not respond to the Times' request for comment). But the ideological support of known white supremacists — though apparently not reciprocated by these candidates — speaks to a broader intertwining of hate groups and American politicians today.

The Daily Beast reported four years ago that at least nine 2010 political candidates had been described as "white supremacists or white nationalists" by the SPLC. One of these candidates, former state Rep. Loy Mauch, won a seat in the Arkansas House of Representatives, while another, James C. Russell, "garnered 37% of the vote in his quest for the New York House of Representatives," according to the report.

House Majority Whip Steve Scalise (R-La.) faced criticism recently after it was revealed that he spoke at a white supremacist rally in 2002. He reportedly also received campaign funds from Kenny Knight — then-adviser to former KKK-leader and ex-member of the Louisiana House of Representatives David Duke — in 2008.

These indicators of white supremacist political mobilization come amid a rise in the number of hate groups over the past decade, especially since President Barack Obama's election.

2. White supremacists in the military

Reuters reported in 2006 that the U.S. Department of Defense had been ramping up its efforts to combat a growing concern: the infiltration of skinheads and neo-Nazis into the American armed forces.

Two years later, the Southern Poverty Law Center reported that the problem had worsened — an FBI report found at least a dozen instances of active duty service members or veterans of the wars in Iraq and Afghanistan who espoused white supremacist beliefs.

According to a 2009 SPLC report, their reasons for joining the military are straightforward: access to weapons and to training. The concern, of course, is that these soldiers are tasked with carrying out the U.S.'s foreign policy ambitions, particularly those involving the use of force. The involvement of military veterans in a number of hate crimes in the U.S. — notably Wade Michael Page's lethal attack on a Sikh Temple in Wisconsin in 2012, which left six dead — does little to assuage these concerns.

Earlier this month, two police officers in Anniston, Alabama, were placed on administrative leave — one was eventually fired, while the other retired — when the SPLC revealed their membership in the "neo-Confederate," separatist hate group the League of the South, Gawker reported.

In a video that accompanied the revelation, one of the officers, former Lt. Josh Doggrell, recounts a conversation he allegedly had with the department's then-police chief, who apparently knew about Doggrell's involvement with the group.

"We pretty much think like you do," the chief allegedly said.

This is just the latest in a string of recent incidents in which American police officers have been caught openly subscribing to white supremacist beliefs. Between 2009 and 2014, at least three police officers in Fruitland Park, Florida, were fired when it was revealed that they were members of the local Ku Klux Klan chapter, according to USA Today. In April, seven San Francisco police officers were also fired when text messages in which they made remarks about "lynching African-Americans and burning crosses" became public, the New York Times reported. One text simply read, "White Power."

And Reuters reports that three Florida state prison guards — who were also revealed to be members of the KKK — were charged in April with conspiring to kill a black former inmate by injecting him with insulin then making it look like he drowned.

The takeaway: Incidents like this suggest that explicit white supremacist ideology is not just the purview of fringe radicals. It's a foundational American belief system that has been woven into the mainstream culture for centuries. Politicians, police officers, soldiers and more — all have exhibited the capacity to house hate group members and supporters, even to this day.

Perhaps the ideals of the Charleston shooter are not so outlying as many assume.