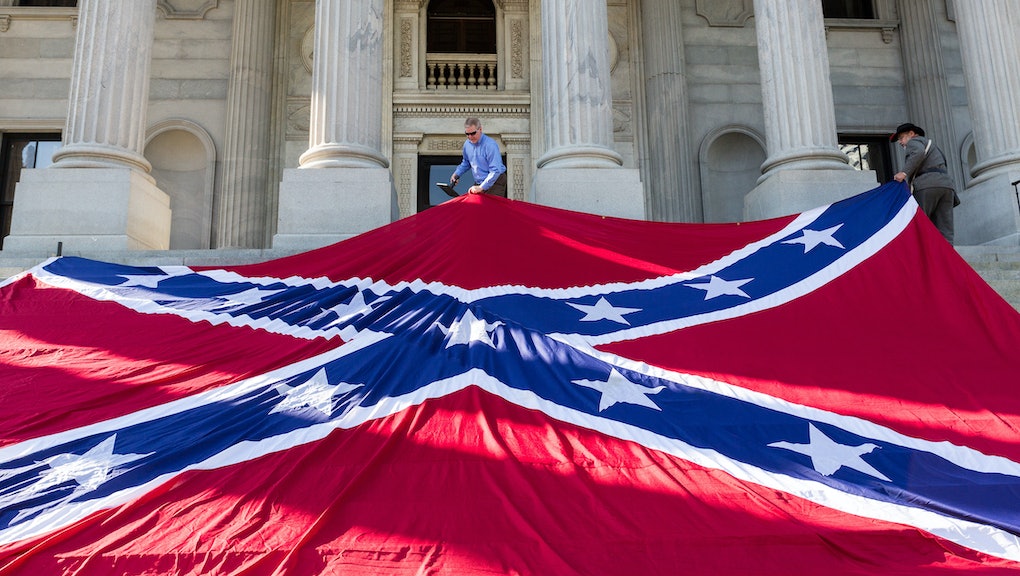 Don't Forget, One State Still Has the Confederate Battle Flag on Its Official State Flag

In the aftermath of the Charleston massacre in South Carolina, controversy surrounding the Confederate battle flag reemerged after the South Carolina State House in Columbia not only left the Confederate flag flying but didn't lower it to half-staff, unlike the slew of nearby state and national flags.

In a historic move on Monday, after mounting public pressure, South Carolina Gov. Nikki Haley, who initially said she could and would do nothing, asked the Confederate flag be removed.

While many agree it's egregious the symbol of the pro-slavery Confederacy has been flying at the State House, what's perhaps even worse is the fact that it's prominently featured within Mississippi's official state flag.

A 2001 referendum to change the state flag was unsuccessful after two-thirds of the voters opted to keep the original design, which has officially represented the state since 1894.

There have been various petitions to change the Mississippi state flag over the years, each with meager support. But one MoveOn.Org petition started in the days since the shooting had collected more than 2,700 signatures at the time of publication and is steadily gaining traction.

"In the wake of the devastating hate crime perpetrated at Mother Emanuel AME in Charleston, it is time to remove all symbols of hate ... from state and other government buildings," Jennifer Gunter, the petition's author, wrote. "It is time for us to come together and move into the future in solidarity."

The Confederate flag and its meaning has sparked public debate in the past week. The hateful and racist manifesto of Dylann Roof, the 21-year-old Charleston shooter, features photos of him posing with the Confederate flag, while burning the American flag in others, making the matter even more contentious.

Being black in Mississippi. The inclusion of the Confederate flag in Mississippi's state flag is sadly representative of the black experience there, which, according to major social indicators, shows black people to be second-class citizens.

Mississippi's population has the highest proportion of black people amongst all 50 states, at more than 37%, according to the U.S. Census Bureau. Additionally, Mississippi is the poorest state in America, where just over 24% of the state lives under the poverty line. A 2009 report from Measure of America noted salaries for white people ranged from $22,000 to $38,000, but just $13,000 to $25,000 for black people.

The South needs to do some soul-searching. While Mississippi's harkening back to the Civil War is more explicit, there are six other states with flags that allude to the Confederacy. According to the 2010 census, approximately one-third of the country's black population live in states whose official flags incorporate symbols of the Confederacy, reports the Independent.

A brief glance at American history makes it hard to deny the racial significance of the Confederate flag.

"Our new government is founded upon exactly the opposite idea; its foundations are laid, its cornerstone rests, upon the great truth that the Negro is not equal to the white man; that slavery, subordination to the superior race, is his natural and normal condition," Vice President of the Confederacy Alexander H. Stephens said. "This, our new government, is the first, in the history of the world, based upon this great physical, philosophical and moral truth."

The tenacious presence of the pro-slavery symbol speaks volumes about racial inequality in America, particularly as it pertains to black-white relations. The country cannot fully move forward until it purges itself of pro-slavery symbols and ideology.