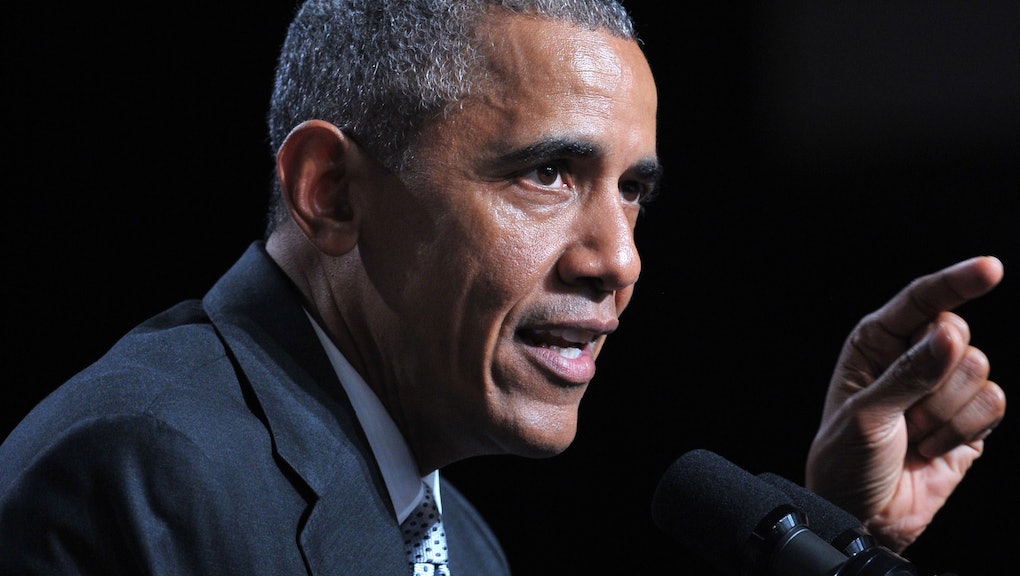 Barack Obama is frustrated. Anyone watching the president address the racist church shooting in Charleston, South Carolina, last week — reportedly his 14th time talking about a mass shooting on U.S. soil, aside from racially charged police violence against people of color — can see it.

At a fundraiser in Beverly Hills last week, he took attendees back to the days of 2008, when the mere possibility of his candidacy signaled a shift in uprooting racism in America.

Then on Friday, in Marc Maron's WTF podcast, Obama used perhaps America's most controversial racial slur to refer to the problems with race America is still dealing with:

"What is also true is that the legacy of slavery, Jim Crow, discrimination in almost every institution in our lives — that casts a long shadow. That's still part of our DNA, that's passed on. We're not cured of it... And it's not just a matter of it not being polite to say 'nigger' in public. That's not the measure of whether racism still exists or not. It's not just a matter of overt discrimination. Societies don't overnight completely erase everything that happened two to 300 years prior."

Obama's statement caused many to question why the president of the United States would tarnish the office with such language.

However, it would be foolish to believe that, in the 226 years since George Washington (a slave owner, by the way) took office, no other president has ever uttered that racially loaded term. If they did, it was more likely than not in a manner that demeaned black people, and not one that addressed the complexities of racism. As this tweet puts it:

Of course, there are no concrete records to verify whether every single president who has served has used this term, but there's no doubt that the sentiment rings true for many. Especially since this president has been on the receiving end of this term throughout his presidency.

There are a few well-known examples of this. In the 2008 documentary The N Word, a recording of President Lyndon B. Johnson included him saying, "There's more niggers voting [in Texas] than white folks." In another instance, Johnson also reportedly said, "I'll have those niggers voting Democratic for the next 200 years," while aboard Air Force One.

A couple of years later, President Richard Nixon was also recorded telling Secretary of State Henry Kissinger, "Henry, let's leave the niggers to Bill, and we'll take care of the rest of the world," while preparing his first address to Congress. According to AlterNet, he continued to use the term "nigger" and the even more antiquated "jigaboo" while talking to Kissinger during one of his many recorded moments in the White House.

In addition to these two being on the record for using the word "n*gger," 12 of our 44 presidents owned slaves at some point in their lives, and eight of them owned slaves while serving as president, according to Western Washington University librarian Robert Lopresti. The list of lifetime owners includes Washington, Zachary Taylor and even Ulysses S. Grant, who fought as a general to abolish slavery in the Civil War. While it's not absolutely clear whether these men used the term while in office, there's no doubt the sentiment was apparent for those who owned slaves without shame.

As far as we know, Obama is hardly the first commander-in-chief to use this slur, and he probably won't be the last. At least in his case, we know it was an attempt to list the problems with racism this country is still grappling with, and will continue to face for years after Obama leaves office. With any hope, we'll live in a future that can claim "Yes, we did" end racism.