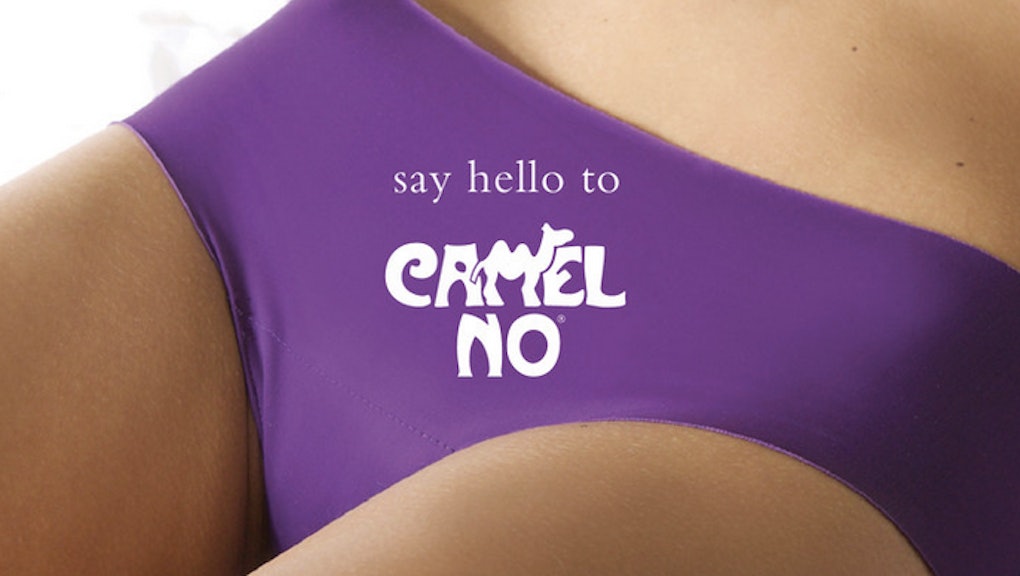 Are These the Anti-Camel Toe Underwear Women Actually Need?

A horrible sense of embarrassment can befall a woman who tugs on too-tight leggings that proceed to pull at a certain spot... until her private parts are not so private anymore. Yep, we're talking about that dreaded "camel toe," an experience embarrassing and traumatic enough to inspire entire songs.

And products: Yet another entrepreneur has arrived with anti-camel toe underwear to save the women and their lady parts, this one cleverly called the "Camel No."

The line of underwear, made by Seamless Thread, comes with a silicone liner, founder Maggie Han told Mashable. Women shouldn't be left feeling bad about their bodies and therefore unable to address the issue, she said.

"I always was conscious of my own camel toe," Han told Mashable. "I'm 5-foot-11. If I have camel toe and I walk into a conference room, it's at everyone's eye level. I'm tall, and obviously the taller you are, the more visible to someone's eyes your camel toe will be."

Entrepreneurs coming for our camel toes: It's a sentiment echoed by a woman named Tish, who wrote online in 2010, "I don't know about ya'll, but there's nothing worse than a front wedgie while I'm working out. Not only is it embarrassing, it also feels like my clothes hate me and are punishing me."

Tish was writing about another product, Camelflage, which launched at least five years ago to solve the same camel toe problem. Camelflage bills itself as"The Original Visual Privacy Undergarment" and its website addresses the body shame associated with it: "You will feel safe and secure knowing you aren't 'that girl' everyone is laughing at behind your back."

Another inventor, Collette McCrarren, came along in 2013 peddling her anti-camel toe garment, the bodiBase, after spending years feeling "paranoid" wearing lackluster sports undergarments, according to the Daily Mail. Among the other products marketed at "solving" the problem are reusable liners and plastic cups (sounds comfy!).

A problem we don't all have: And yet somehow, none of these products have taken off to the extent that, say, Spanx did (which was valued at over $1 billion by 2012). Perhaps marketing that tries to capitalize on women's body shame is falling on deaf ears. Or maybe all the anti-camel toe products are catering to a problem that not all women — perhaps even most women — really have.

In fact, the way underwear trends are actually going, fewer women than ever are contending with camel toes. According to the New York Times, young women are forgoing thongs in favor of "granny panties" — aka, underwear that are pretty good at preventing camel toes on their own.

For those of us who still are grappling with the NSFW look? Celebrities like Khloe Kardashian have made light of their own visible, front wedgies online. Khloe's even named it "Camille," as in, "Oh, Camille the camel is trying to say hi! I hope she listens today."

We could pony up for the latest anti-camel toe underwear, or, more likely, just embrace our own Camilles. Or, you know, just eschew thongs altogether.