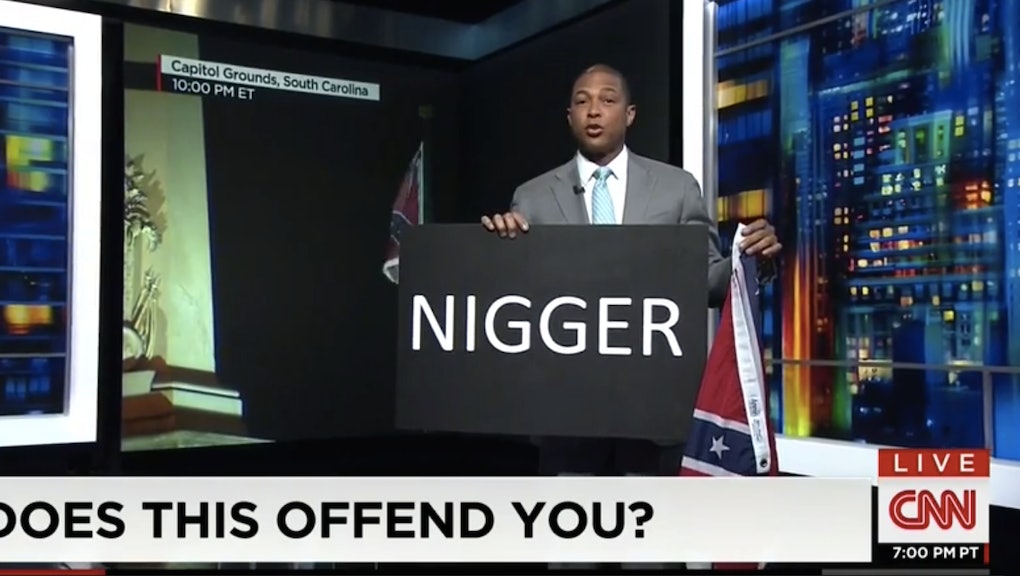 CNN Tonight host Don Lemon outdid himself Monday evening when he held up a giant sign that said "NIGGER" with with the words "Does this offend you?" emblazoned across the bottom of the screen.

Exactly the point he was trying to make, no one is sure. But one thing's for certain: Despite being a country that is desperately struggling to heal from its gaping racial wound, it can still tell the difference between someone straight-talking and someone exploiting racism for shock value.

"What is also true is that the legacy of slavery, Jim Crow, discrimination in almost every institution of our lives: That casts a long shadow. And that's still part of our DNA. That's passed on," Obama told Maron. "We're not cured of it—racism. We're not cured of it. And it's not just a matter of it not being polite to say 'nigger' in public."

Obama's interview is perhaps an example of how to use the word powerfully and not sugarcoat racism as distinct from the CNN anchor's attempt at shock value.

As these things go, it didn't take long for Lemon to be made, well, an Internet Lemon. The phrase quickly started trending on Twitter, along with memes of his foundered segment.

The Charleston, South Carolina, massacre has prompted a number of important discussions among pundits and the country as a whole, including pressing issues such as race relations, gun control and the use of the Confederate flag. But there is a difference between meaningful dialogue and sensationalization. It would appear Lemon's show fell into the latter category.

However, the country's response to him offers a different story. It reveals a resistance to using race in a flippant way and a call to take it seriously.