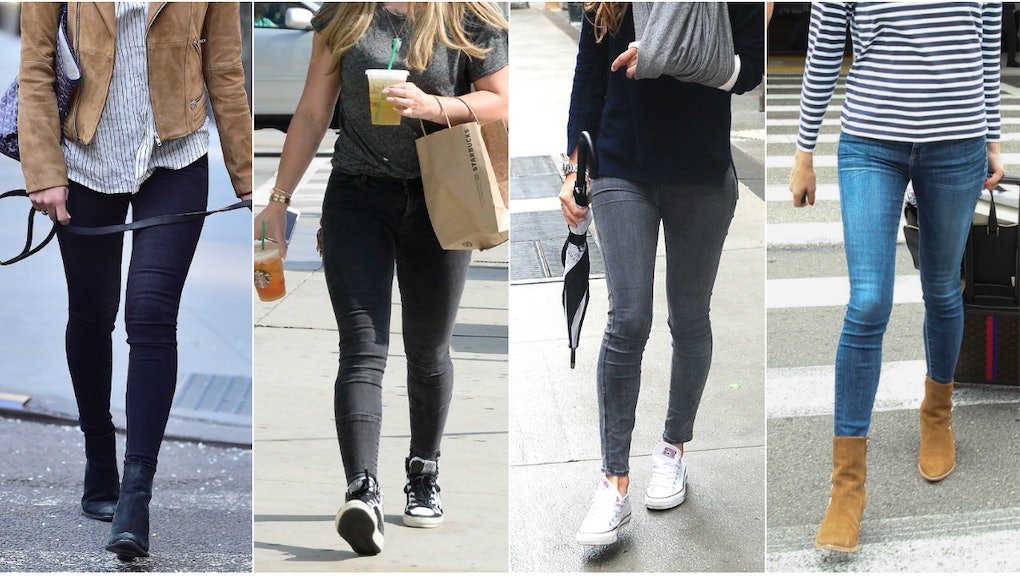 We knew that this was bound to happen: Some study, somewhere, was going to come along and inform us that our favorite skinny jeans are harmful to our health.

As it turns out, they can be — at least when you're squatting in those skinnies for hours on end.

The study: All that squatting can cause nerve damage to your lower legs, according to a brief new report released in the Journal of Neurology, Neurosurgery and Psychiatry. In the report, doctors recount the story of an unnamed 35-year-old woman who spent hours squatting in skinny jeans while emptying out kitchen cupboards. Hours later, she was on the ground unable to get up and was rushed to the hospital, where her jeans had to be cut off her severely swollen legs, according to the report. She reportedly ended up spending four days in the hospital.

The combination of wearing tight pants while squatting is believed to have caused the incident, Thomas Kinder, of the Neurology Unit at the Royal Adelaide Hospital in Australia who lead the study, told the Los Angeles Times. Squatting can lead to the compression of nerves near the knee joint and reduce blood supply to the calf muscles, the report notes:

The wearing of 'skinny' jeans had likely potentiated the tibial neuropathies by causing a compartment syndrome as the lower legs swelled.

Avoiding the skinny jeans, however, might have prevented the situation altogether.

"If the woman had been wearing loose trousers, the calf muscles could have swollen 'outwards' rather than 'inwards,' thus avoiding pressure on the nerves and blood vessels," Kinder told the Times. (Mic reached out to the study authors and has not heard back as of publishing.)

Too tight to be healthy: This reported incident "represents a new neurological complication of wearing tight jeans," the authors note. But we've already known our jeans aren't ideal: Wearing pants that are too tight around the waist can also lead to "tight pants syndrome," according to Dr. John Michael Li, a neurologist at Rush University Medical Center in Chicago, CBS Miami reported. The "syndrome": Wearing pants that are, say, three inches too small for one's waist can prompt heartburn and abdominal aches, according to CBS.

Oh, and in case those skinnies weren't loathsome enough, Pacific Standard has helpfully rounded up a few other ill effects, such as mild infections of the vagina or abnormal sperm.

Luckily, most of the studies examining skinny jeans over the years conclude with claims that are "mild, unproven, or relatively rare," according to Pacific Standard. But one thing is clear: Tighter clothes just aren't as comfortable or good for our bodies as loose clothing. Spanx and other shapewear have a host of negative ramifications, like the compression of your intestines, which can lead to acid reflux and heartburn, according to gastroenterologist Dr. John Kuemmerle, who spoke to the Huffington Post. Shapewear can also restrict a person's ability to breathe properly, the Boston Globe reported.

Beauty is pain? All the tight clothes, it should be noted, are just additions to an already challenging wardrobe for women, which includes high heels that are proven to cause injuries and painful foot conditions. This begs the question: Must beauty, especially for women, always be pain?

The real lesson here is probably this: Bring back the mom jeans and sneakers.