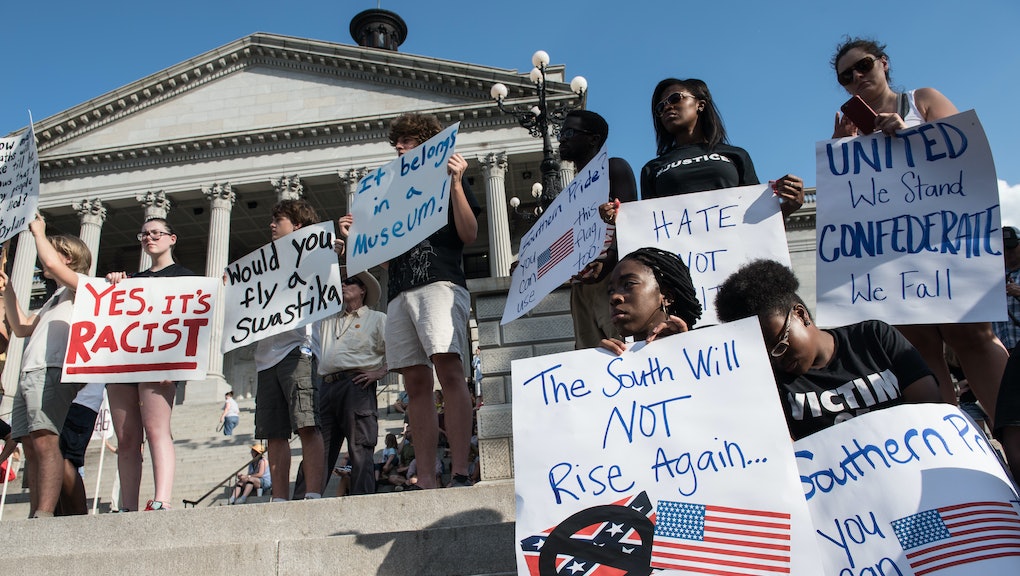 John Legend tweeted about a very Mississippi problem Monday night. As part of its official state flag, the Confederate rebel battle flag sits in the top lefthand corner, and people are calling on the state to change it.

Mississippi House Speaker Philip Gunn became the most high-ranking member of the Republican Party to join Legend in his stance, calling for his state's flag to be changed.

"We must always remember our past, but that does not mean we must let it define us," Gunn said in a statement, according to the Associated Press. "As a Christian, I believe our state's flag has become a point of offense that needs to be removed. We need to begin having conversations about changing Mississippi's flag."

And on Tuesday, Virginia Gov. Terry McAuliffe announced he is moving to have the flag removed from state-issued vanity license plates, saying, "Even its display on state issued license tags is, in my view, unnecessarily divisive and hurtful to too many of our people."

The comments came after a historic press conference, in which Republican South Carolina Gov. Nikki Haley requested the Confederate flag be permanently taken down from the South Carolina State House.

Her plea came amid controversy around the Confederate flag flying at the State House after the Charleston massacre, an affront to many made worse by the fact it was the only flag to not fly half-mast. This became a national issue, prompting the hashtag #TakeDownTheFlag, which is now being applied to other Confederate-inspired flags.

However, the matter of changing the Mississippi flag and removing all official symbols that represent the Civil War, an era when the South fought the North to maintain slavery, remains a hotly contested one.

Republican Mississippi Gov. Phil Bryant differed with Gunn on the matter, with a history of strongly supporting the preservation of the state flag.

"A vast majority of Mississippians voted to keep the state's flag, and I don't believe the Mississippi Legislature will act to supersede the will of the people on this issue," Bryant said in his own statement Monday, according to the Associated Press.

Bryant referenced a 2001 referendum on changing the Mississippi flag that failed after nearly two-thirds of the voters opted to keep the flag, which has represented the state since 1894.

Not only is Gunn a high-ranking GOP lawmaker, but he is also the first elected Republican in Mississippi to formally request the state flag be changed. While the Republican Party has been more resistant than the Democrats to the banishment of Confederate symbols, Monday marked a notable shift in conservative political tides. Two powerful GOP politicians from southern states, with deeply rooted histories of slavery and racism, strongly came out in opposition of the Confederate flag's use in any official capacity.

The movement is gaining momentum and it seems now to be only a matter of time before America truly confronts its history of racism, starting with unfettering the symbols of slavery.