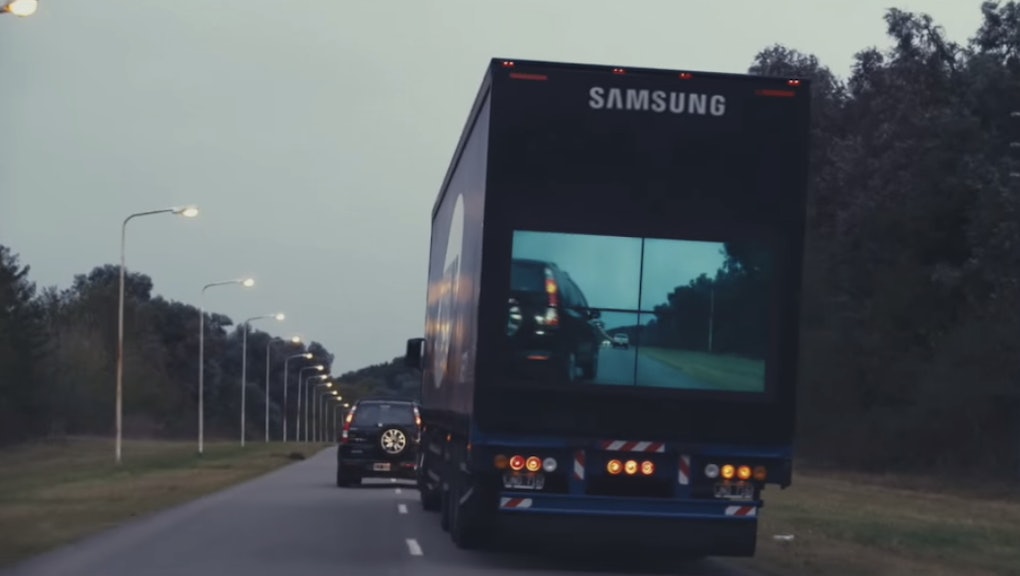 All drivers know how difficult and scary it can be to pass a truck on a single-lane street, hoping for our lives that there are no oncoming cars. If only you could see right through them.

This week, Samsung debuted a new vision for how to solve the problem: transparent trucks. The concept was inspired by truck-related fatalities in Argentina, where single-lane roads lead to daily deaths from cars trying to overtake trucks.

The trucks will have a camera on the front, which feeds the live video to four panels in the back.

Then, as you can see in all of the heroic scenes of cars safely passing trucks in the video below, a driver could see the oncoming vehicle far ahead and pass without incident. The cameras also have a night-vision mode to mitigate the terror of passing a 16-wheeler in the dark.

This isn't a new concept. The designer Art Lebedev thought up this exact scheme in 2009, and the idea of a transparent car powered by tiny cameras has been a Bond-film fantasy for years. But advances in small cameras — which are showing up everywhere from GoPros to police body cams — have finally made it a more feasible, affordable concept.

It's a big investment in our future. The Verge reports that Samsung is trying to obtain regulatory approval to make these trucks street-legal. What's holding back safer trucks, however, won't be whether or not they're ready to drive.

"The idea doesn't appear economically practical at large scale," writes Vlad Savov at the Verge. "The camera might be cheap and simple enough to install, but four displays per truck would be a major investment for any transport company to make, especially since it wouldn't lead to any direct financial benefit."

In other words, these trucks will be freaking expensive. Trucking companies will need to decide whether or not saving lives is profitable — and if long-term road safety is worth the cost.