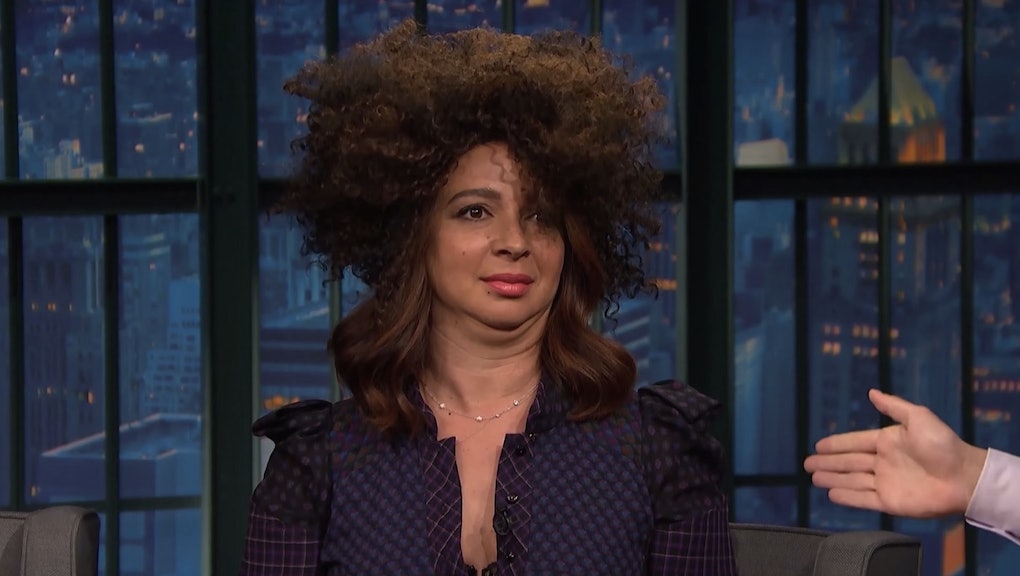 Watch Maya Rudolph Do a Ridiculous Impression of Rachel Dolezal

Much like Tina Fey with Sarah Palin before her, Maya Rudolph has been inundated with requests to play a certain cultural figure on Saturday Night Live recently. As Rachel Dolezal dominated headlines, Rudolph told former SNL castmate Seth Meyers on his show, people increasingly recognized the similarities between the two of them.

Unlike Fey, Rudolph won't be coming back to SNL to perform as Dolezal. Luckily, she gave Meyers and the Late Night audience a taste of what her Dolezal would look like — and it's a pretty ridiculous look.

In the clip, Rudolph imitates Dolezal's reaction to a Spokane, Washington's reporter's simple questions. Rudolph's simple gesture response to the question of whether her parents are white is particularly priceless.

She's imitating a particular local interview that made the rounds and brought the Dolezal story to national attention. "Are you African-American?" shouldn't have confused the former NAACP chapter director so thoroughly, yet her reaction provided much immediate amusement for the Internet.

"I gotta say, the whole thing is very fascinating to me," Rudolph said as she introduced her impression. It's easy to see why: Dolezal's story captivated a nation and spurred intense debates about identity. In the immediate aftermath of the story surfacing, however, the Vine of the interview became something of a meme.

Though the conversations and debates that happened after Dolezal became a national topic of discussion are important, the importance of performers like Rudolph, and more broadly, of Saturday Night Live, is to remind us that we can laugh at ridiculous news stories. Injecting humor gives us the ability to step away and gain some perspective. That way, when we launch back into debating, we can have a level-head.

If Maya Rudolph in a ridiculous Rachel Dolezal wig can't make us laugh at this story, nothing will.