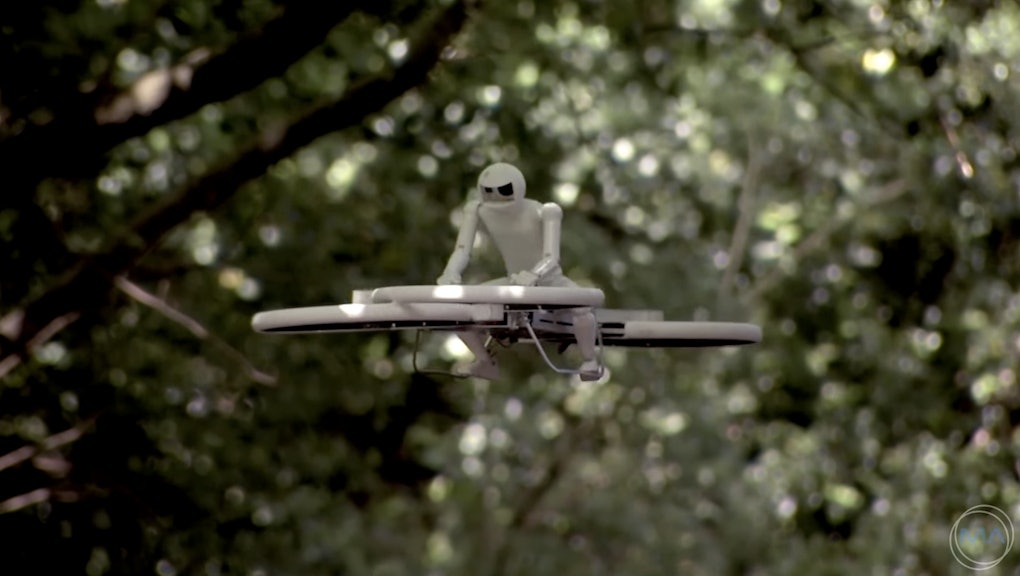 The Military's New Hoverbikes Are Straight Out of 'Star Wars'

Ever since Back to the Future 2 promised us we'd all have hoverboards by 2015, sci-fi enthusiasts have wanted to apply the same principle to motorcycles. We should have known that the government would get there first.

At the Paris Air Show this month, the United States Army announced a partnership with a company called Malloy Aeronautics that will develop a hoverbike for American soldiers. Naturally, it's cool as hell.

Hoverbikes serve the same purpose for the military as tiny helicopters. They can use their two propellers to lift heavy cargo, but they're more nimble and unassuming than a military chopper. From CNet:

Malloy Aeronautics' hybrid hoverbike works like a giant propeller drone that combines the lifting power of a helicopter with the look and feel of a motorcycle. It creates lift using two oak propellers powered by a 1,170-cc four-stroke engine and a lightweight carbon fiber body. The company claims its latest prototype has a maximum takeoff weight of 270 kilograms (just over 595 pounds) and can log a distance of 148 kilometers (just over 91 miles) on a single tank of gas.

The hoverbike was developed by Chris Malloy, who last summer finished a successful Kickstarter for the project, pulling in just over $100,000 to build the first manned prototype. Then Malloy's original backers didn't hear from him for a while. They had no idea he was working on a military contract.

The makers of the bike told Reuters that its initial uses would be transportation and cargo, but a more fanciful application would be squads of hoverbike-riding cavalry. After all, it's hard not to see the concept and not immediately picture the classic Star Wars sequence of Luke and Leia chasing down stormtroopers through the forests of Endor.

For now, the Malloy hoverbike is still in its prototype stages.

Check out the original concept video for the Malloy P2 Hoverbike below.