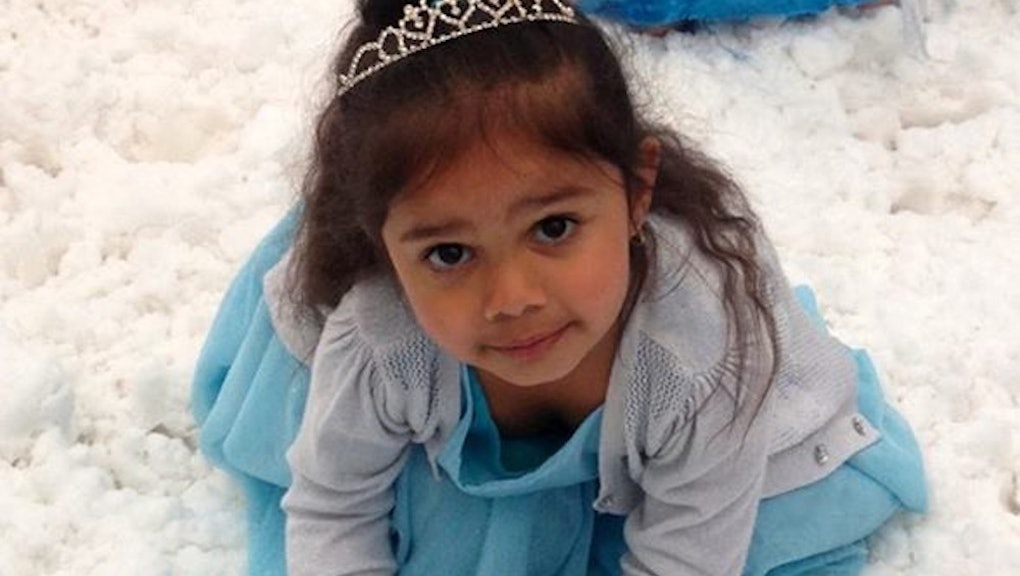 How Strangers Taught One 3-Year-Old That Black is Beautiful

Rachel Muir probably assumed the most annoying thing she and her daughter, Samara would face at a Disney-themed event in their Australian hometown would be a long wait in line. Instead, her child came face-to-face with blatant racism.

Samara, like plenty of 3-year-olds around the world, was dressed up like the Scandinavian queen Elsa from the Disney film Frozen, Muir told the Australian Courier. This outfit was apparently offensive to another mother waiting in line, who told Samara, "I don't know why you're dressed up for, because Queen Elsa isn't black."

"You're black and black is ugly," the woman's daughter reportedly told Samara when Muir pushed back on these comments.

While Samara and her mother refused to let the comments effect them in the moment, Samara was clearly disturbed by the incident. In the following days the snow pit altercation, Muir told the Courier, the girl refused to go to an Aboriginal dance class, became withdrawn and even asked her mom why she was black.

"The saddest part of it all is that racism is alive and well and the next generation are being subjected to it," Muir told the Courier. "Nobody is born into this world a racist. It is learned behaviour. It can be changed."

Strangers in solidarity: Many people have rallied around Samara and her mother, using this opportunity to create change. Plenty offered support in response to a Facebook post Muir wrote about the event, and even more since have written supportive letters and reached out to her on social media, Muir told the Courier. Indigenous rapper Adam Briggs made a video featuring Samara, and Queen Elsa herself sent Samara words of encouragement, telling the young girl to "always be yourself." She was even featured on the front page of the Courier.

After all the messages of support, Samara "is back to her proud, beautiful Aboriginal self," Muir confirmed.

While it's encouraging that Samara was supported in this way, the fact remains that countless other children of color face microaggressions daily, and they usually don't experience an outpouring of public support in the aftermath. As Ballarat and District Aboriginal Cooperative chief executive Karen Heap told the Courier in response to this incident, "We live in a supposedly multicultural society, but there is still so much more education and work that is needed to overcome racial discrimination."

Hopefully far more people will offer their support to all who experience racism — whether their stories go viral or not.