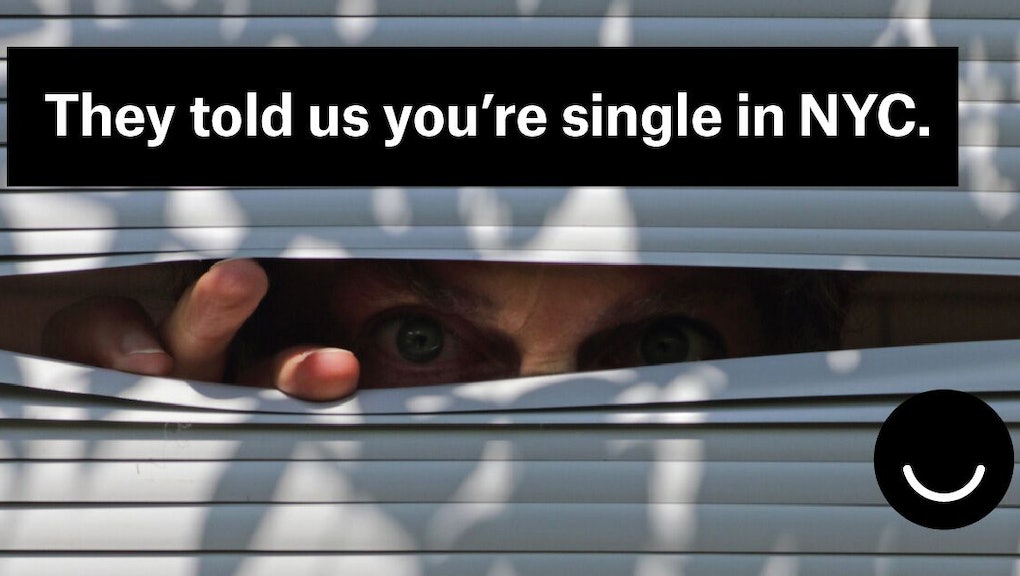 Ello turned heads in September as an anti-Facebook, anti-advertising social network. But then it lost some steam. Not everyone, it turns out, was so convinced that Facebook's advertising practices are actually creepy enough to warrant a switch in social networks.

So Ello is rolling out a Facebook ad campaign.

Starting Wednesday, Ello is going to start running advertisements on Facebook that tell you what Facebook's advertisers can learn about you. So if, through Facebook's data collection, Ello learns that you're a single person living in New York City, it'll tell you, "They told us you're single in NYC." If you're a photographer, you'll see "Photography is better without ads." After all, to the Ello founders, that's what Facebook's really for.

"Facebook is by far the best advertising platform ever invented," Ello founder Paul Budnitz told Mic. "I don't think it's a social network, but as an ad platform, I couldn't ask for something better."

What happened to Ello? The company is quietly having a good year. It's launched a mobile app, raised an additional $5 million in funding and brought in hundreds of thousands of new users. But they can't shake their reputation as the "anti-Facebook" social network, which Budnitz says he now hates.

Budnitz and the other co-founders insist that what they do is totally different from Facebook, that Ello is a social network to house artists and content and that Facebook is an algorithmic, surveillance-driven ad platform. That's the reason they want to run the campaign.

"The best way to speak about advertisements is through advertisements. And the best place to call attention to data-collection mining and manipulation is where it's done."

That is, if Facebook and the other social networks let them. But Budnitz says there's no reason Facebook would block their campaign, even if it is antagonistic.

"They're such positive ads, and they conform to Facebook's rules," Budnitz told Mic. "If Facebook does block the ads, then I'd have to ask what Facebook's afraid of."

The Facebook campaign is just the beginning. Ello will roll out ads across Tumblr, Twitter and other social networks, as well as run a series of ads on posters and billboards. Since Ello hasn't spent any money on advertising yet, Mr. Budnitz says they have hundreds of thousands of dollars to spend.

"All of these companies are saying they're one thing when they're another," Ello co-founder Todd Berger told Mic. "They're not social networks, they're ad platforms with social networking as a secondary business."

If it seems like an implicit hypocrisy that an anti-advertisement network would run advertisements, the Ello founders don't think so at all. Rather, they see it as the best way to pull open people's eyes about what's really happening when they're on their Facebook timelines.

"The best way to speak about advertisements is through advertisements," Budnitz told Mic. "And the best place to call attention to data-collection mining and manipulation is where it's done."