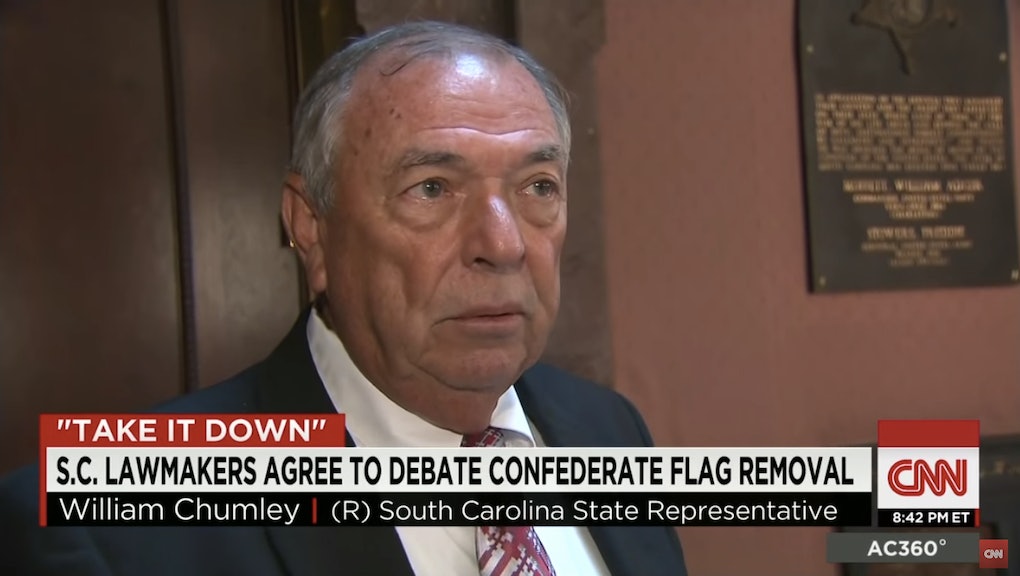 This South Carolina Legislator Blamed Charleston Victims for Their Own Deaths

A growing consensus by Republicans and Democrats to remove the Confederate battle flag from the Statehouse grounds in Columbia, South Carolina, continued to gain steam after a massacre at a Charleston, South Carolina, church left nine dead. A few die-hard lawmakers, however, have dug in for a last stand to protect the flag.

One of those defenders is South Carolina state Rep. William Chumley. In an interview with CNN Tuesday, Chumley offers the standard response given by flag defenders, then things go wildly off course. After CNN reporter Drew Griffin asks Chumley about the flag's use by hate groups, the South Carolina representative gives an extended response, ending with his observations.

"These people sat in there, waited their turn to be shot. That's sad," he says. "But somebody in there with the means of self-defense could have stopped this. And we'd have had less funerals than we're having."

A surprised Griffin then asks if it was Chumley's intention to reorient the tragedy into a "gun debate," which the Representative seems to hedge saying, "I didn't say guns" but adding, "Why didn't somebody just do something?"

While Chumley may never have said the word "gun," his intention was clear to all those who favor looser gun control in the state — an issue which the late State Senator Clementa Pinckney had opposed. On Friday, just days after the killings, a senior National Rifle Association board member, Charles Cotton, made a similar declaration on a Texas web forum, openly criticizing Pinckney for a vote against concealed carry and suggesting the reverend was complicit in the death of his flock for denying them the opportunity to be armed.

Meanwhile, the debate over the flag has largely snuffed out debate over the issue which might have actually prevented the shooting: gun control. In a press conference shortly after the massacre, President Barack Obama all but dismissed the possibility of enacting any meaningful legislation at the federal level.

"The politics in this town foreclose a lot of those avenues right now," he said. Burned from a failed effort after the Sandy Hook massacre in Newtown, Connecticut, that left 20 children dead, most in Washington appear resigned to the belief that the current carnage would not move the parameters of the debate.

Regardless of one's position on the Confederate flag or gun control, there should be an obvious consensus over who is at fault for the tragedy: the gunman, Dylann Roof. Over the last few days, the media has admirably focused much of its attention toward remembering the victims and honoring the lives they lived. Victim-blaming, however, deserves no part of the coverage and public officials like William Chumley should take care to remember that.