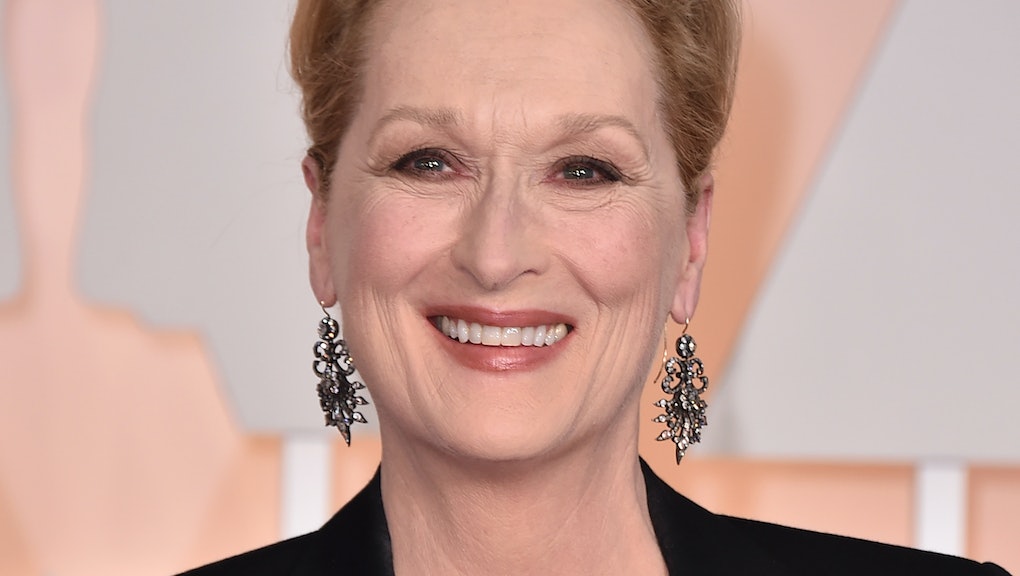 The Badass Way Meryl Streep Is Fighting for Equal Rights

Plenty of celebrities simply enjoy their fame and privilege, detached from the struggles the rest of us face, but Meryl Streep is not like some of her peers. She's taken on the underrepresentation of women in the entertainment industry for years, and who could forget her ardent support of Patricia Arquette's call for wage equality? Now the beloved actress is at it again, this time targeting every single member of the U.S. Congress.

Streep recently wrote a letter to each individual member of the House and Senate, urging them to revive the Equal Rights Amendment, the Associated Press reported.

"I am writing to ask you to stand up for equality — for your mother, your daughter, your sister, your wife or yourself — by actively supporting the Equal Rights Amendment," the actress wrote. "A whole new generation of women and girls are talking about equality — equal pay, equal protection from sexual assault, equal rights," she added.

While one might assume in 2015 that equal rights are codified into U.S. law, it's not the case. The original Equal Rights Amendment was the brainchild of Alice Paul, who introduced the "Lucretia Mott Amendment" in 1923, which simply stated that "Men and women shall have equal rights throughout the United States and every place subject to its jurisdiction." The ERA remained stagnant until 1972 — after being introduced in every session of Congress until that point — when an effort was led by the decades' most prominent feminists to move the amendment forward in the face of a massive counter-campaign. But even after being passed by the House and Senate, the Amendment fell three states short of being ratified by the required 38 states by the 1982 deadline.

However, a resurgence of support for this amendment has recently emerged. Streep is hardly the only one actively supporting this legislation: Countless activists, politicians and others (including, for example, a group of middle school girls who recently launched a pro-ERA campaign) are working hard to inspire support for this legislation. The visibility Streep brings to this important effort, however, is undeniably invaluable. Hopefully, her letter-writing campaign will pay off and not just inspire politicians to take the ERA seriously, but also rally support for it among her many fans.