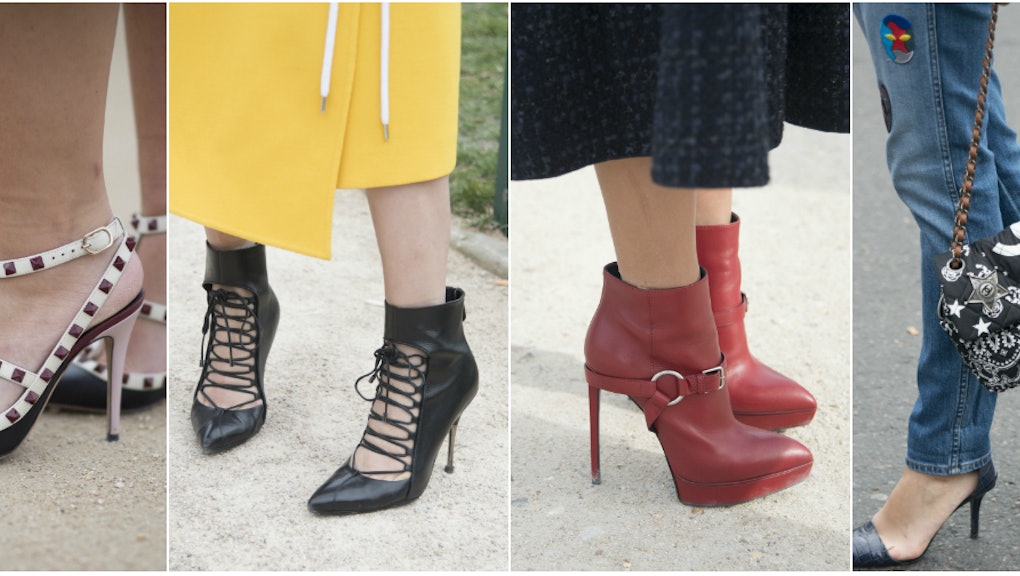 Here Are All the Ways High Heels Are Death Traps, According to Science

If you need medical intervention just to wear an item comfortably, you should know something's up. When it comes to heels, that intervention is the dermal filler injections, known as "Loub treatments," that celebrities and other stiletto-loving people are getting to the balls of their feet so that they can stride more comfortably.

How bad are heels for you? A new study published this month in the International Journal of Clinical Practice highlights the potential of high-heeled shoes to cause ankle injuries and muscle imbalance, among many other health risks.

So why do women wear them? It's more than just vanity at play here. Cultural expectations hold heels aloft as the ideal female footwear. Flats were reportedly a no-no for women on the red carpet at this year's Cannes Film Festival, while airline employees have been striking back against dress code policies that require them to keep their heels on while passengers are boarding, according to the Times of Israel. Similar complaints have been launched at food chains in Canada, where employees are fed up with having to wear heels on the job.

And they have reason to complain: Heels are essentially death traps for the feet, a state we've come to accept as normal when it's most definitely not. For all those who swear by flats and flip-flops, science and medicine can assure you that you're making the right call.

Here's the damage heels wreak on our feet.

We can end up with actual Barbie feet.

Every time you wear heels that are higher than two inches, you risk shortening your Achilles tendon, which is what connects your calf muscles to the back of your heel bone, Dr. Nicole Freels, board-certified podiatrist and owner of Lexington Podiatry in Kentucky, told Mic. Freels recounted a time when she saw a woman whose Achilles tendon had become so shortened, and her foot so permanently arched, that she seemed to hop while walking.

There's a medical term for that foot pain we feel.

We can end up feeling like we're walking with stones in our feet — really.

Pinched nerves, or neuromas, are another common problem associated with wearing heels that don't provide the right kind of support. Constricting your toes can lead to a compression of the nerves between them, David Perelstein, a podiatrist with Buffalo Medical Group, told Mic. It's most likely to occur between the third and fourth toes.

"At times, the patient will describe the pain as similar to having a stone in his or her shoe," according to the American Podiatric Medical Association's website. Dear lord.

Bunions and hammer toes? Heels will only make that worse.

Especially for those predisposed to bunions where the big toe points toward the other toes, Perelstein said, wearing high heels can aggravate the problem and lead to more pain. Bone deformities like bunions or hammer toes are exacerbated with high heels because when your weight is distributed so severely, you end up with a soreness in the tips of the bones, Perelstein said.

According to a study released earlier this year, wearing high heels with more than three and a half inches could also be prematurely aging your knee joints, which can eventually lead to osteoarthritis. For overweight women, the risk is higher because of the immense pressure on the heels.

Even after we've ditched the heels, our feel might still ache.

Instinct might lead you to believe that the more you wear heels the more you'll get used to them, but the pain you feel right away might not go away as soon as you take them off, according to NPR. The story cites a British study that found women who wore heels daily for years developed "shorter calf muscles and stiffer, thicker Achilles tendons," making it harder to stretch and relieve the pain.

Our backs starts to tighten in a not-so-pleasant way.

When wearing heels, your calves pop out more and your back shifts backward to balance out your body weight, Freels said. It's what creates that appealing illusion of an arched body — but too much of a good thing can be bad. All of that weight redistribution can develop into chronic back pain because the muscles are too tight, Freels said.

Oh, and don't forget: We can literally fall off them.

If you're a fan of stilettos, you're also probably familiar with how your body shifts from left to right as you try to balance yourself while walking. If done correctly, it can result the kind of sultry sashaying that's often glamorized in Hollywood... or it can simply lead to hobbling along, and even occasionally falling.

That sort of body weight imbalance can lead to lateral ankle strains, Freels said. And, it's not necessarily the heel height that's to blame, she added — It's often the thinness of the heel that destabilizes us. A recent study published in the Journal of Foot and Ankle Surgery found that heel-related injuries for women in the United States jumped from 7,097 in 2002 to a whopping 14,140 in 2014,  reported Vogue UK.

But all this doesn't mean heels are off the table (er, shoe rack).

"Just be smart about it. A lot of the choices are obvious," Freels said. "Who in their right mind would think, I'm going to wear a high heel all day and nothing is going to happen?"

Freels said if you're walking 30 feet from dinner to the car, there's no need to worry about the negative health consequences. Put simply, she said, "Just don't live in them."

Don't need to tell us twice.