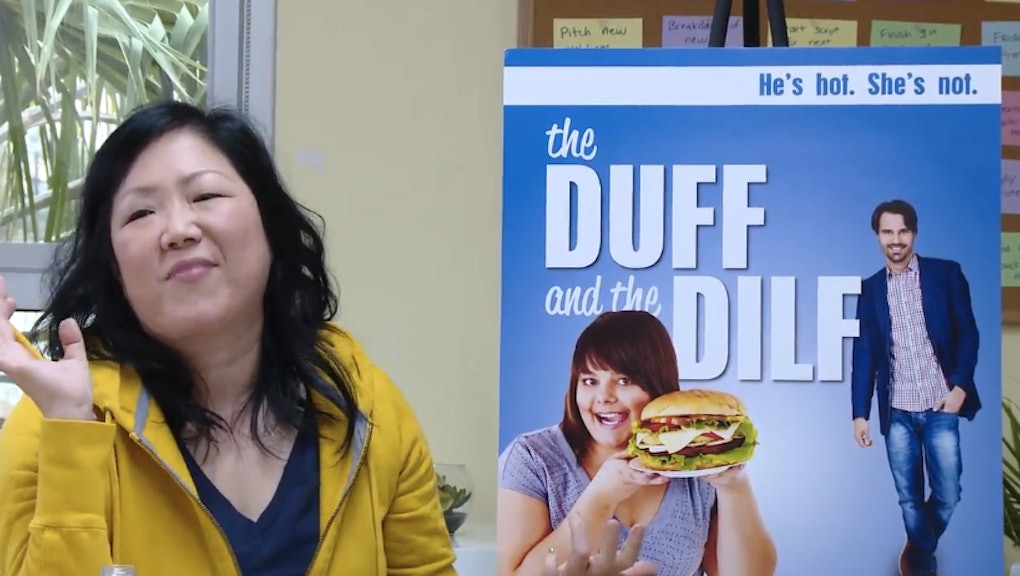 Comedian Margaret Cho is not known for being quiet about the sexism she's faced in the entertainment industry. But now she's putting her words to (hilarious) action in a new Funny or Die video, imaging exactly what Hollywood would look like if women were in charge.

In this alternate reality, Cho leads an all-female writers room for a show titled The DUFF and the DILF  — a clear parody of the notorious real life trope of conventional looking male protagonists paired with exceptionally attractive wives. But the writers have a problem.

Every female trope ever: "Fifty-two percent of our audience is male — or whatever," Cho says, to eye-rolls. "They want us to beef up Dan's character," she adds, then invites her team to brainstorm character improvements, like giving him "a little hobby."

"See that could be funny because everybody knows men aren't funny," she says — echoing similar sentiments made by male comedians about their female counterparts.

"What if Dan has, like, a hot guy friend," another writer proposes. When Cho asks if the men would actually talk to each other — which far too few female characters in mainstream television and films do — the writer responds, "No, no it's just like he has a hot guy friend."

"What if he's, like, struggling all day with blue balls," the same writer suggests later. "So he's just real sensitive like all day," she explains, her idea seemingly similar to the ever-adorable PMS trope.

And the suggestions keep pouring in — from objectifying Dan in a swimsuit, to having him face sexual violence ("Let's just go full Game of Thrones"). But none of these will achieve their goal of making Dan seem like a "human man," according to Cho. When her writers protest that humanizing a male character is "impossible," Cho calls out the single man in the room: Barry.

Barry — who continuously apologizes and notes he only makes 73 cents on his female counterparts' dollar — says he doesn't know how to fix Dan without overhauling the show.

"Barry, you are pretty smart for a diversity hire," Cho notes. "And it wouldn't kill you to smile," she adds, after completely ignoring his advice.

But seriously, folks: While Cho's interpretation of a gender-reversal of the typical male-dominated writer's room is funny, the reality it parodies isn't. Women currently only represent 27% of creators, writers, producers, executive producers, photography directors and editors of prime-time TV shows, according to a 2015 Women's Media Center report. And of course, while Cho and her cohorts poke fun at things like objectification, double standards, and insulting sexist tropes, they're an all-too-accurate reflection of the way women are depicted in mainstream media.

Hopefully Cho's parody will encourage this male-dominated industry to change. But until then, at least we can laugh (if only to keep from crying).