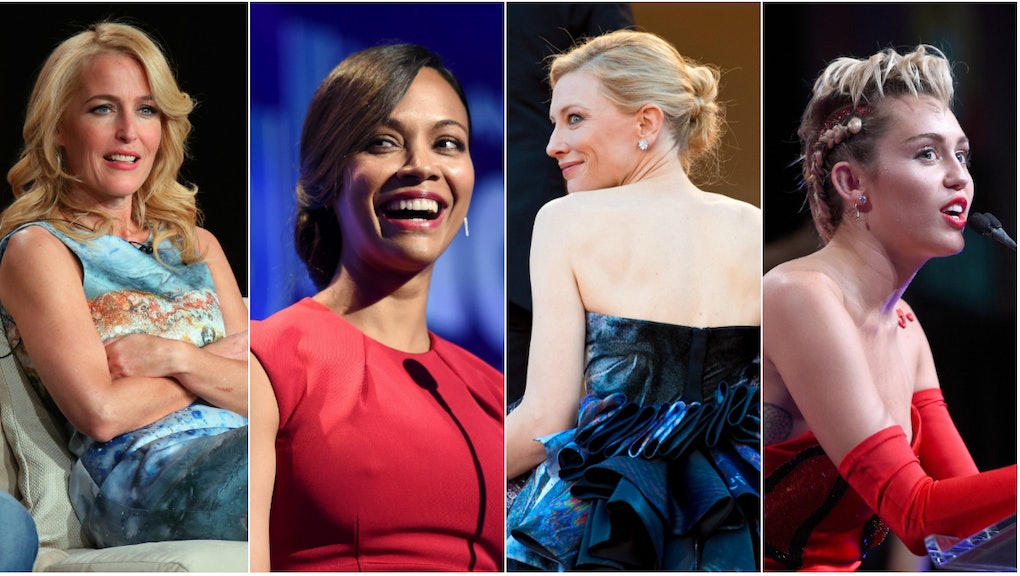 "The world is not to be divided into sheep and goats," the famous sex researcher Alfred Kinsey famously wrote about the spectrum of human sexuality. "The living world is a continuum in each and every one of its aspects."

In other words, sexual fluidity.

Sixty-seven year later, we're more in tune with that fluidity than ever — and have more real-life examples. In her recent interview with Paper, Miley Cyrus declared her sexual preferences in no uncertain terms: "Everything that's legal, I'm down with. Yo, I'm down with any adult — anyone over the age of 18 who is down to love me."

That fluidity is more common among women than men. As Lisa Diamond wrote in Sexual Fluidity: Understanding Women's Love and Desire, for women, "orientations do not provide the last word on their sexual attractions and experiences." Instead, attraction is situational and prone to change. Sure enough, a 2014 study by Indiana University found that although only 7% of women in the United States identify as gay, lesbian, or bisexual, 12% had enjoyed a same-sex hookup at least once in their life (the most common age bracket for these women being 25 to 29 years of age).

And there are plenty of famous women showing them how it's done. As labels slowly become a thing of the past and people re-examine their options for sex and love, here are 11 inspiring responses from women who said that labels are for the birds.

1. St. Vincent: "I think you can fall in love with anybody."

When Annie Clark, aka the singer St. Vincent, was asked by Rolling Stone in 2014 about her sexuality, she got straight to the point. Not only did she say that she doesn't think about the words gay or straight, but that we get "handed these ideas of gender and sexuality." We're given labels, but that doesn't mean we have to use them.

Maria Bello first addressed her label-free relationship in 2013 in her New York Times Modern Love essay, "Coming Out as a Modern Family," and her new book takes on the idea of conventional labels head on. In Whatever... Love Is Love, Bello emphasizes that while her current relationship is with a woman, and her past relationships were with men, sexuality is complicated and there's no need to draw black or white conclusions. It just is.

3. Miley Cyrus: "I am literally open to every single thing."

For all her WTF antics, Miley Cyrus makes positive headlines when it comes to matters of sexuality and sexual orientation. Not only does she work tirelessly as an advocate for the LGBT community, but, as she revealed in an interview for Paper, she practices the kind of acceptance she preaches. She doesn't relate to being a boy or a girl, and her partner shouldn't have to either.

4. Cara Delevinge: "I don't want to pretend to be something I'm not."

Ever since she was seen canoodling, as tabloids love to put it, with actress Michelle Rodriguez, Cara Delevingne's sexuality has been a topic of conversation. Now in a relationship with Annie Clark and clearly in love, Delevingne also admits that she's still sexually attracted to men — there's no reason, she told the Telegraph, to stake a claim to a specific identity that doesn't feel right.

5. Ruby Rose: "Who are we to tell other people how to live their lives?"

Everyone's favorite new Orange Is the New Black star Ruby Rose eschews gender labels ("For a long time, I wished I'd been born a boy. I didn't know there were options like gender neutral or gender fluid," she told Cosmopolitan) and also takes a fluid approach to sexuality. Responding to the whole Internet "going gay" for her, Rose told Elle: Call it going gay, call it whatever. The words we choose are ours, and we have no business telling anyone which ones are right for them.

The indie singer answered a question about her sexuality rather plainly in a 2008 interview, reiterating that it's not being a certain category — it's just about being, whatever that may mean.

7. Gillian Anderson: "I knew that for me it wasn't the only way."

In speaking to the Sunday Times Magazine in 2012, Gillian Anderson acknowledged she's had relationships with both men and women, and noted how embracing neither label entirely allowed her freedom in her youth, without the pressure to "come out" as one thing or another.

Although Zoe Saldana is currently married to a man, as she told Allure in 2013, she's completely open to possibly having a relationship with woman. Having been with one gender for a long time — or your whole life — doesn't automatically earn you a label. It's always a choice, whether you take it or not.

9. Missy Higgins: "I don't think it's necessary to have to define yourself."

The Australian singer was ahead of the pop culture curve back in 2007 when she told the now-defunct lesbian magazine Cherrie that she was "not-so-straight" and instead embraced fluidity sans labels. She also pointed out that "it's becoming increasingly more acceptable to admit that you're that way." If only she knew how far we'd come in eight years.

10. Taylor Schilling: "It's about a person rather than a gender."

In an interview with SSN Insider, the Orange Is the New Black actress explained her character Piper's relationship with Alex, played by Laura Prepon, as being fairly simple: They connect as people. The fact of their genders is besides the point. A relationship is a relationship.

It was when Cate Blanchett was pushed about her sexual history involving women during a press conference for her new movie, Carol, that the actress immediately shut down the conversation. Because honestly, who really cares?