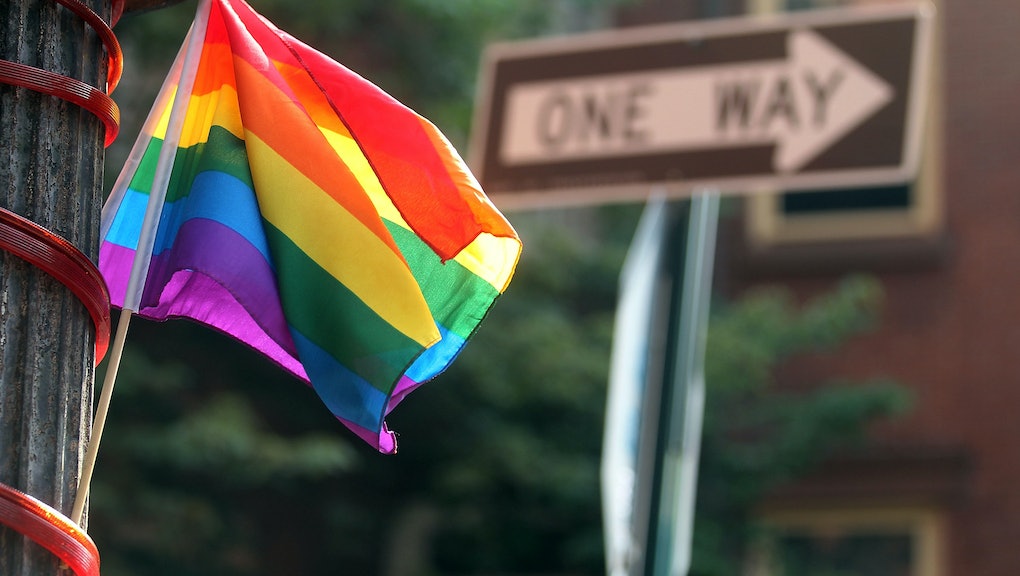 With All Eyes on Marriage, Gays Just Won Another Enormous Legal Victory

The pharmaceutical commercial would practically write itself: A depressed, foppish cartoon protagonist, angry red waves of same-sex attraction emanating from his nether regions, a magic blue pill that makes it all go away.

"Side effects of Homofin might include nausea," a soothing celebrity spokesperson and fellow Same-Sex Attraction Disorder sufferer might intone. With more than 10 million potential patients in the United States alone, it's shocking that the pharmaceutical industry hasn't gotten on board with a "cure" for homosexuality. Where are the SSAD awareness ribbon car magnets, the Fun Runs to Cure Homosexuality, the radio commercials encouraging you to "ask your doctor about Queerocil"?

Big Pharma isn't willing to treat those "afflicted" with Same-Sex Attraction Disorder — but Big Religion sure is.

That's the crux of a New Jersey court case decision that, through luck, coincidence or fate, comes only hours before the Supreme Court is expected to rule on the constitutionality of same-sex marriage. The matter at hand in Ferguson v. JONAH: whether a so-called "ex-gay" therapy practice defrauded its customers by promising them relief from their SSAD — if they tried hard enough. On Thursday in Jersey City, a seven-person jury returned a unanimous verdict declaring that Jews Offering New Alternatives for Healing committed fraud by promising four young men and their parents that the non-profit could change their sexual orientation from gay to straight. The jury ordered the defendants pay a total of $72,400 in damages to the plaintiffs, as well as legal costs that amount to millions of dollars.

"With marriage equality wrapping up nationally, it's time to ensure that LGBT kids live long enough, healthy enough lives to realize those rights," plaintiff Michael Ferguson told Mic. The verdict is a triumph for every gay man and woman who has ever been told that their sexual orientation was a disease, a disorder or an aberration. While the impending Supreme Court ruling on same-sex marriage has been characterized as the culmination of decades of legal, political and societal progress on the issue of gay rights, the Ferguson case represents a decisive victory on an issue far more elemental to the gay experience in America. The high court's likely affirmation of the constitutional right to marry is a win for hundreds of thousands of gay couples, but Ferguson finally settles the questions at the heart of nearly every debate over gay rights: Is homosexuality a choice? And can it be changed?

"A false product sold with false promises": The closing statements at the end of the four-week trial in Jersey City, New Jersey, crystallized the battle between LGBT Americans and their (ever-shrinking) detractors. At times during his closing statement, plaintiffs' attorney James Bromley, who joined the suit after it was filed by the Southern Poverty Law Center in 2012, seemed almost amused by the abject ridiculousness of JONAH's controversial practices.

"Straight guys don't hang out with other straight guys naked in order to make themselves feel more straight," Bromley scoffed, citing the numerous instances when JONAH and its counselors deemed nudity to be the surefire cure for same-sex attraction. "You're in a communal shower with a hundred men and you're washing mud and cake off of each other?" If this is what turns you straight, Bromley seemed to say, then what in the hell makes you gay?

But Bromley made it clear to the jury that the brutal ramifications of JONAH's practices were no laughing matter. "My clients needed help," he said. "They went to JONAH. JONAH lied. And JONAH made it worse." He deemed the nonprofit's services "the definition of a false product sold with false promises," a grotesque violation of consumer protection laws. Numerous courtroom observers shed tears as Bromley described one activity wherein a plaintiff's childhood sexual abuse was re-enacted in front of him by strangers. "'If you don't give me a blowjob, I won't love you anymore,' his abuser said. Just a few feet away, [the plaintiff] watched that same sexual abuse re-enacted before him, in a process that was designed and enacted by amateurs," Bromley said, visibly angry. "That kind of exercise, for a victim of sexual abuse, is itself sexual abuse."

The final argument for JONAH, meanwhile, was the logical culmination of four weeks of rambling, unfocused defense conducted by Charles LiMandri, an attorney at the forefront of the Proposition 8 battle who styles himself as an expert on the "nationwide conspiracy" of homosexuality. In his three-hour closing statement, LiMandri accused the plaintiffs of being under the "evil influence" of a vast gay conspiracy, utilizing "underhanded sabotage-type tactics" in the service of an agenda set by the "militant gay-rights movement."

"The plaintiffs are flat-out liars!" LiMandri shouted at one point. "Shame on them! After telling everybody how much they loved [Alan Downing, one of JONAH's unlicensed counselors], and how wonderful he is ... to come in and spread these horrible lies about people."

Throughout the trial, however, even LiMandri didn't seem to buy the most extreme tactics used by JONAH and its cohorts (what he called "the nudity stuff"). LiMandri called therapeutic exercises based on nudity "bizarre," "very odd," "extreme," even "ludicrous" practices that "would make Alan Downing look bad under any set of circumstances." In JONAH's eyes, however, the plaintiffs got exactly what they were asking for.

"People have the choice to identify however they want," LiMandri said, "but people also have the right if they're unhappy to seek help."

But people don't have the right to be defrauded. According to JONAH's advertised success rates (which range from one-third to 75%, statistics that the defendants admitted under oath were mostly pulled out of the clear blue sky), the plaintiffs had a chance, however vanishing, of changing their sexual orientation to comport with the heterosexist standards of their highly religious communities. If this were true, JONAH would likely have been in the legal clear; even if JONAH's "success rate" only matched that of the New Jersey State Lottery Pick 6 (odds of winning: roughly 1 in 13,983,816), the organization wouldn't be in violation of the Consumer Fraud Act. But in conversion therapy, there is no success — only different grades of failure.

JONAH even foresaw potential lawsuits over its practices, encouraging clients to sign waivers admitting that the nonprofit's practices were "controversial." But in Bromley's words, "There's no disclaimer that says, 'I don't know what I'm talking about and I'm not qualified to talk about it.'" The diagnosis of Same-Sex Attraction Disorder itself is a fraud, a fictitious diagnosis invented to make gay men and women seem less like human beings and more like a virus. JONAH and its amateur figureheads exploited the deepest beliefs and fears of their clientele to sell their snake oil, preying on members of religious communities with rudimentary understandings of sexuality and mental health as easy marks for their con.

This courtroom triumph over "ex-gay" con artists is monumental for LGBT Americans.

It seems strange that a minority population on the verge of its most public constitutional victory in history is simultaneously fighting for the simple acknowledgment that attraction to the same sex isn't a "disease," but that doesn't make the verdict any less momentous. The Ferguson verdict is a legal, precedent-setting declaration that homosexuality, whatever it is, isn't a "disorder," a "deathstyle," or the result of a "psychological wound," as JONAH's would-be mental health professionals declared in their testimony. While a person's sexuality may change, the jury has declared, it cannot be changed. For a minority forced into a decades-long battle for acknowledgment of its very existence, the symbolic importance of Ferguson v. JONAH to the LGBT community is hard to overstate.

The plaintiffs in the case — Michael Ferguson, Benjy Unger, Sheldon Bruck and Chaim Levin — faced a defense team willing to do anything to protect the people that had defrauded them. Their sexual histories, mental health struggles and family trauma were aired for the entire court as JONAH's defense team scrambled to prove, somehow, that selling homosexuality as a sickness isn't fraud on its very face. They were forced to listen to testimony that declared them incapable of monogamy and doomed to "psychiatric disorders, alcoholism, drug addiction, suicide and bowel disease."

Despite these heinous tactics, (which did a better job exposing the defense team's moral failures than those of the plaintiffs) Ferguson, Unger, Bruck and Levin prevailed. On the eve of a Supreme Court ruling that will likely eclipse their victory on a planetary scale, these four young gay men are celebrating a cause of equal significance — not the hard-won right to marry who they choose, but the ability to say that as a matter of law, being gay is normal, and healthy, and good.