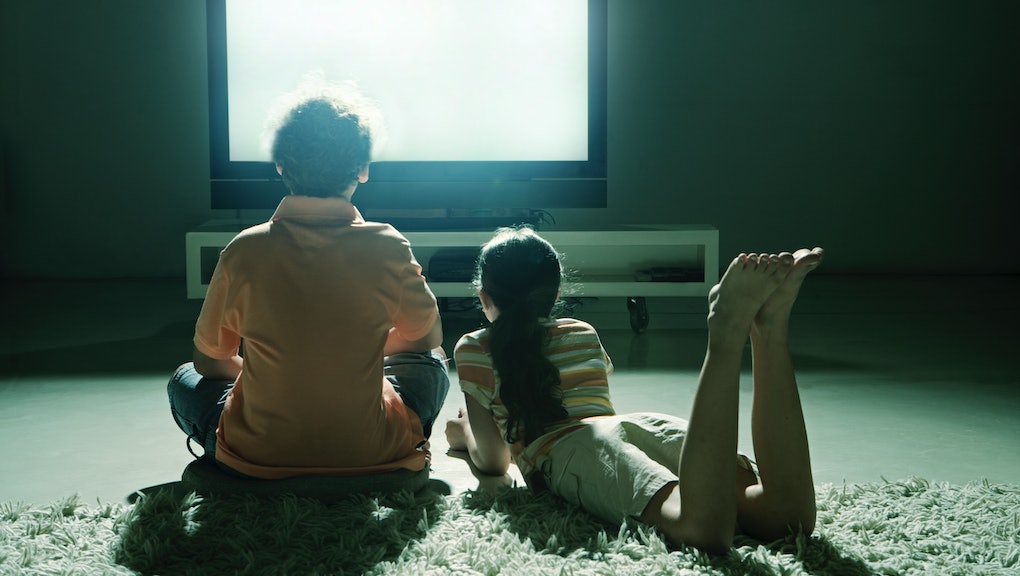 What do Leonardo DiCaprio, our cool childhood next-door neighbor and Google all have in common? They're the ones who taught many of us about s-e-x.

When it comes to the birds and the bees, we grow up piecing together information from a random assortment of sources. Sex education in the United States is woefully insufficient (especially compared to many European countries), and not everyone gets a "talk" from their parents that really does the job. So plenty of today's 20-somethings owe their sex knowledge to the early Internet, library books skimmed furtively under the covers and R-rated movies (hello, Pretty Woman).

Now that we're adults, we can't help but look back on our haphazard sex ed and shake our heads at the simplistic, mortifying, and often hilarious ways we found out how babies are made (and what we didn't learn about until later, like consent or safer sex practices). So Mic asked the Tumblr community to share how they actually learned about sex.

Given this start, it's amazing we ever learned to have good sex at all...

TV and movies gave us our first (inaccurate) taste of what sex looked like.

"If I had to hazard a guess I would say Titanic when I was about 4. For the longest time I thought sex was rolling around naked, like in the movies." ­— dillydallydilettante

"Oh god. When I was 7, I was pretending to be a cat, all stealth-like and crept into the den on my hands and knees only to see my mom and dad watching a movie with ... a man sucking on his wife's toes. And onwards from there. The horror." — cheshirepierrot

"From my mother allowing me to stay up watching episodes of Melrose Place when I was in elementary school." — slyinwonderland

"Exposure from movies as far back as I can remember, but I didn't fully grasp the concept until I was about 10 and used to stay up late just to watch Talk Sex with Sue Johanson. I thank the Oxygen channel for that show!" — deadbeatinawe

"Exposure from infancy and on to Howard Stern's radio show, and other media ... My parents never gave me a sex talk because I guess they didn't know what to say to their AFAB child who went from identifying as a bisexual girl, to a lesbian, to a bisexual (I say that loosely) trans man." — leowithani

Our friends told us about it — which often drove us to the Internet.

"My best friend brought over the Spice Girls CD and had to give me some context to understand '2 Become 1.' We were about 7 or 8. 'The guy puts it WHERE?!' Didn't help that I didn't really understand my female anatomy yet!" — radicalpostbacc

"When I was 12, my boyfriend at that time said something about blow jobs so I searched it up and... HELL NO." — sinkkingg

"That stupid jelly bracelet fad from a decade ago. Friend sent me a link to their meaning once, included a bunch of illustrations and graphic stories. I was in fifth grade, and that was my first experience with 'funny feelings.'" — arctic-hands

"I was 10, and some older kid told me about a site for top secret toys developed by the army. I looked it up, and ... they really were toys for privates." — creativelybored

But some of them didn't really know what sex was, either.

"My daycare friend was four years older than me (I was 7) and she told me not to lay down and kiss a boy because then you'll have a baby. So I Googled it... needless to say... I learned." — lonabona

Accidentally witnessing it was pretty much the worst.

"At about age 6 I quietly walked in on my parents while they were having sex, and walked right back out unseen. ... I hid out in my bedroom after, very confused and not a little weirded out by whatever the heck they'd been doing ... At age 8, a schoolmate 'explained' sex, and I told my parents what she'd said that night at dinner. ... Whatever my friend had told me was waaaaaaay off base, so my parents had to correct the errors with good information." — highwaydiamonds

"I was 6 and saw two burly men fucking wildly in a park and called 911 because I thought they were fighting." — afueras

Doing our own research was effective, but a little traumatizing.

"When I was around 5 years old, I read a book called How Life Begins that I found in my school library. I don't think the nuns were aware of how detailed the explanations were and how much the pretty pictures would appeal to a 5-year-old." — alwayzefree

"I looked up 'How does sex work' on my Nintendo DSi in the middle of the night." — gramsung

"I learned from a book that was made around the 1970s and explained puberty and sex. I was about 10 years old and was curious because I had no idea what a penis looked like." — makingwishesoffofairplanes

"When I was in my preteens I found my parents' sex books with different positions for a healthy sex life or something and would look at those when no one was home." — viitsima

Thank goodness some of us were lucky enough to get "the talk" ...

"My parents sat me down and told me the mechanics. I was 8 and I didn't realize it was fun. I thought you went in the bathroom and 'did it' real quick when you wanted to have a baby." — vonpitsu

"My mother educated me really early! She forced us to watch a video explaining the science behind it and what it was, and always encouraged questions." — disneygeek626

"The very first time I heard about sex was when I was 2, and my mom was pregnant with my sister. My mom has always been pretty open about sex, so although she didn't really talk about the pleasure aspect, I knew it had to do with a man and a woman in bed, and that it was for making babies ... She figured if she just told us, we wouldn't go snooping and find things that were less age-appropriate." — allstrangeandwonderful

"My mother was a pediatrician so I learned about sex matter-of-fact, anatomically and what biological purpose it served. She was still, however, of the mind that I wouldn't have sex before marriage (that did not happen)." — ahodgepodgery