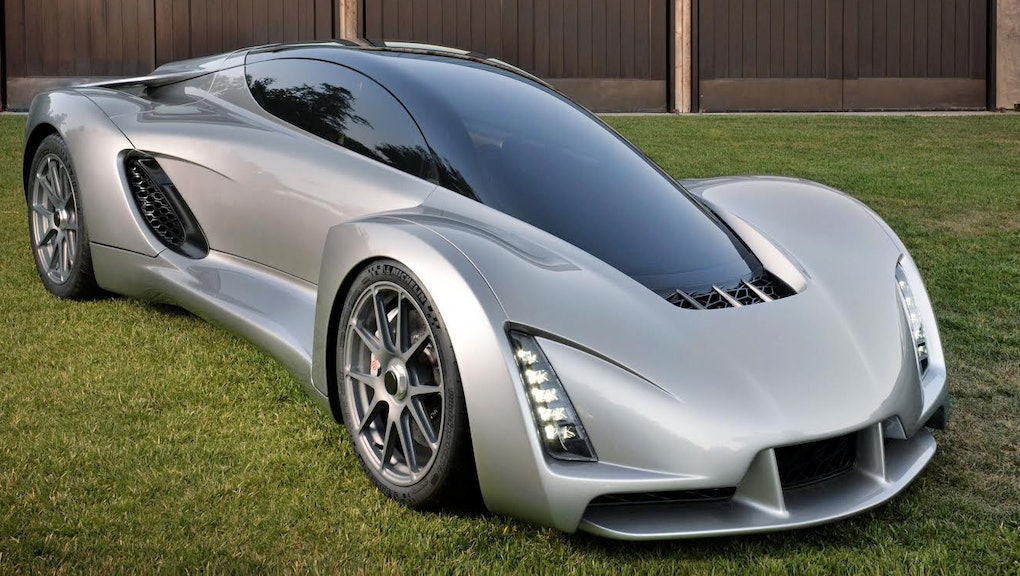 On Wednesday, a San Francisco-based startup unveiled a 700-horsepower supercar that weighs only 1,400 pounds — less than half the weight of a 2015 Chevrolet Corvette.

It's called the Blade. It has just one third of the emissions of an electric car, putting hybrids like the Prius to shame. And it can go from 0 to 60 in 2.2 seconds.

Divergent Microfactories CEO Kevin Czinger wanted to challenge how we approach the automotive industry, which is already responsible for an astounding amount of the planet's environmental damage.

"Society has made great strides in its awareness and adoption of cleaner and greener cars," Czinger said, according to 3DPrint. "The problem is that while these cars do now exist, the actual manufacturing of them is anything but environmentally friendly ... we've found a way to make automobiles that holds the promise of radically reducing the resource use and pollution generated by manufacturing."

To keep cost and weight down, the bones of the car aren't a single piece but a network of carbon-fiber tubes connected by 3-D printed aluminum "node" joints. Since the parts are small, the printing process and the printer itself don't need to be car-sized like it would be if Divergent tried to print the whole chassis as a single piece.

The Blade is basically a race car: It has two seats, a front and a back, with gull-wing doors and a powerful four-cylinder engine (you don't need much to make 1,400 pounds of aluminum and carbon fiber go fast).

The safety of a pieced-together chassis or the efficacy of a fully printed auto body obviously still remain to be seen, and it will probably be a while before we see Czinger's creation storming the interstates of California. But these cost-effective cars could drastically reduce the impact automobiles have on the environment. Plus, Czinger says, there's no reason the same chassis concept couldn't be applied to your typical soccer van or work truck.

Then again, it would be harder to get people excited about a 3-D printed commuter car when we can drool over the Blade — something Tony Stark or James Bond might drive.