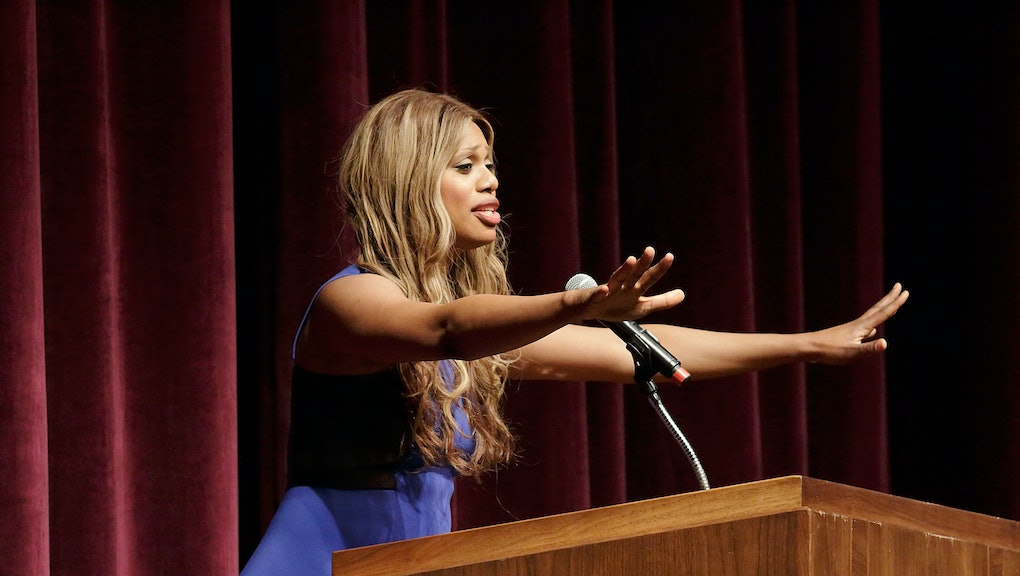 When It Comes to Trans Issues, There's a Conversation We Need to Be Having

The movement for trans equality is more visible than ever before, with Caitlyn Jenner tweeting to an audience of 2.6 million followers, Laverne Cox on the cover of Time with the headline "The Transgender Tipping Point" and trans activists raising their voices online and even in the White House.

But even as more trans issues come to the fore, there's still a facet of the trans experience that remains largely in the shadows, a universal human challenge that trans individuals may struggle with more than most:

While overall trans acceptance increases, dating while trans still involves swimming against the tide in a sea of stigmatization, unwanted fetishization and other people's hang-ups.

While there isn't one dominant trans narrative, and many trans individuals aren't yet even able to date traditionally in the first place, one thing is clear: Living in a world where trans people are treated as equals centers on tearing down stigmas against trans people — and stigmas against those who date them.

When stigmas are internalized: In a recent interview on SiriusXM Progress, Laverne Cox dropped a truth bomb about men who date trans women. "As I date a lot of straight-identified men, I've seen them so deeply internalize these ideas very rigidly about what it means to be a man — to be a straight man," she told interviewer Michelangelo Signorile.

An essay written by one man in Salon in 2013 suggests that Cox's statements are all too accurate. "The heteronormative world in which we live had successfully convinced me that being attracted to transgender women meant I had a fetish," wrote Thomas Matt. "I began questioning my sexuality and even my masculinity."

Adding to the problem of those internalized assumptions is the fetishization of trans bodies, including the phenomenon of "chasers" (trans "admirers" who effectively harass trans people on the dating scene), Christin Scarlett Milloy explained in Slate. A Tumblr called "Trans Men on Grindr" is one of many examples that display the disturbing practice in action, with comments from cis gay men to trans gay men like, "I'm super curious about your privates!"

The danger of "disclosing": Such misconceptions about trans people can make the act of "disclosure" a particularly risky one. Sometimes reactions can turn violent (according to a 2011 report, people who identify as trans are 1.58 times more likely to experience injuries from hate violence than the rest of the LGBT community, and "trans panic" — used as an excuse for committing an anti-trans crime — is only banned as a defense in one U.S. state).

But even without violence, the moment of disclosure can turn into a deal-breaker. "I've experienced a variety of really creative blow-offs when women discovered I was trans," Dana Beyer, a transgender rights activist who dates cis lesbians, told Mic. "You end up with a real problem of stigma in even considering the possibility of intimacy."

Self-identified trans-masculine vlogger Jeff Miller told viewers in March that responses from potential partners range anywhere from the vaguely insulting ("I feel like I shouldn't be attracted to you, but I am") to the weakly resigned ("This would be much easier if you weren't trans").

Meanwhile, YouTuber Princess Joules finds straight men are quick to question their sexuality when she tells them she's trans. To which she says, "Obviously, you're not gay — do I look like a man to you?"

When partners are stigmatized, too: Even when cisgender daters overcome those judgments and insecurities, an important stumbling block remains. "Most men who are attracted to and date transgender women are probably stigmatized even more than trans women are," Cox told SiriusXM Progress.

That stigmatization is evident in the few instances of celebrities whose transgender relationships have been aired out by a voracious media. The media treatment of "the transsexual" who allegedly slept with NFL star Hank Baskett, or Michael Phelps' girlfriend who "was born a man," reeked of shame, disgust and judgment, inviting readers to gawk at Baskett and Phelps as either fools or oddities.

Cisgender daters may also simply fear for the relationship as a whole. "At first, I didn't want to tell anyone," Marisa Carroll, a straight cis woman wrote for Marie Claire after falling in love with a trans man, now her husband. "Would his trans identity be met with invasive questions?"

That fear, as well as the fear of being personally judged, can lead cis daters to hide their relationships.

Trans vlogger Miss Ericka Kane's experiences confirm this reality. "Dating is already a hard thing to do in society as it is," she said in an email to Mic. "But being trans makes it ten times worse because you're being shamed for who you are."

However, she also noted that there's hope. For the past four years, she has been with a man willing to stand for their relationship because he loves her for the person that she is. "I want to tell the trans girls and guys out there that true love does exist," she said. "Never give up hope on love because it may be right around the corner."

During her speech at the 2014 Creating Change conference, Laverne Cox told the audience, "Loving trans people, I believe, is a revolutionary act."

Indeed it is. Hopefully some day, it won't have to be.