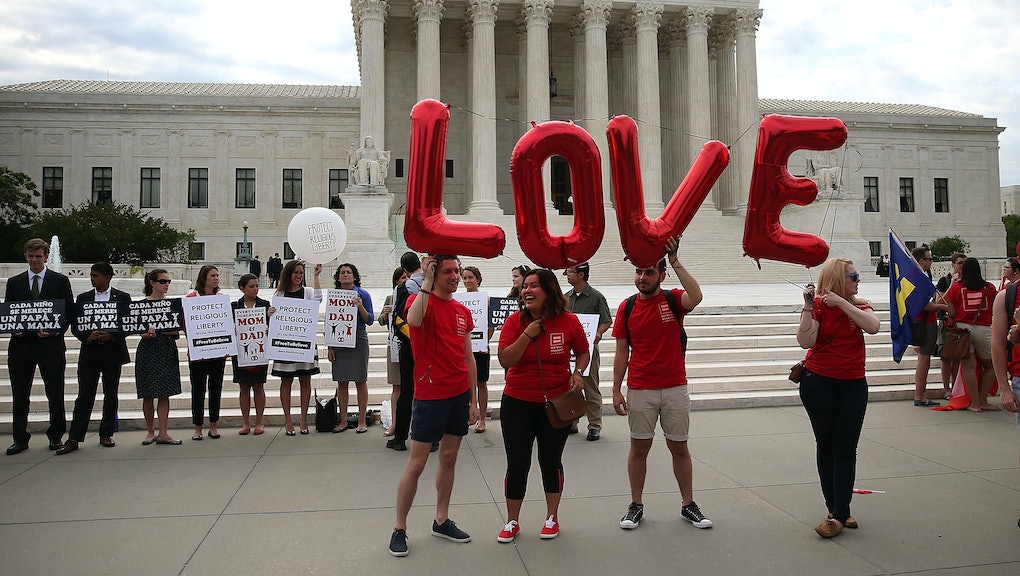 "In forming a marital union, two people become something greater than once they were," Justice Anthony Kennedy wrote in the opinion of the court. "It would misunderstand these men and women to say they disrespect the idea of marriage. ... Their hope is not to be condemned to live in loneliness, excluded from one of civilization's oldest institutions. They ask for equal dignity in the eyes of the law. The Constitution grants them that right."

While a major victory for same-sex rights in and of itself, the decision also underscores how quickly the ground has shifted on the issue, in both the court and the court of public opinion. In just 20 years, the United States went from a country with no legal recognition of same-sex marriage to one where marriage equality will now be the norm from sea to shining sea.

The last two decades can be neatly summed up in the following GIF:

The court took the case after the U.S. Court of Appeals for the Sixth Circuit ruled in favor of state marriage bans, which previously broke a long string of victories for same-sex marriage in various states around the country. In Obergefell v. Hodges, the court had to determine two points: whether the 14th Amendment requires states to issue marriage licenses to same-sex couples, and whether states must recognize same-sex marriages performed in other states.

Even before Massachusetts got the ball rolling by becoming the first state to legalize marriage equality in 2004, the GIF shows how a number of states instituted statutory bans and even state constitutional prohibitions as a precautionary measure. For several years after that, marriage equality was largely confined to liberal New England and Iowa, where it was authorized by a unanimous ruling by the state's historically progressive Supreme Court.

While today a majority of Americans now favor extending marriage equality across the country, it was only in 2004 that former President George W. Bush rode to re-election on a campaign that promised a constitutional amendment banning same-sex marriage. While the federal amendment ultimately failed, the election gave Bush a second term by driving turnout with 11 similar bans approved by voters at the state level.

The settling of marriage equality once and for all falls far short of ending LGBT discrimination in the United States. Employers in more than half of U.S. states are still be able to legally fire newly married employees for no other offense than loving someone of the same sex. Transgender Americans, who have long existed in the shadow of their LGB comrades, are only just beginning to emerge and demand a comparable level of societal acceptance. Marriage equality can now be checked off the list, but there are still many more miles to go.