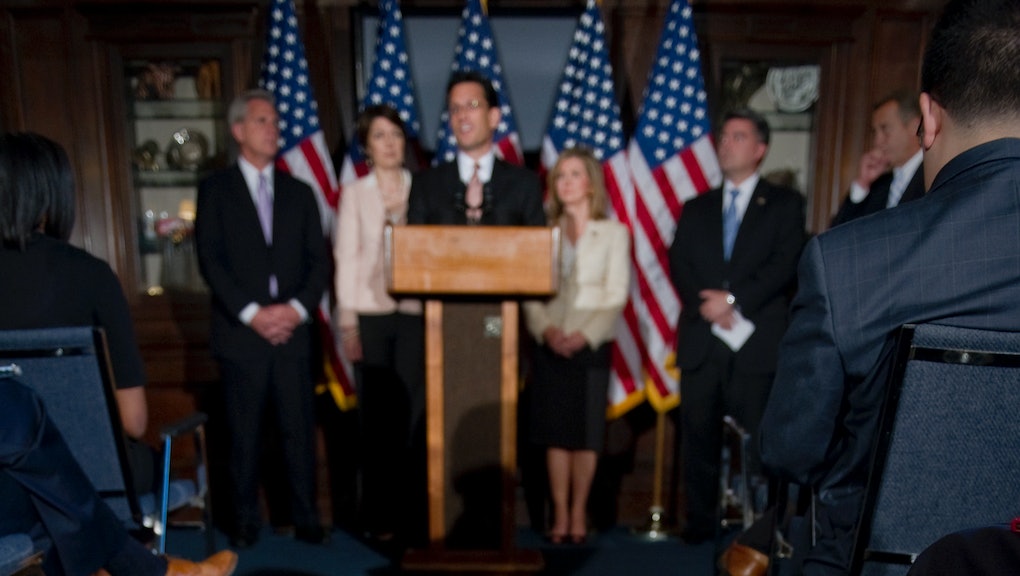 On Thursday, the Supreme Court ruled in favor of the Obama administration in the case of King v. Burwell, a controversial lawsuit cooked up by right-wing activists that would have eliminated crucial health insurance subsidies for upwards of 6 million Americans.

President Barack Obama delivered remarks later in the morning celebrating the decision, pointing out the benefits that millions of Americans now enjoy from expanded health coverage under the Affordable Care Act.

But Republicans also have reason to see the decision as a victory. Had the Supreme Court ruled in favor of the challengers, the GOP would have been responsible for millions of Americans — most of whom live in Republican congressional districts — losing access to health care. Given that they lack a coherent or viable alternative to Obamacare, Republican lawmakers and presidential candidates dodged a bullet.

While many of them undoubtedly breathed a sigh of relief in private, the Supreme Court's decision has nonetheless allowed Republicans to maintain their nihilistic crusade against health reform unabated.

Here's what the Republicans running for the White House are saying about the Supreme Court decision:

Former Florida Gov. Jeb Bush put out a statement expressing extreme disappointment with the decision, and vowed to continue the "fight against Obamacare":

"I am disappointed by today's Supreme Court ruling in the King v. Burwell case. But this decision is not the end of the fight against Obamacare.

Sen. Marco Rubio of Florida unleashed a long tweetstorm after the ruling came down:

On Facebook, Fiorina said, "The lasting solution here is what we've been saying all along. We need to repeal Obamacare."

In a statement, Kentucky Sen. Rand Paul said, "Obamacare raises taxes, harms patients and doctors, and is the wrong fix for America's health care system. As president, I would make it my mission to repeal it, and propose real solutions for our health care system."

Texas Sen. Ted Cruz wins for the best line in any of the candidates' responses, calling the justices "robed Houdinis" who "transmogrified" the meaning of a federal exchange:

"Today's decision in King v. Burwell is judicial activism, plain and simple. For the second time in just a few years, a handful of unelected judges has rewritten the text of Obamacare in order to impose this failed law on millions of Americans. The first time, the court ignored federal law and magically transformed a statutory 'penalty' into a 'tax.' Today, these robed Houdinis transmogrified a 'federal exchange' into an exchange 'established by the state.'

South Carolina Sen. Lindsey Graham emphasized that he would repeal and replace Obamacare:

"This case was brought before the Supreme Court because President Obama and his Democratic allies in Congress rammed through their hastily and deeply flawed legislation to create Obamacare, apparently without even proofreading their own bill. The result has been a disaster from Day One. Today's decision only reinforces why we need a president who will bring about real reform that repeals Obamacare and replaces it with a plan that expands consumer choice, increases coverage, delivers better value for the dollar and gives states more control, without stifling job creation. As president, this is the kind of reform I would put in place."

Former Pennsylvania Sen. Rick Santorum took the opportunity to highlight his conservative credentials, and slipped in a random hashtag:

The other Rick in the race, the former governor of Texas, said on his website, "[T]oday's ruling allows [the Obama administration] to continue to disregard the letter of the law."

"President Obama would like this to be the end of the debate on Obamacare, but it isn't. The debate will continue because the law has failed to accomplish its prime objective: containing health care costs.

Dr. Ben Carson, who made his political name by railing against Obamacare, took to Twitter to share his reaction:

For those keeping score at home, that's exactly zero Republican candidates who have departed from the "repeal Obamacare" line.