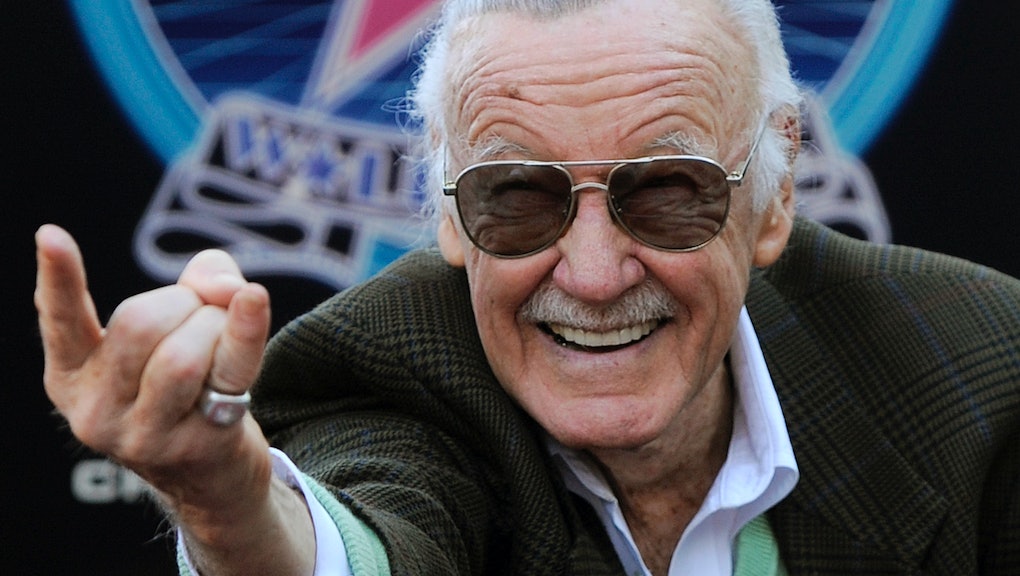 Stan Lee Has Doubled Down on Spider-Man's Whiteness

Last week, Gawker published excerpts from a contract between Sony Pictures and Marvel that said Peter Parker — the fictional, spider-like mutant commonly known as Spider-Man — must be white and heterosexual when depicted on film.

Now, Stan Lee has weighed in on the topic. In an interview published June 22, Newsarama asked the web-slinging cash cow's creator what he thought about the agreement.

Lee's answer? "But we originally made him white. I don't see any reason to change that."

Sigh. Changing the racial backgrounds of well-known superheroes has been a fraught topic for years. The persistent noncontroversy has materialized recently in the debate around Michael B. Jordan, the black actor cast as Johnny Storm, aka The Human Torch, in the Fantastic Four film reboot.

Jordan's response to his detractors was captured on video at the time: "They're still going to go see it anyway."

Lee himself reportedly endorsed Johnson being cast. So far, the world has not imploded, and Jordan is still getting paid with a capital "P."

In Spider-Man's case, this discussion came up when Andrew Garfield, a white man, was cast to play Parker in the Amazing Spider-Man films in 2010. Fans at the time clamored for a nonwhite iteration of the character. Donald Glover was floated as an option and the hashtag #donald4spiderman even trended on Twitter.

Even though studies have shown a direct correlation between diversity in casting and high box office profit margins of late, nonwhite incarnations of Spider-Man have still only appeared in the comics and cartoons — most notably Miles Morales, whom Marvel recently introduced as the new, long-term face of the hero in print.

Of course, nothing good ever lasts: Tom Holland, who is white, was cast as Parker in the new upcoming film version shortly after the Morales announcement, in apparent deference to Sony and Marvel's contract obligations.

For his part, Lee has insisted his stance on the issue has "nothing to do with bigotry," according to the Guardian. "It has nothing to do with being anti-gay, or anti-black, or anti-Latino or anything like that," he told Newsarama. "I just see no reason to change that which has already been established when it's so easy to add new characters. I say create new characters the way you want to. Hell, I'll do it myself."

Out of context, perhaps it's a fair point. But the problem with the whole "leave things how they've always been" logic ignores an insidious truth about racism and homophobia: They are, in fact, how things have always been.

Sure, Spider-Man was white and heterosexual at the time of his creation. But his creator was a white man working in commercial comics in America in the early 1960s. Was there ever really a chance he could've turned out any different?