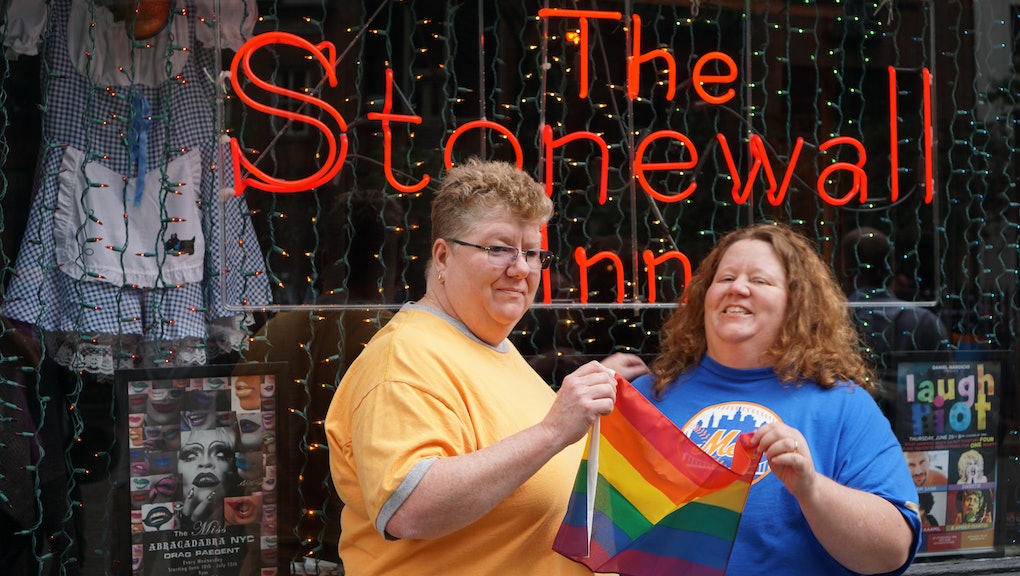 At the Birthplace of the LGBT Rights Movement, Hundreds Gather in Celebration

New York City — In 1969, the Stonewall Inn was the site of the birth of the modern LGBT rights movement. Today, almost exactly 46 years later, the Greenwich Village landmark was the site of a spontaneous gathering of hundreds of gay, lesbian, bisexual and transgender people from around the world, who were celebrating that movement's greatest legal achievement in history: a Supreme Court ruling that the 14th Amendment of the U.S. Constitution protects their right to marry.

A crowd began to gather in front of the bar almost two hours before the Supreme Court decision in Obergefell v. Hodges was handed down, with high hopes and high anxiety.

"I'm excited! Nervous, but excited," Kenneth Dowling, a rising Ph.D. student from Washington, D.C., told Mic. "I hope they do it today so we can celebrate Pride in an extra-special way."

"We just held each other and we cried": Once the decision was known — a reporter checking SCOTUSblog on their phone made the announcement — the growing group's anxiety broke into the kind of joyous pandemonium seldom seen on the streets of New York City.

"We just heard people cheer — love wins!" Colleen McCollum, standing next to her wife Shellie Cross, told Mic. "It means that the marriage that we celebrated on Feb. 28 of this year is now legal everywhere."

"We held each other and we cried," said Cross. "So much from our community went into today, went into this moment. We wanted to be here by the Stonewall Inn, where it started, just to pay homage to our friends and our family members who couldn't be here today because they're no longer with us."

For the couple, who married four months ago but have been together for more than 12 years, marriage equality is an issue of respect for same-sex couples, no matter where they happen to live. "I'm actually originally from West Virginia," said Cross. "I'm just happy that I can go home and that it's the same in New York, New Jersey, West Virginia, Connecticut — anywhere! It's wonderful."

The celebration drew the old guard of LGBT activists who had fought for decades to see same-sex marriage become a reality, but also young people who couldn't imagine a world where their gay friends didn't have the same rights that they did.

A large group of Texan high school students crowded at the edge of Sheridan Square said their presence on the day of the Supreme Court decision was a coincidence. "We just got sent here on assignment for the morning!" said one student. "We had no idea we were gonna be here for history."

The teens, part of a theater group from Austin, couldn't believe their luck. "It's great to think that we're gonna be able to tell our kids one day that we were here the day that the Supreme Court made it unconstitutional for states to ban same-sex marriage."

"A lot of us learned about it this year in U.S. History," said another student, pointing at the Stonewall Inn.

The heart of the gay liberation movement: The Stonewall Inn became synonymous with LGBT rights in the early hours of June 28, 1969, when eight police officers entered the mob-run gay bar on Christopher Street in Manhattan's Greenwich Village, one of the great "gay ghettos" of the time, with shouts of "Police! We're taking the place!"

At previous raids, the police had typically only arrested bar patrons without identification, as well as transvestites, Stonewall employees and men who had been dancing with one of the two undercover officers masquerading as fellow Stonewall patrons (an entrapment technique known in the NYPD as "capture the fag"). After a payoff from the mafia, the bar would be open for business again in a few days.

This raid, however, did not go so smoothly. The police decided to take everyone present to the police station without an adequate number of patrol wagons to transport them, leaving the officers surrounded by nearly 200 "suspects" and a growing number of agitated Greenwich Village spectators. As the first patrol wagon arrived, the tense situation continued to escalate. A bystander shouted, "Gay power!," a small group began singing "We Shall Overcome," and, when an officer shoved a drag queen, the tension finally broke. The drag queen hit the officer with her purse, and others in the crowd began throwing coins, beer bottles and bricks at the patrol car, screaming "Nobody's gonna fuck with us!" and "Ain't gonna take this shit!"

The unrest exploded as the crowd, attempting to release an arrested lesbian, rocked a patrol car almost to the point of tipping it over, and one drag queen bashed a policeman in the face with her heel and stole his handcuff keys. The resulting riots continued for three days and were reported in the New York Times, the New York Post and the New York Daily News, which carried it on page one with the title "Homo Nest Raided; Queen Bees Are Stinging Mad." Bars had been raided for decades and gays were routinely harassed and arrested for minor infractions; for some reason, however, this raid was different.

Michael Fader, one of the rioters, crystallized the reasoning behind the crowd's actions in Martin Bauml Duberman's Stonewall:

"We all had a collective feeling like we'd had enough of this kind of shit. It wasn't anything tangible anybody said to anyone else, it was just kind of like everything over the years had come to a head on that one particular night in the one particular place, and it was not an organized demonstration. ... Everyone in the crowd felt that we were never going to go back. It was like the last straw. It was time to reclaim something that had always been taken from us ... There was something in the air, freedom a long time overdue, and we're going to fight for it. It took different forms, but the bottom line was, we weren't going to go away. And we didn't."

The riots kickstarted the movement that lead to this moment. To this day, the LGBT community around the globe commemorates the Stonewall Riots, as they came to be known, with protest marches, Pride parades and, recently, with celebrations of momentous legal victories.

For some, the Stonewall Inn still represents that first push for recognition of LGBT Americans as human beings. "For me, it means a place in which people first stood up against injustice," said Lira Finkbeiner, who hopes to celebrate the victory with her fiancée.

But the fight isn't over. Many revelers noted the importance of celebrating this moment in LGBT history, while not forgetting the challenges the community still faces. "Hopefully [this decision means] the ability to turn on to other issues facing the LGBT community," said Boessenecker.

"The next significant thing the LGBT community should focus on is trans issues," said Havern, who also cited the fight against LGBT homelessness as an important cause. "Forty percent of homeless youth are LGBT!"

"The fight for rights is not over," said Jaime Santana, who, with his friends Paul Grajalas and Luis Cointi, traveled from Puerto Rico to march in this year's Pride parade. "There are so many other rights we have to fight for. People may think, 'Okay, now it's over, we don't have to fight anymore.' Yes they do!"

"We're really excited to be here and be part of history, to know that the next generation will have the opportunity to be more free," said Grajalas, but agreed that there's still more work to do. "We still have more fights. This is a big step, but we have more coming!"

"We need to celebrate!" shouted Santana in triumph. "But we can't stop fighting for our rights."