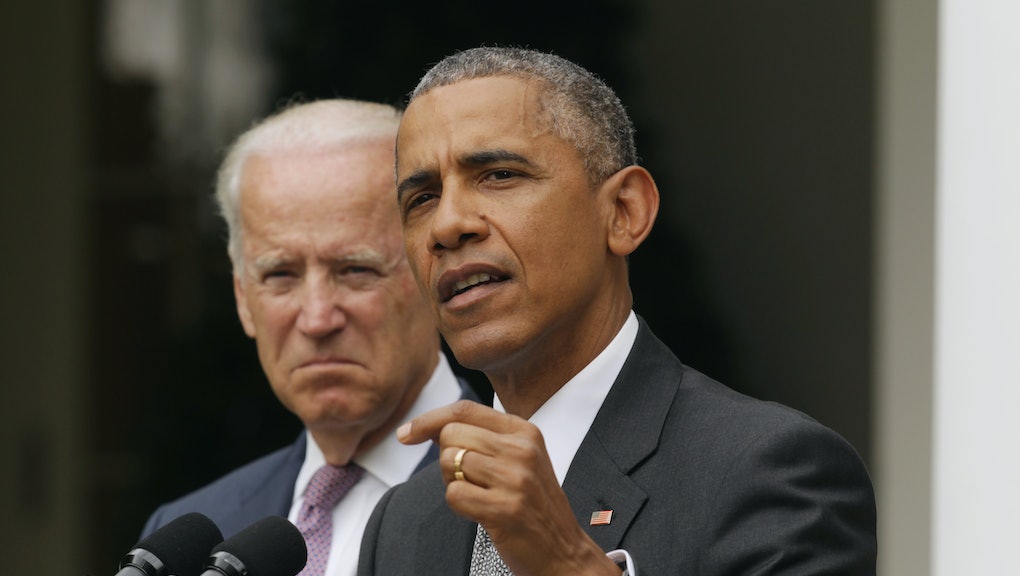 President Barack Obama on Thursday hailed the Supreme Court's decision to uphold a key component of his Affordable Care Act, all but guaranteeing the future of the vital subsidies in 34 states where health care exchanges are managed by the federal government.

"Today after more than 50 votes in Congress to repeal or weaken this law, after a presidential election based in part on preserving or repealing this law, after multiple challenges to this law in the supreme court — the Affordable Care Act is here to stay," Obama said, a note of exasperation in his voice.

Less than two hours before the president came to the podium outside the White House, the high court rejected a conservative challenge to the law by a 6-3 vote, as Chief Justice John Roberts and Justice Anthony Kennedy joined the liberals on the bench in siding with the administration.

Speaking with Vice President Joe Biden by his side, Obama again made the case for his signature domestic policy achievement.

"As the dust has settled, there can be no doubt that this law is working," he said. "It has changed and in some cases saved American lives."

If the Supreme Court had accepted what Obama dismissed as a "partisan challenge," upward of 6 million people who depend on federal subsidies to make their coverage affordable would have been faced with paying the entire cost on their own. The petitioners said the letter of the law only allowed tax credits for buyers in marketplaces established by the state. In his majority opinion, Roberts rejected that narrow reading.

"Congress passed the Affordable Care Act to improve health insurance markets, not to destroy them," Roberts wrote. "If at all possible, we must interpret the Act in a way that is consistent with the former, and avoids the latter."

Obama and supporters of the ACA had long argued that this was plainly obvious. The authors of the law had spoken out extensively, making their intentions clear. For the president, though, the decision affirmed what he framed as a broader truth:

Eleven uninterrupted minutes after he strode to the podium, Obama came to the end of his argument with a half-sigh.

"So this was a good day for America," he said, pausing to tap the podium. "Let's get back to work."

You can watch President Obama's full statement below: