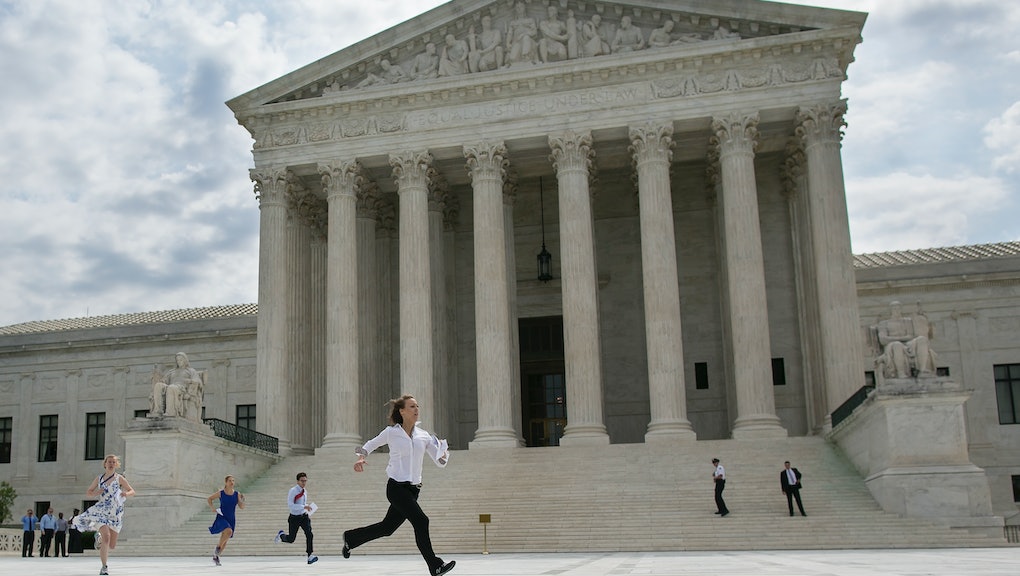 Why the Failed Obamacare Lawsuit Was Doomed From the Beginning

The Supreme Court ruled in favor of the Obama administration on Thursday in a historic case upholding a key provision in the Affordable Care Act. It was the third time in three years that the court had ruled on a case dealing with Obamacare, and it was simultaneously the simplest and craziest case yet.

At issue in King v. Burwell was whether the federal government could subsidize health plans purchased in states that rely on the federal health insurance exchange. The challengers claimed that four words in the law describing the exchanges that were eligible for subsidies as those "established by the State" meant that states which did not set up their own exchanges should not receive federal funds. More than 6 million people enrolled in the federal exchange would have lost subsidies had the court ruled against the government.

The court sided with the Obama administration by a vote of 6-3, with the majority arguing that the court had to consider the full context and purpose of the entire law, rather than focusing on four vague words.

Reading through Chief Justice John Roberts' opinion for the majority, one thing becomes clear: While this decision is a significant victory for the ACA, the challenge in King was preposterous from the start.

The background: When Congress passed the ACA, one of the primary mechanisms for driving down the uninsured rate was by providing tax credits to middle-class Americans who purchased private health insurance plans through a government-run health care marketplace, or exchange. The drafters of the law assumed that states would set up their own exchanges, but included a provision stipulating that the federal government would set up and run exchanges in states that declined to do so.

"Congress passed the Affordable Care Act to improve health insurance markets, not to destroy them."

As it turned out, most states ended up choosing to rely on the federal government to run their exchanges, largely for political reasons. Certain states refused to play along because the law was key to the legacy of President Barack Obama. (A similar trend played out following the court's decision in 2012 that allowed states to turn down federal funds for Medicaid expansion.)

As a result, the text of the law, somewhat sloppily, did not match the reality that emerged when the time came to implement the law. The phrase "established by the State" remained in the section authorizing tax credits. Because of this specific phrasing, some Republican activists saw an opportunity to cripple the ACA by making healthcare unaffordable for those who lived in states without their own exchanges. Thus, King v. Burwell was born.

Why it was ridiculous: The premise of the suit only made sense if you suspended logic and ignored everything about the purpose of the ACA. Congress clearly intended to expand access to health insurance through federal subsidies. The law was clear about that — the legislative history and even Republican Congressional staffers agreed that the federal exchange was always meant to include subsidies.

The matter before the justices was not particularly complex. The key question was whether Congress actually intended for the tax credits to be available to anyone who qualified when it passed a 1,000-page piece of legislation to expand health insurance coverage through tax credits.

Courts frequently have to interpret ambiguous language in legislation and they have rules for doing so. Here, every tool that the courts have for interpreting vague text pointed to the subsidies being permitted.

Despite this, to certain conservative justices, even a simple matter of statutory interpretation could be a chance to take down Obamacare. Had the case been about any legislation other than the Affordable Care Act, it would have never made it to the Supreme Court.

But it did. Thankfully, six justices agreed that an ACA without subsidies would make health care very unaffordable for millions of Americans, and there was no way Congress intended for that to happen.

Roberts saved the day: In the majority opinion, Roberts describes the ACA as a three-part mission to expand health insurance in the U.S. Part one holds that health insurers have to cover anyone who pays for coverage and cannot take their health into consideration when pricing. Part two requires nearly everyone to have health insurance. Part three makes that insurance affordable by providing tax credits to subsidize the costs. The court found that these goals are so intertwined that to destroy one defeats the entire purpose of the landmark law.

Instead, the court sided with logic and saved the ACA once again. If nothing else, the case proved that if you really want to destroy Obamacare, you are going to need a lot more than an irrational legal argument that should have been laughed out of court.