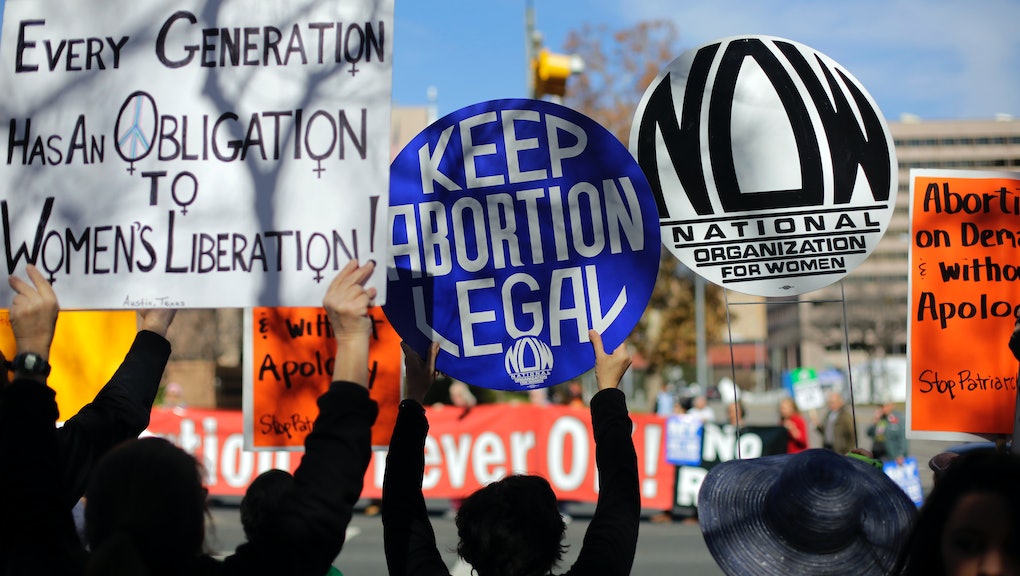 Pro-abortion activists are celebrating a relative victory today: The Supreme Court announced that it will allow nine Texas abortion clinics to remain open until the justices can hear an appeal ordering them to close, the New York Times reported.

Though a law passed in 2013 meant to go into effect July 1, effectively shutting down these clinics, a group of abortion providers filed suit to block the restrictions last year and the Supreme Court ruled that clinics could remain open during this appeal, according to NPR. The restrictions require that Texas abortion clinics meet strict "hospital-like" building standards and requires doctors to have admitting privileges at a nearby hospital — standards that would result in only nine abortion clinics remaining open in the entire state, according to the New York Times.

The New York Times also reports that "other parts of the law took effect in 2013, causing about half of the state's 41 abortion clinics to close. If the contested provisions take effect, abortion rights advocates said, the number of clinics will again be halved."

The hidden roadblocks: While allowing these clinics to remain open — at least for now — is certainly a victory, it maintains a troubling landscape of abortion access for Texas women.

"Over 1 million women of reproductive age in the state of Texas will be more than 150 miles away from one of those facilities, many women having to travel upwards of 300 to 400 miles," Amy Hagstrom Miller, the CEO of Whole Woman's Health and the lead plaintiff in the suit, told NPR.

This legislation adds to a disturbing, increasing pattern of abortion bans across the U.S. While an estimated 1 in 3 women will have an abortion in her lifetime according to the Guttmacher Institute, lawmakers have passed a record-breaking 231 abortion restriction laws in the last four years, and 28 state legislatures have introduced more than 100 anti-abortion bills so far in 2015. And yet, experts note, these bans are hardly effective.

"As states across the country are making abortion harder and harder to access, people will flock to states where there are more abortion clinics," Steph Herold, managing director of the Sea Change Program previously told Mic. Legislation like this, therefore, will not quantifiably reduce the abortion rate in states like Texas, but burden women who seek abortions with spending more money than should be necessary to travel, take time off work, and obtain childcare and possibly lodging.

This legislation will therefore not only fail to meaningfully reduce the abortion rate in Texas, but will further disadvantage already marginalized groups of women, like economically disadvantaged individuals. This will result in something like a "pre-Roe environment where people with means, they can go to Dallas and stay in a hotel for a few days," Hagstrom Miller told NPR.

Studies back this up: One 2013 Guttmacher Institute study, for example, found that upper-class women are three times as likely to be able to access a safe abortion when they need one as compared to their economically disadvantaged counterparts. Forty-two percent of women who have abortions fall below the federal poverty line, according to the Guttmacher Institute and, cyclically, denying women abortion access increases their risk of falling into poverty, ThinkProgress reported in 2012.

Though this Supreme Court decision is relatively promising, there's still plenty of need to remain vigilant. As Hagstrom Miller told NPR, if this legislation is ultimately enacted, "The vast majority of people are going to be denied the safe care that up until this point they've been able to access in Texas."