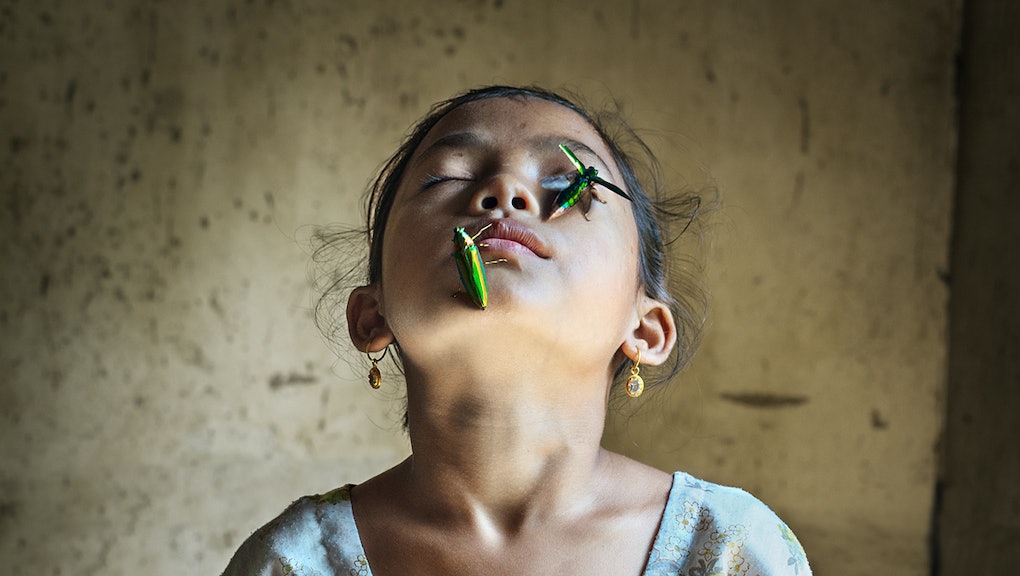 Girls run the world. Beyoncé tried telling you in 2011, and nowhere is her ethos more prominent than among the Khasi of India's Meghalaya state.

Families in Khasi culture are matrilineal: Children take their mother's last name, the youngest daughter in the family gets the inheritance and men move into their mother-in-law's home after marriage.

"To disrespect a woman here is to harm society," said Karolin Klüppel, a Berlin-based photographer whose latest series focuses on Khasi girls and young women, in an interview with Mic.

The result is a society where girls seem instilled with a remarkable sense of self-confidence from birth. Perhaps the rest of the world should take note.

"I decided to make a portrait series of the girls because I was so impressed by their self-assured appearance and thought that this must be how matriliny becomes visible," she said. "I also wanted to show the girls' everyday physical environment — where they live, how they play."

The result is a series that vibrantly renders life in Mawlynnong, a Meghalaya village where much of Khasi culture is centered. Klüppel has appropriately titled the collection "Mädchenland" — or, translated into English, "Kingdom of Girls."

The Khasi still face a unique set of challenges stemming from how their society is organized. As with any culture where benefits are bestowed according to gender (the U.S. immediately comes to mind), inequality exists.

According to the Guardian, a number of Khasi men have united to form their own "men's rights movement" (not to be confused with U.S.-style MRAs). Their mission is geared toward restructuring the family, ostensibly to promote the role of men — but they do so by citing the "natural leadership" qualities with which men are supposedly "endowed," according to movement leader Kaith Pariat, as quoted by the Guardian in 2011.

Shaky logic aside, their cause is weakened even more by the fact that "matrilineal" doesn't actually translate to "matriarchal" in their culture. That men still occupy all the chief government ministry positions in Meghalaya does little to legitimize their claims.

At the same time: Local reporter Patricia Mukkum has insisted to the BBC that her Khasi upbringing is the driving force behind her success as a self-sufficient career woman and mother. "Our culture offers a very safe sanctuary for women," she told them.

Klüppel says that she "experienced the girls [in Mawlynnong as] very present and wild in a positive way, but also respectful and responsible-minded."

Whether day-to-day life in Khasi society is preferable to its patrilineal alternatives is largely a matter of subjectivity. But what's undeniable is this: A society that empowers girls and invests in their confidence from Day One is a society that produces powerful, confident and self-sufficient women.

And that's a good thing for everybody.

All photos courtesy of Karolin Klüppel. See more of Klüppel's work at her website. "Kingdom of Girls" will also be on display at the Half King gallery in New York City from July 21 to Sept. 26.