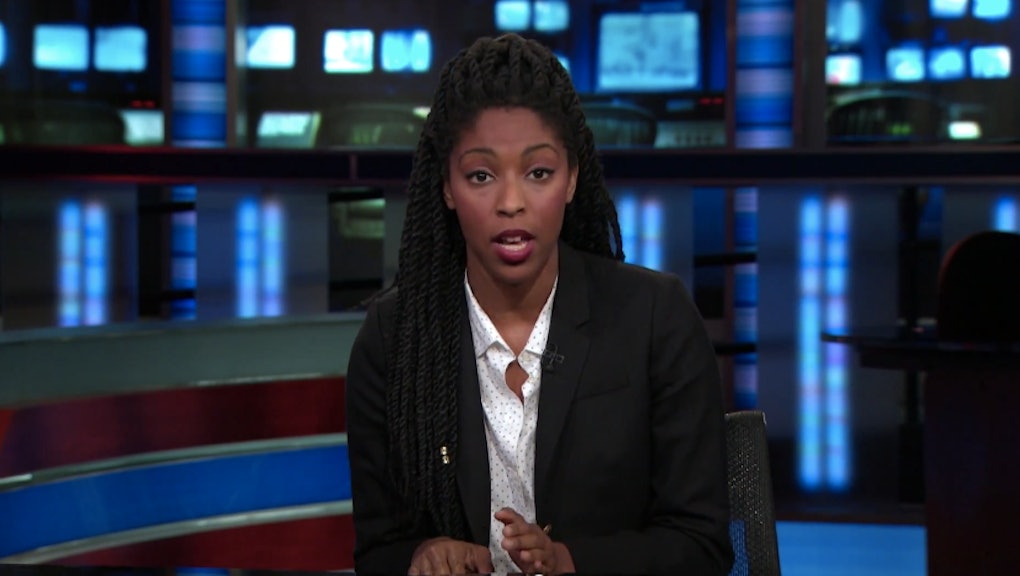 In One Quote, Jessica Williams Nails the Problem With Women on the $10

When the Treasury Department announced last Wednesday that a woman will appear on the $10 bill, many rejoiced. Considering a woman has never been featured on U.S. paper currency, the decision seemed like feminist progress. But, thankfully, rising star Jessica Williams breaks down exactly why we should remain cautious about this supposed victory.

When Daily Show host Jon Stewart asks Williams to confirm that this decision was a "giant leap for womankind" on Thursday night's episode, Williams responds skeptically.

"Yeah, sure, if by 'giant leap' you mean you mean 'awkward trip forward on jagged sidewalk that you pretend you did on purpose'," she says.

"Do you actually think that a bunch of people in the Treasury Department got together and said, 'You know what? Let's do something for women today,'" Williams facetiously asks Stewart.

"The $10 was just next in line for a makeover," she explains. "And you know who loves makeovers? Girls, Jon. Dames. It's insulting."

And women don't even get the entire bill to themselves, she adds. As previously reported, Treasury Secretary Jack Lew said he wanted to keep Alexander Hamilton included on the bill in some capacity.

"So the ladies' bill still has a chaperone?" she muses. "'We'll put you on the $10, ladies, but Alexander — go with them to make sure they don't do any impulse buys.'"

What's more, paper money "won't even be a thing" by the time the bill comes out in 2020, Williams says.

"That's always how it works, Jon, they put our faces on things that are about to disappear. They did it with coins, stamps, and now the $10. Shoot, I'm surprised they haven't put our faces on payphones."

It would be far more meaningful to make Harriet Tubman the face of PayPal or put Eleanor Roosevelt on the face of ApplePay or Olivia Pope on BitCoin.

And then Williams perfectly summarizes the entire debate surrounding this campaign for equal representation on currency.

"Honestly, Jon, at the end of the day I don't give a damn who is on the bill," she says. "What I do care about is getting an equal share of the bill. I'd rather have 10 full Hamilton dollars than $8.45 of lady bucks. Let's spend our time focusing on that."

Jokes aside, Williams makes an excellent point. The gender wage gap persists today in every state in this country and in nearly every occupation, according to AAUW. This pay gap is even worse for women of color and grows with age, according to the same organization.

Williams' point, therefore, is well taken. Perhaps it's more important to focus on systemic issues of gender inequality before we wage war on those that are more cosmetic in nature.