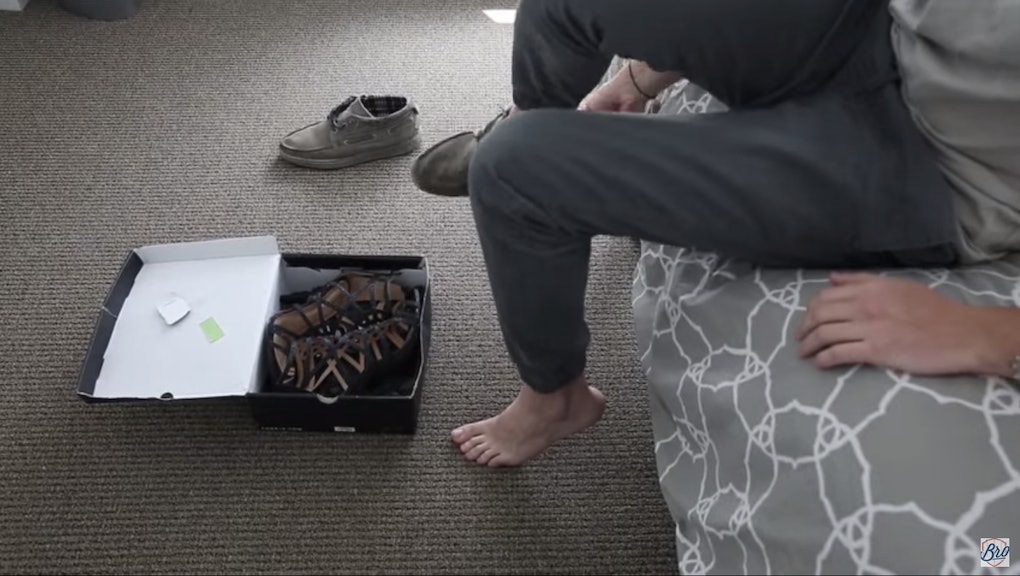 In yet another entry in the "dudes try stuff women do every day" canon, a male video correspondent for BroBible thought he'd do a little experiment to "see why girls won't stop complaining about wearing high heels," and "to show them what wimps they are" by documenting a full day of himself walking around in black stilettos.

The joke, as it turns out, was on Brandon Cohen, the man in question, who starts out his little journey wearing heels looking like a baby giraffe learning to walk. Less than 30 seconds into the 3:43 minute-long video and he's already given in.

"I'm already in so much pain, it's astounding," he says on camera. Yeah, we know heels are painful. All people who regularly wear heels know that. Why should it take a day-long experiment for a man to realize that?

The rest of the video includes footage of Cohen hobbling along streets, using handrails to walk down stairs and struggling to go about his workday normally. The video clearly highlights the struggle that comes with wearing heels for long periods of time, which was the intent, Cohen told Mic in an email.

"It's harder to empathize with someone about something that you have no concept of yourself," Cohen said.

"I think the old adage of 'you can't judge me until you've walked a mile in my shoes,' while eye-rollingly on the nose, is extremely apropos for this experience. All guys know that heels hurt, but I think once dudes saw how much I struggled, they would hopefully have a little more respect for something that women do all the time," he added.

Which is good, because heels suck. Wearing them for long periods of time can result in a host of health problems like the altering of your foot's shape, ankle twists, back pain and a weakening of the knee joints, podiatrists previously told Mic.

But the worst part of heels is that they're expected for women: Airline stewardesses and restaurant waitresses are often forced into wearing them for their jobs, if not pressured by the unspoken cultural beauty norms that say long legs with arched feet are more beautiful than flat ones.

Which is the very point the video misses. Cohen experiences the literal pain of heels, but not the societal requirement to wear them. As the Cut wisely pointed out, such viral, male-centric videos that showcase men enduring the everyday "struggles" women face certainly grab attention. Cohen's video is full of little quips to the camera, like "it's tough to be a chick," and "this is Chinese foot binding but in modern form."

But such hilarious jaunts in women's literal and figurative shoes distract from the fact that for men, it's fun and games — for women, it's not just a matter of a one-day viral video. Men should be able to acknowledge that without having to literally walk in women's shoes, no matter how well-intended the video.

Let's hope that men do understand, so long as they don't treat us differently when we wear flats.