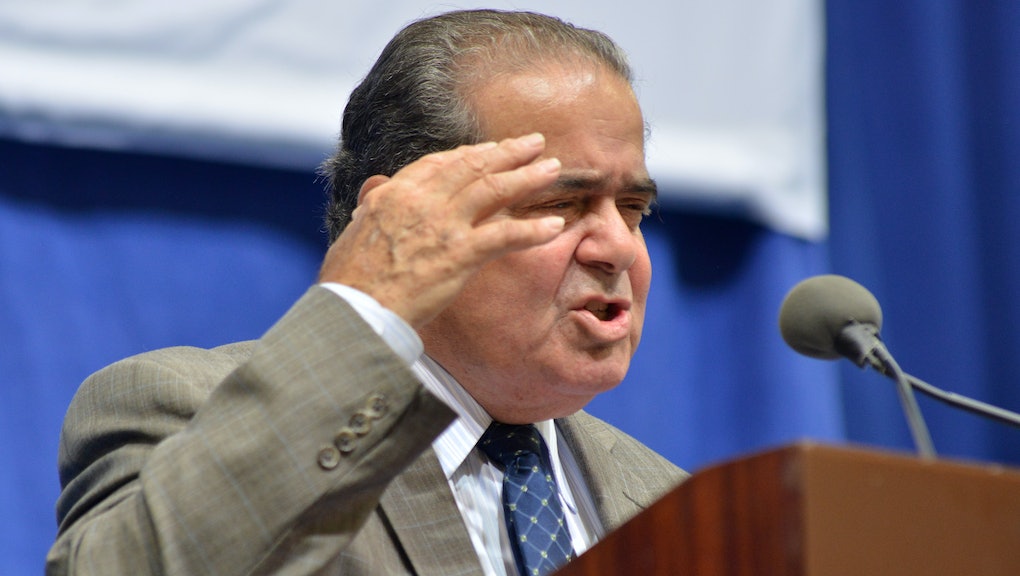 On Friday, the United States erupted in spontaneous celebration after the Supreme Court ruled a 5-4 decision in Obergefell v. Hodges, effectively legalizing same-sex marriage. One man who wasn't celebrating, however, was Justice Antonin Scalia, one of the four justices of the court who voted against the ruling.

In an angry dissent — one of four produced by the court — Scalia railed against the decision. The conservative justice has been fighting marriage equality from the bench for years. In what could be his last chance to weigh in on the subject, he decided to go out with a bang.

Below are the seven most memorable, most Scalia moments from his dissent.

1. Robbing the people of freedom

"robs the People of the most important liberty they asserted in the Declaration of Independence and won in the Revolution of 1776: the freedom to govern themselves."

"I write separately to call attention to this court's threat to American democracy."

"But what really astounds is the hubris reflected in today's judicial Putsch."

4. A veneer of law buried by mummeries

"But the court ends this debate, in an opinion lacking even a thin veneer of law. Buried beneath the mummeries and straining-to-be-memorable passages of the opinion is a candid and startling assertion."

"This is a naked judicial claim to legislative — indeed, super-legislative — power; a claim fundamentally at odds with our system of government."

"(Really? Who ever thought that intimacy and spirituality [whatever that means] were freedoms? And if intimacy is, one would think Freedom of Intimacy is abridged rather than expanded by marriage. Ask the nearest hippie. Expression, sure enough, is a freedom, but anyone in a long-lasting marriage will attest that that happy state constricts, rather than expands, what one can prudently say.)"