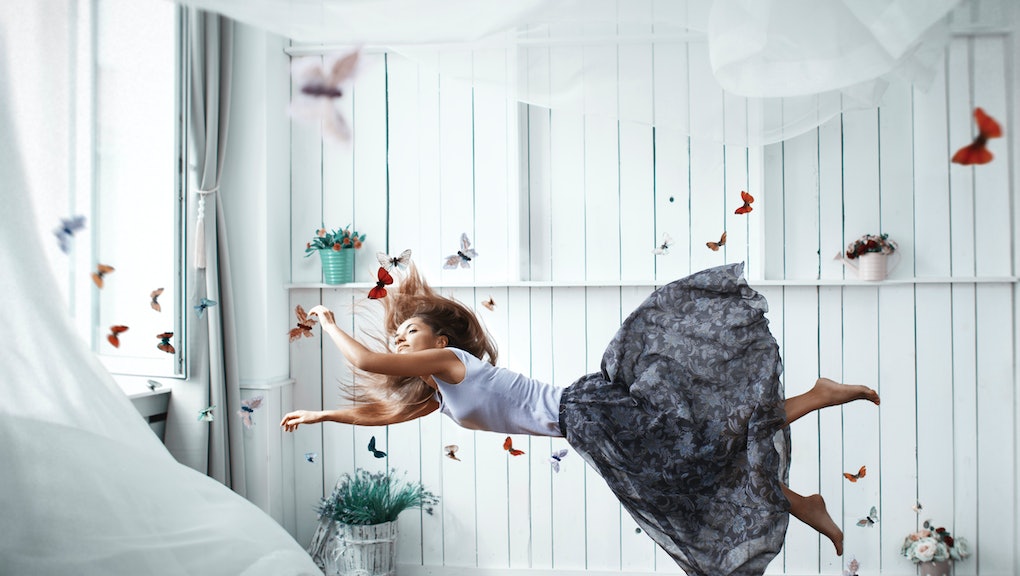 "The patterns are everywhere," says Someone_Who_Isnt_You. By her own admission, she's taken a dose of something weird, and now she's tripping. How badly? "The purples look like fractals dancing on white alabaster clouds."

"Do you know how to meditate?" a user named _angel asks her. "Lay down, close your eyes, take nice long deep breaths, and relax like the type of relaxing before going to sleep. Just relax and enjoy the euphoria." She adds a smiley face emoji to show it's going to be OK. "Let go of your body, the world around you, your room, or anything," she says. "Just free fall into a dream. (You will not sleep, but similar.)"

"Got any faux fur, or stuffed animals?" _angel asks back. "Shit feels good."

Someone_Who_Isnt_You likes this idea. She asks _angel, "Would it be weird to feel yourself because we're animals too?!"

Welcome to TripSit, a Reddit community where volunteers — or "sitters" — promote the safe use of drugs by babysitting freaked-out stoners.

One of those sitters, a 25-year-old named Eric Hoftiezer who has experienced his fair share of bad highs, has been managing the TripSit network for about four years. He's one of 10 staffers on the subreddit, but the real focus of TripSit is its IRC chat room, where 30 sitters handle 10 to 50 cases daily. Most traffic arrives on the weekends. "Some require more attention than others, but there's never a day when someone doesn't need some kind of assistance," Hoftiezer told Mic.

Between the chat room, the subreddit, and a pile of wiki pages and fact sheets, TripSit's resources attract over 6,000 hits per day, according to Hoftiezer. And it's all in the name of monitoring strangers who overindulged.

How it works: When a user enters either the subreddit or the chat room, Hoftiezer and his team first try to figure out what the person took, both the substance and the dosage. Someone on a low dose of psychedelics may just want to talk through a hallucination. Others may be chock-full of LSD and need some more talking down. After making sure they haven't taken a dangerous or lethal dose, the sitters will reassure a tripper that everything's safe, to just relax and to put on some calming music, for which a lot of sitters have a list of go-to chill-out songs, like Emancipator's "Maps." By that time, the trip is usually contained, and the freakout has subsided.

But not all trips are of the cloud-romping, breakdancing-with-unicorns variety. Many go poorly on the subreddit, and that's when things get a little scary. Most users aren't in any actual danger, but they've managed to back themselves into a corner of their own minds. They're anxious about getting caught or being on the brink of death. Many just want to stop freaking out. A user on TripSit might experience a week-long meth binge, or take a hallucinogen and lose the ability to determine whether they're imagining something or not. Many young, inexperienced users find themselves convinced the trip will never end.

This week, an 18-year-old who tried what's called a "lemon tek" — grinding up magic mushrooms, soaking them in lemon juice and drinking it like a shot — flocked to the forum to seek help. He'd already acted out toward his neighbors, lost his ability to talk and was convinced he was about to die.

At the height of his trip, NotTelkin wrote:

"i lost my language and everything is so fucking weird,i cant think anything and i dont care about anything,am i gonig to die now? pls respond as fast as you can i pray to you"

Hoftiezer was the one who came to his rescue after he began talking about dying. "Your parents love you, and if you want to change then you have the ability within you to do so," he wrote in one instance. "You don't need to die my friend. Just breathe and understand that things will go back to normal in time."

Drug abuse is a grim reality in America. Overdoses outnumber both gun- and traffic-related deaths, according to the Centers for Disease Control and Prevention. Of the 38,329 drug deaths the CDC recorded, roughly 30,000 were accidental.

In 2003, Brandon Vedas, a 21-year-old from Phoenix, Arizona, went onto an IRC chat room called #shroomery, turned on his webcam and ingested enough drugs to kill him. People in the chat room egged him on, calling him a pussy if he didn't keep going. Throughout the evening, he reportedly ingested 320 milligrams of the synthetic opiate methadone, 24 milligrams of clonazepam, 120 milligrams of Restoril, 290 milligrams of the beta blocker Inderal, 8 grams of mushrooms, two Vicodin, some Bacardi 151 and weed — and maybe more: As the evening wore on, his writing became erratic and misspelled.

Toward the end of his trip, users on the board started saying he would overdose. They tried to find where he lived to send the police to get him before he died. But they were too late.

Hoftiezer didn't know about Vedas when TripSit was founded. But he believes his community could put a stop to the same tragedy happening among them. "We can't save everyone, but for the people on our network we certainly won't watch them on cam ingest a bunch of substances," Hoftiezer told Mic. "We do our best to recognize when people are overdoing it, and we talk with them, try to refer them to doctors who can help. Users who are going overboard like Brandon did are not celebrated at all."

It seems strange to go online when you're having a bad trip, dialing into the part of your brain necessary for cognition when you can't trust your own cognition in the first place. Hoftiezer recommends seeking medical attention if you're too far gone to type on Reddit. But if you can, he and the TripSit team mostly want to be there to give you someone to talk to.

If nothing else, they'll tell you what kind of stuffed animals feel the best when you're on ecstasy.