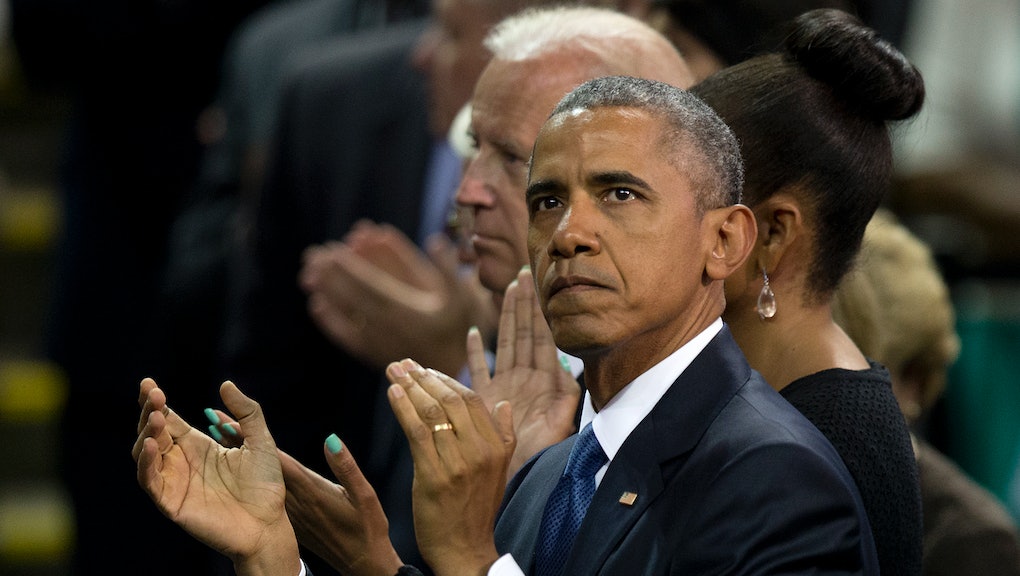 It wasn't supposed to go down like this. In the aftermath of the 2014 midterm elections, when Democrats ceded control of the Senate and saw their deficit steepen in statehouses across the country, President Barack Obama was widely expected to set aside his ambitions and map out a more cautious agenda.

That was eight months ago.

After a thrilling and fraught week in Washington, D.C., and South Carolina, Obama's legacy is coming into plain view — and emerging as one of the sharpest and most significant in the last century of liberal politics.

The quick succession of Supreme Court rulings, first to reject a last gasp challenge to a key portion of Obama's Affordable Care Act and, a day later, to embrace his administration's late push to guarantee marriage equality have underlined a game-changing era of hard-won and deeply meaningful social progress.

A vote for action: Sixteen days after the midterm rout, Obama used his executive authorities in an attempt to shield from deportation as many as 5 million people living in the U.S. illegally. Hillary Clinton, now running for president herself, promised in May to use Obama's move as a stepping stone to even broader action.

In December, he moved to normalize relations with Cuba after more than 50 years of fruitless economic isolation. By the spring, the administration's top diplomat, Secretary of State John Kerry, had agreed to the framework of a deal that would, if formally agreed, implemented and carried out, set Iran back a generation in its pursuit of a nuclear weapon. And when 196 nations arrive in Paris in November for a U.N. climate conference, the U.S. will be able to tout its historic 2014 agreement with the Chinese to cut, halt and reverse carbon emission trends.

On race: Meanwhile, the Black Lives Matter movement continued to defy expectations and gain currency as a political force. Obama has been and remains exceedingly careful about relating his own experiences to those of the protesters in Ferguson, Missouri, New York and Baltimore, where demonstrations descended into scattered riots after 25-year-old Freddie Gray was killed in police custody in April.

But in the 11 days following the massacre at Emanuel African Methodist Episcopal Church in Charleston, South Carolina, Obama has sharpened his tone.

"At some point, as a country we have to reckon with what happens," he said. "It is not good enough simply to show sympathy."

Obama was making the case for boldness in the fight for stricter gun control laws. Yet it felt like something more. One week later, on Friday afternoon, that something was on full, passionate display in Charleston, where Obama eulogized Sen. Clementa Pinckney, the pastor of "Mother Emanuel" and one of nine black victims in the church shooting.

Before he so famously led the more than 5,500 in attendance in singing "Amazing Grace," Obama made plain the nature of the crime that had brought him to South Carolina.

"It was an act that drew on a long history of bombs and arson and shots fired at churches, not random, but as a means of control, a way to terrorize and oppress," he said. "An act that [the alleged killer] imagined would incite fear and recrimination; violence and suspicion. An act that he presumed would deepen divisions that trace back to our nation's original sin.

"Oh, but God works in mysterious ways." From that moment on, for as long as he held the stage, Obama had become the "Reverend President."

This was a different persona from the "professorial" character many have described, usually as a term of derision. Maybe it was the church, the praise chorus rallying behind him as he spoke. But maybe too, it was the momentum of the past week, which began with an interview on comedian Marc Maron's WTF podcast, in which Obama spoke  frankly about the paradox of race and progress.

Where he stands: Obama is a progressive in the truest historical definition of the term. Like President Teddy Roosevelt, who along with his supporters gave rise to the first wave of the movement in the early 1900s, and President Franklin D. Roosevelt, author of the "New Deal" and Social Security, Obama has rejected notions of the U.S. as a center-right country by championing environmental causes and minimum wage hikes, all while building a more robust welfare state.

Much like President Lyndon B. Johnson, who passed a remarkable range of civil rights legislation through Congress before moving on to Medicare and Medicaid during a two-year period between 1964 and 1966, Obama will see his domestic policy achievements weighed against failures abroad. For Johnson, the escalation of the Vietnam War would be his albatross; in Obama's case, it is the shameful and deadly drone war over Afghanistan, Pakistan and Yemen.

Obama seems to know or understand this. New Yorker editor David Remnick shared a startling piece of self-analysis Friday from the president, whom he has interviewed on a number of occasions.

"...every morning and every night I'm taking measure of my actions against the options and possibilities available to me, understanding that there are going to be mistakes that I make and my team makes and that America makes; understanding that there are going to be limits to the good we can do and the bad that we can prevent, and that there's going to be tragedy out there and, by occupying this office, I am part of that tragedy occasionally, but that, if I am doing my very best and basing my decisions on the core values and ideals that I was brought up with and that I think are pretty consistent with those of most Americans, that, at the end of the day, things will be better rather than worse."

Obama's words here are from early 2014, months before unarmed black teen Michael Brown was slain on a hot summer street in Ferguson, Missouri, by a white police officer. Despite nearly 18 months of upheaval, alternating with frustration and triumph in almost equal measure, Obama has never appeared more confident. Obamacare has survived and mostly thrived as his voice — which tapped such rich veins in Charleston — has been written on the heart of a rapidly evolving social order.

Asked by Maron during their podcast interview about what he's learned about himself during these nearly seven years in the White House, Obama compared his experience to that of a professional athlete in the late stages of his prime.

"You might slow down a little bit, and you might not jump as high as you used to," Obama said, "but I know what I'm doing, and I'm fearless."