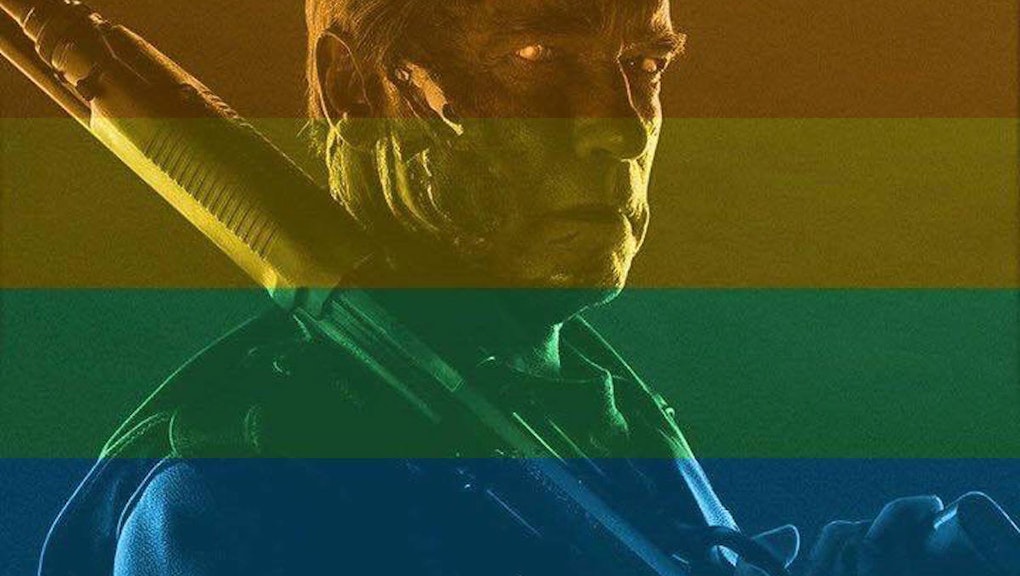 Within the first couple of hours after the historic Supreme Court ruling favoring same-sex marriage on Friday, more than a million people filtered their Facebook profile pictures with a rainbow overlay, and many more followed over the weekend. The sign of solidarity was in reference to the rainbow flag, a universal symbol for LGBTQ pride.

Arnold Schwarzenegger (aka the Terminator, aka the Governator, aka Kindergarten Cop)  was one such individual who used social media to show his support for same-sex marriage.

However, one of his fans was not, well, a fan of this and posted a comment on Schwarzenegger's rainbow-filtered profile: "What's wrong with U Arnie? I have to unlike..."

It didn't take long before Schwarzenegger offered his pithy, perfect response to the man's homophobia. "Hasta la vista," he wrote, quoting his catchphrase as the famed cyborg assassin.

The Hollywood star's gay rights' support was in keeping with an interview he did with USA Today on Friday for the latest installment in the Terminator franchise, which was conducted shortly after the SCOTUS ruling. "I'm happy that finally they made the leap forward in the United States," he said.

"Politicians sometimes get stuck in their ideological corners, and then nothing gets done," the former governor of California reflected. "And it happens too often in America, and so it is good that we have a judiciary branch that sometimes can step in and give guidance in that direction."

After a Chief U.S. District Judge in California found Proposition 8 (a voter-approved ban on same-sex marriage) unconstitutional, Schwarzenegger stood up to pressure from conservative groups in 2010 and refused to appeal the court's decision.

The Supreme Court's decision produced a wide range of strong reactions, some more than a little bigoted. One Fox newscaster thought the ruling meant three people could enter into a marriage, and Justice Scalia's dissent was scathing. "The opinion is couched in a style that is as pretentious as its content is egotistic," he wrote.

"In this case, it is just very simple," Schwarzenegger noted to USA Today. "You cannot deny someone, you know, a right, just because they're gay." And with that, the Terminator says it all.