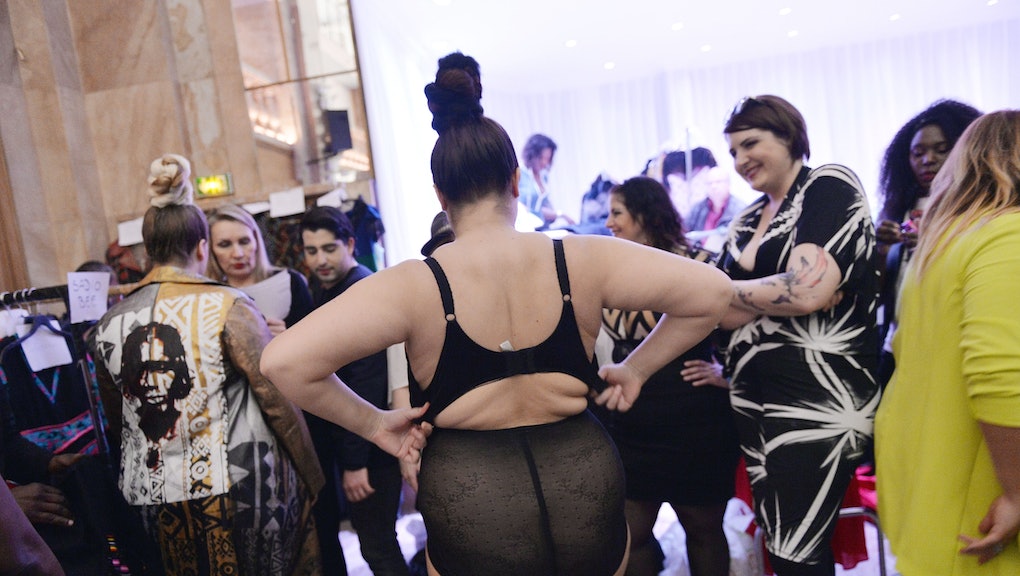 Here's What Our Obsession With 'Plus Size' Really Says About Us

When People put Tess Holliday on its cover in May, the headline shouted: "The World's First Size 22 Supermodel!"

The headline makes it clear: Those double digits are the most important fact readers should know. Because even when we trumpet that "size doesn't matter," we are proving that it really, really does. In fact, we're obsessed with it.

That obsession is clear when we celebrate "plus size models" like Ashley Graham for her figure, but endlessly debate whether size 10 Myla Dalbesio should get the "plus" label; when we laud Holliday for her positivity then debate whether, at a size 22, she's part of a "freak show"; and when we praise model Robyn Lawley for representing plus-size bodies in Sports Illustrated, then chide the magazine for acknowledging that "plus-size" status.

We might be all about plus size these days as we advocate for universal body acceptance. But good intentions aside, our obsessive use of the term "plus size" reveals a constant need to classify the "norm" and designate anything outside of it as "Other."

And that burning need to categorize models and clothing shows how far we have to go toward accepting all body types as normal.

From a shopping category to a symbol: The term "plus size" used to designate certain sizes of clothing for shoppers in stores. Lane Bryant, one of the original plus-size women's stores, was founded in the early 1900s; Evans, a British plus-size retailer, was got its start in 1930. The term might not have been hotly contested, but it's connotation was clear.

"The expression 'plus size' is ... usually equated with fatness," Amanda M. Czerniawski, a sociologist and author of Fashioning Fat: Inside Plus-Size Modeling, told Mic in an email.

That was for clothing. But over the last two decades, the term was introduced into the modeling world to describe models, said Darrianne Donnelly, the founder of BGM Models, the first plus-size modeling agency in Australia, to Mic. In the world of runways and magazine covers, the label "plus size" came to refer to a model who is two sizes "plus" the standard industry size, Donnelly said. That translated into roughly a size 8, two sizes bigger than the (barely permissible) size 4.

Calling a size-8 model "plus size" is a shock to the real women out there, shopping for clothing labeled "plus size" at size 12... or 14. Retail doesn't have one standard for labeling clothes, nor does the modeling industry have one standard for labeling models, as evidenced by the brouhaha over Calvin Klein model Myla Dalbesio ("who, at a size 10, is what the fashion industry would — still, surprisingly — call 'plus size,'" noted Leah Chernikoff on Elle.com).

"Ultimately, the term 'plus size' becomes increasingly meaningless when used to categorize clothing sizes that the average woman wears. It does not accurately reflect the nature of the bodies it supposedly describes," Czerniawski said.

Our obsession with categorizing: Clearly the term is confusing. But instead of jettisoning it altogether, we've leaned into it, endlessly debating who earns it and who doesn't. We can drop the term or reclaim it in the name of body positivity; either way, it's the fixation on the title that needs a makeover.

Citing the work of sociologist Erving Goffman, Czerniawski explains that it's our human instinct to label one another based on appearance: How a person physically looks leads us to draw certain conclusions about them. "It is society that attributes meaning to the body, which then opens individuals to categorization and classification. Stigma, therefore, is the reflection of society's views and prejudices," Czerniawski said.

And fixating on categorizing with the label "plus-size" reflects a prejudice. We focus on who's plus-size and who's not because we want to know where we stand — and label what we're most definitely not.

"It's the general populace ... who is offended when they see the word and they go, 'She's not plus-size,'" Donnelly said.

Put another way, as Lesley Kinzel wrote on xoJane, "See also the oft-repeated idea that, 'If SHE'S plus size, what does that make me?' Well, a GROTESQUE OBESE CORPULENCE-MONSTER, obviously." Our insecurity over our own sizes makes labeling others that much more important.

Dropping the plus for good: What needs to happen now is a focus shift, a move beyond terminology. "Regardless of how it might be misused in modeling contexts, 'plus size' shouldn't be an insult, or a detraction, nor is it necessarily a bad or lesser status of body," Kinzel wrote. "'Plus size' ought to be a simple descriptor of a group of sizes, not unlike 'petite' or 'tall.'"

But it's not. It's imbued with power and stigma that we use to categorize models and, by extension, ourselves. That's why models like Robyn Lawley are so outspoken about ditching the term, as is Stefania Ferrario, the Australian-born model who helped launch #droptheplus.

Even the ultra body positive #droptheplus campaign has been critiqued for trying to counter a label because "women don't want to be tarred with the fat brush," as Bethany Rutter noted at the Independent. By that token, dropping the label "plus size" is just another way to avoid anything and everything associated with fatness.

That may be the case. Either way, the conversation needs to evolve, and campaigns like #droptheplus are a well-intended start. What we should really drop, though, is our fixation on size entirely.