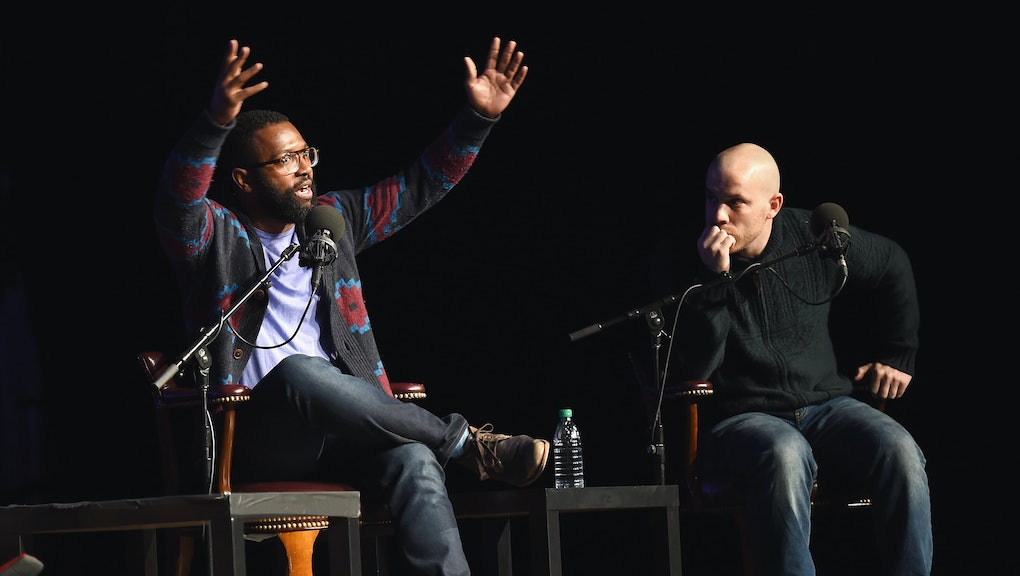 My Thanksgiving dinner table conversation, like many across the country, stopped cold in its tracks over a political argument that came down — as many do — to perception. Perception of who can talk about racial justice, who can be angry and how to be an ally.

I have held on to that moment, trying to fully understand what my family member meant with their weighty accusation that I was speaking like, and perhaps on behalf of, another race.

I was a "whiteboy" in the '90s. Nas had convinced us that hip-hop ruled the world; black political influence was beginning to emerge in the hip-hop industry; fashion was dominated by Phat Farm, Sean John, Rocawear and Enyce; and Lauryn Hill was the great educator of youth culture. Los Angeles had already rioted after the acquittals in the Rodney King trial, O.J. and his white Bronco had seen their day in court and Colin Powell had led America to a perceived victory in Operation Desert Storm. A new America was on the brink of exploding, and I didn't want to be left behind.

I learned at a young age that when you don't grow up with struggle, you have many options. One is to continue living in a bubble, not realizing how you are contributing to the suffering of other people. You rationalize your behavior by parading your "black friend" as the reason you could never be racist. Instead, I chose to recognize my white privilege and talk openly about it, without shame or fear of judgment, because it was the only way I could truly open myself up to becoming an ally to those fighting for justice.

Allies often carry a host of faulty assumptions. We think being an ally means we are "helping" black people. We think we are "needed" because no one will listen to black people. We imagine we have a better understanding of how things work, and therefore we should be included in important conversations. We think we set the rules of our allyship, like what time the protest starts or what color the flyer is going to be.

What I have learned over the years is that the best ally to the black community is one who accepts black leadership and follows their playbook in solving the critical issues of our time. This is the same when it comes to the Latino community, or the LGBTQ community or the feminist movement. No matter who we are in allyship with, those we support determine the rules to the game themselves.

If you're white like me, you might ask the question, "Where do we, white people, find ourselves at the table of justice and human equality?" First, it's best to receive an invitation. But even if you just show up, it's best to put your head down and do the work. When you go to marches and rallies, fill in the gaps in the middle of the crowd. No need to grab the megaphone and lead the cheers up front. Engage in dialogue on social media with honesty and openness to being challenged about your privilege. Don't be afraid to be uncomfortable. And when you go to sleep at night, realize that you have the freedom to fight for justice, but never have to worry about the system's unjustness turning towards you.

No matter who we are in allyship with, those we support determine the rules to the game themselves.

The best ally commandments I've ever heard were articulated a few years back, during an early morning teaching on the Melissa Harris-Perry Show on MSNBC. During the show, Perry broke down the science:

1. Don't demand that those you are supporting produce proof of the inequality they are working to resist.

2. Do recognize that the shield of your privilege may blind you to others' experience of injustice.

3. Don't offer up your relationship with a member of the marginalized group as evidence of your understanding.

4. Do be open to learning and expanding your consciousness by listening more and talking less.

5. Don't see yourself as Kevin Costner in Dances with Wolves or Tom Cruise in The Last Samurai. You are not the savior riding to the rescue on a white horse. Do notice that you are joining a group of people who are already working to save themselves.

6. Do realize the only requirement you need to enter allyship is a commitment to justice and human equality.

Remember that often, your place is at your own table, with your friends and family, who may not understand their own experience of privilege, who may even ask why "you talk like you're black." You might be the one to help them better appreciate that you are part of a struggle for justice and human equality that has implications for all of us, because our future — as a nation, as a people — is intertwined.