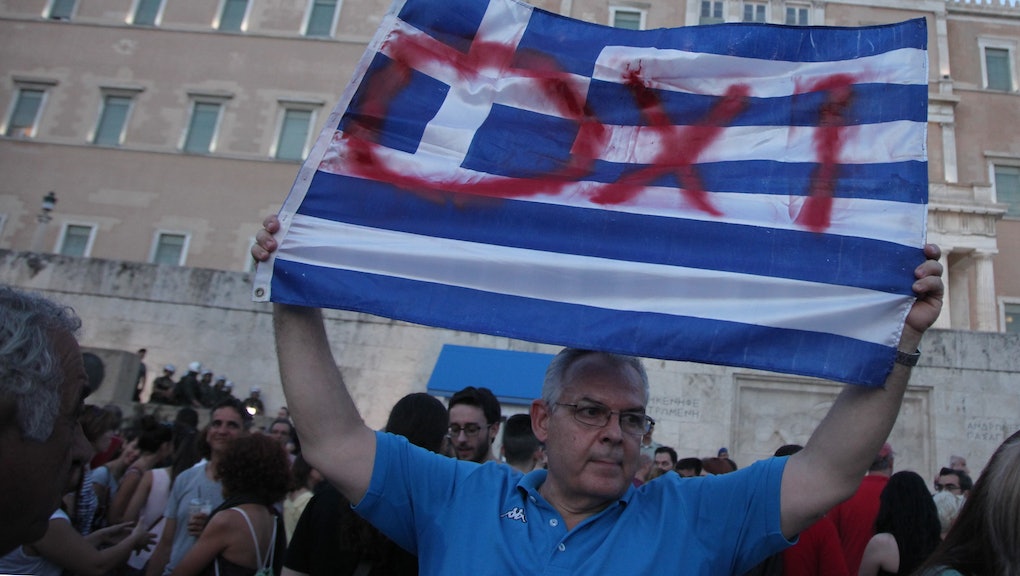 Greece's Economy May Be About to Collapse — Here's How It Happened

Greece, the eurozone, the whole world: We're all in the red.

Debt negotiations between Greece and the European Central Bank began to fall apart on Friday, and all but atomized in the days leading to the current agreement's expiration at end of day Tuesday, when Greece is due to pay back its $1.8 billion International Monetary Fund loan, which it most likely can't afford.

If unable to pay, Greece will default on its gargantuan loan. If things go poorly, that could force them out of the eurozone and create a new Greek currency in lieu of the euro, the currency shared by 19 countries in the European Union. The struggling country asked for an extension on Friday, which was swiftly rejected by eurozone finance ministers the following day.

There's still time to find a compromise, but as the deadline draws nearer, nervousness can be felt across the world, as evidenced by bruised stock markets. The Dow Jones industrial average, Nasdaq, Euro Stoxx 50 Index and the Financial Times Stock Exchange in London all fell on Monday morning.

It's a bad situation with few good outcomes, to be sure.

How did this devolve into a crisis? Unfortunately, this has been a long time coming. The more recent problems started in the run-up to the 2008 recession, when Greece was scrambling to recover from one of the most expensive Olympic games in history, which they hosted in 2004. After a credit downgrade in December 2009, the ECB put tremendous pressure on the country to adopt austerity measures. It was around this time its problems began to intensify and the country began borrowing much more than anyone else in the eurozone.

Now, Greece is in desperate need of the bailout money. Without the ECB's final installment of funding, Greek banks were forced to shut down until July 6 because the country lacked the financial liquidity to keep the banks running — i.e., they literally did not have enough money. ATMs are open (for now), but everyone currently has a 60 euro ($67) withdrawal limit per day.

"We should be clear: Almost none of the huge amount of money loaned to Greece has actually gone there. It has gone to pay out private-sector creditors — including German and French banks," Stiglitz wrote in an op-ed for Project Syndicate Monday. "Greece has gotten but a pittance, but it has paid a high price to preserve these countries' banking systems."

Stiglitz also suggests Greek Prime Minister Alexis Tsipras' left-leaning government is at odds with the more conservative fiscal policy that has dominated the EU, one that has seen rising inequality.

So what's going to happen? At this point, with so many moving pieces and unknowns, it's hard to say. But for the sake of argument, let's consider a "doomsday scenario" in which no deal is met, Greece defaults on its loans and withdraws from the eurozone.

Firstly, such a momental change would have ripple effects in the world economy and potentially result in a steep decline of stock markets. Greece defaulting would send a shockwave through financial markets across the world and generate instability. If Greece ultimately pulls out of the eurozone, it is likely the aftershocks will be felt from Warsaw to Wall Street.

After that, Greece could plummet further into poverty, with a highly devalued currency of its own and even higher unemployment rates than already exist. Currently, around a quarter of its working population is unemployed and for those under 25, the number jumps up to approximately 50% unemployment. Those numbers could easily get much worse.

As things get worse, Greece, in its darkest hour, could turn to Russia, potentially allowing Putin and his brethren influence over the NATO-member. Though there's nothing specific to fear about Russia at the moment, given its general wildcard status (on exhibit in last year's Ukraine conflict), such a scenario isn't exactly ideal for the Obama administration, which has been making last-ditch efforts to help avoiding catastrophe.

As all this unfolds, such a dramatic turn of events could also generate political instability within Europe, as ruling governments could be punished in their next elections if they're regarded as either too punitive or too lenient on Greece by the general public. This is a very real concern for Germany, for example, which contributed a lot of money to the bailout. It could also unravel the eurozone, with other countries following Greece's exit, taking it as a sign the euro isn't strong enough to sustain them all.