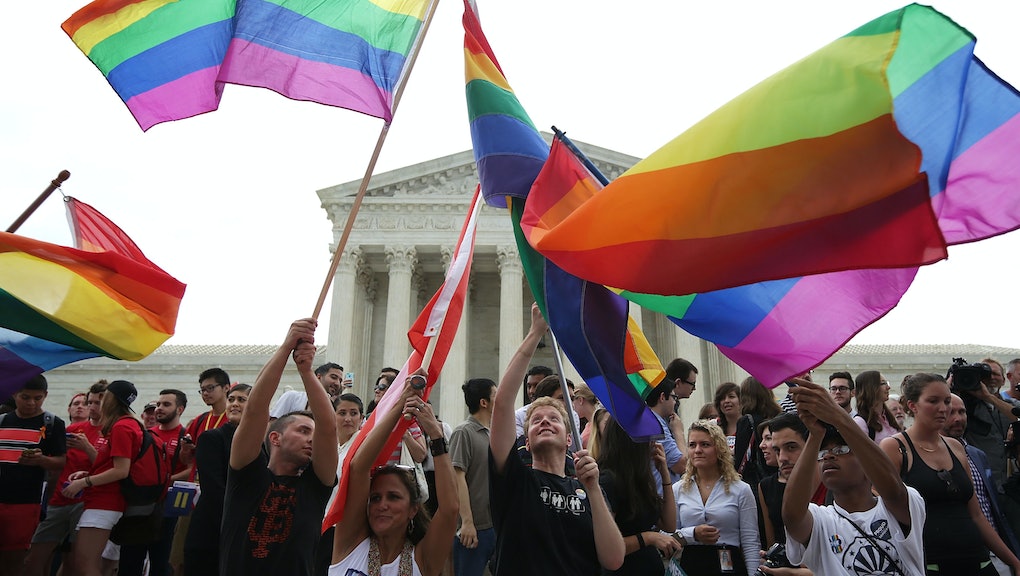 There's Something Important We're Missing with the Same-Sex Marriage Celebration

"So, when are you two getting married?"

Marriage equality has been a thing in my home state of Connecticut since 2008, so I've long operated under the assumption that I'm entitled to an eventual husband. Still, last Friday's landmark Supreme Court decision has me on the receiving end of a fresh deluge of inquiries as to when my boyfriend and I will be getting engaged. And I must admit it's thrilling to think we could get impulsively hitched right now if we wanted to.

But here's the thing: Just because the law is finally admitting, "Fine, you're a human in all 50 states now," doesn't mean all LGBT people are ready to exercise this basic right. With all the wedding celebrations and rainbow-fied profile photos, it's easy to forget:

There are plenty of reasons gay couples aren't all rushing to get married.

Coming out all over again: A fun fact about my Italian immigrant grandmother is that she doesn't actually believe gay people exist. It's adorable. She has seen them on soap operas, and I've even made low-key introductions to boyfriends before. But when my cousin once explicitly outed me to her (per my request) she just laughed and said, in her thick accent, "Oh, you're crazy!"

Meanwhile, my boyfriend just started coming out to people last year, and he still hasn't gotten around to a few extended family members. Getting married presents a unique consideration: How much space between the "coming out" and the wedding invite should there be? Can they happen simultaneously? "I'm gay. Oh and by the way, I'm also engaged and my wedding is in three months!"

That doesn't even include the 39% of LGBT individuals whose friends or family members have struggled to support them and their identities in the first place. "Outness" levels and family acceptance play a major role in constructing a guest list, and the questions they raise for same-sex couples can require some serious reflection.

"I don't know whether I want to invite [my father] to the wedding," one gay Nashville resident wrote into MarketWatch's advice column Monday, noting that his father initially rejected him after he came out and has only recently become tolerant. "My boyfriend says I should send him an invitation, but I'm torn."

Rethinking the traditions: All the celebratory texts between loved ones on Friday might have led to a few impromptu proposals, but realistically, there are far more couples who are only starting to consider proposals, not to mention engagement rings, showers and other gendered traditions. When you're gay, getting married means confronting a slew of expectations designed around relationships that don't look like yours.

And as one 22-year-old gay man put it to Mic, "Who proposes? Do the grooms and brides have separate bachelor/bachelorette parties? Who walks down the aisle?"

I might have planned out my hypothetical wedding in my head just now (boyfriend will propose, we'll throw a Jack & Jack and have a three-aisle venue in which we walk down the outer aisles until meeting at the altar — normal, right?) but others struggle to strike a balance that feels authentic to them. It's obviously up to the couple to decide how many traditions they follow and how many they modify to suit their needs, but choosing might not be easy.

Once a same-sex couple does make up their minds, that doesn't mean that the long list of third parties involved will know what to do — some may refuse to work with gay couples altogether, while others might just be a little unsure of how to handle specifics.

"When filling out your marriage license, be prepared for one of you to be listed as the bride," Richard*, a 25-year-old gay man who married in Connecticut in 2012, told Mic. "Also be prepared to be asked that question more times than you can count when talking to planners and venues."

Why a wedding really matters: Perhaps the biggest consideration a gay couple has to make before a wedding is the most universal one: Are you ready?

It's tempting to assume marriage is the response to such an exciting and historic human rights victory. But that doesn't change the fact that a lot of young people, gay and straight, are still figuring out if marriage is even right for us in the first place. Countless numbers of 20-somethings are bypassing the tradition for reasons that include financial stress, the rejection of old-school gender roles and a preference for other kinds of commitment.

For gay couples who do decide to take the plunge, it's more likely they'll do it not to react to a new law, not to please friends and family and not to throw a party.

"So many people make the act of getting married about their families and friends and about their wedding venue and the amount of guests and the crappy food, but it's not about that," Stuart*, a 28-year-old gay man who plans on marrying his partner when the time is right, told Mic.

"Marriage is about us being committed to each other and having that love be recognized."