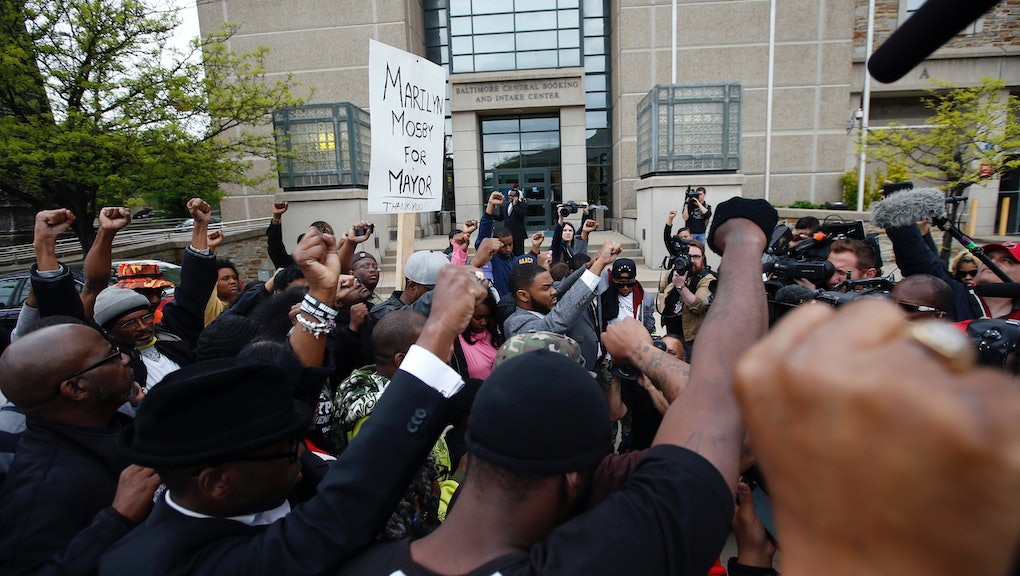 The explosion of street protests in Ferguson nearly a year ago following the police killing of unarmed black teen Michael Brown intensified attention on the failure of the U.S. Constitution to protect or offer opportunities to black males.

Discrimination against black girls and women and other people of color is also a very real phenomenon. But from police and prison officials who commit violence against black men and boys with impunity to education administrators and employers who deny or expel them from learning and work opportunities at higher rates, there is a unique dynamic facing black men and boys that is worthy of dedicated examination.

Black men are more likely to be policed, stopped, searched, arrested, sentenced and sentenced longer than their white peers, and one in three black men will end up in prison during their lifetimes. Young black men are 21 times more likely to be shot dead by a police officer than young white men. And, in 2010, black male life expectancy was 4.7 years lower than that of white males. Homicides accounted for almost a one-year loss in the life expectancy of black males.

Black male bodies are at or near the bottom of every major indicator of psychosocial well being in the U.S. This crisis has roots in the capture and enslavement of humans with black skin; the exclusion, repression and lynching of blacks during Jim Crow; and the economic, educational and residential isolation of black communities that continues today.

There is no policy framework more profoundly important to the United States than its constitution. This document is the standard against which laws are made and court decisions ruled. Yet, in low-income communities and in communities of color, residents' constitutional rights are routinely violated.

Instead of having protected First Amendment rights such as freedom of speech, assembly and press, a person in these neighborhoods can get accosted, arrested, physically abused or killed by law enforcement officials for stating an opinion, standing on a sidewalk, video recording police encounters or simply being a black male between the ages of 14 and 21.

For African-Americans, the notion of Second Amendment rights is a cruel joke. This hypocrisy is laid bare in states that have open carry firearm laws, but in which a black man with a gun is never considered entitled to firearm ownership like his white counterparts. Instead, as the family of John Crawford learned in Ohio, black men are presumed to be a threat and subject to a "shoot first, ask questions later" law enforcement mentality. From grand juries to legal representation, their Sixth and Fourteenth Amendment rights are also violated when they are denied adequate legal representation, due process and equal protection under the law; black men are more likely to be policed, stopped, searched, arrested, sentenced to prison and sentenced longer than other demographic groups. Young black men are 21 times more likely to be shot dead by a police officer than young white men.

Clearly, we need a more equitable system to ensure all citizens are granted full rights — what I call liberation policy. This entails leveraging public policy to bring about full social and economic rights for groups subject to persistent discrimination.

We need a different, more equitable system to ensure that black men and women are granted full rights — what I call liberation policy.

A liberation policy agenda would start by placing institutional constraints on the biases of the people making the policies, continue by ensuring that existing legal protections are applied in an equal fashion across populations and end by implementing and sustaining equitable policies that provide redress for those who have been consistently excluded. This agenda would have a positive effect on the entire nation, but would have an especially transformative impact on black men and boys as well as other historically marginalized groups.

So what would a liberation policy agenda look like, one that would bring fairness and justice to the system?

1. Make policing transparent, fair and constitutional. Federal and state laws should mandate the collection of data on arrests, stop-and-frisks, traffic stops and other law enforcement encounters — including the legal rights of bystanders to record community interactions with law enforcement — as well as body cameras on all police officers. The ability of local police departments to receive federal grants should be linked to compliance with federal community policing standards, and we should establish a moratorium on arrests for non-violent drug offenses such as low-level drug possession.

All U.S. states should adopt Wisconsin's law requiring democratic, independent and transparent review boards in instances of police officer-involved deaths. These efforts would begin to repair the broken trust between communities and those hired to serve and protect them.

2. Ensure court proceedings are transparent, fair and constitutional. States should adopt laws to record the proceedings and standardize the practices of grand juries. And in an effort to guarantee the Sixth Amendment right to legal defense, states should require all licensed lawyers to provide pro bono services for defendants in need of legal assistance, akin to requirements for jury service, as a complement to — and not a replacement for — a better-funded public defense corps.

3. Abolish the death penalty. With states refusing to implement humane methods of executing death row inmates and the widespread use of DNA evidence underscoring the fallibility of the U.S. system of legal justice, the death penalty should be struck down.

4. Eradicate the school-to-prison pipeline. We should abolish zero-tolerance rules that criminalize black youth for minor infractions in the education setting and push them into juvenile and criminal justice systems. State laws should make the data they collect on students' academic performance and trajectory transparent to illuminate discriminatory practices, which would lead to policies guaranteeing equitable educational opportunities for students of color. The federal government should reinforce this move by denying resources to any school district engaging in discriminatory practices. Furthermore, the federal government should introduce a new financing system that distributes resources equitably across schools. As a result, all students, including students of color, would attend well-resourced, high quality schools.

5. Dismantle the prison industrial complex and remove the profit motive. We should collect and publicly report data regarding the treatment of those held in prisons, including the exorbitant cost of incarceration, with the goal of implementing strategies to reduce the prison population. Corporations using labor from prison inmates should be banned from being publicly traded on all stock exchanges. This move would prevent these corporations from lobbying for stronger sentencing laws to generate more incarcerated individuals for the purpose of making a profit.

6. Re-enfranchise citizens with felony convictions. A movement to restore the principles of democracy to U.S. policies and politics should include the permanent restoration of voting rights for convicted felons in states across the country.

Data-driven, evidence-based policymaking is essential to implementing liberation policy. It will require the development and execution of a strategy that gives attention to electoral politics, advocacy, grassroots education and mobilization, messaging and fundraising — in addition to the politics of protests — to gain the traction necessary to achieve the desired outcomes. In other words, it will take a 21st century civil rights movement to wage the next battle for fairness and inclusion in America. A generational passing of the baton, if you will, toward ending what seems to have become a never-ending relay race for justice.