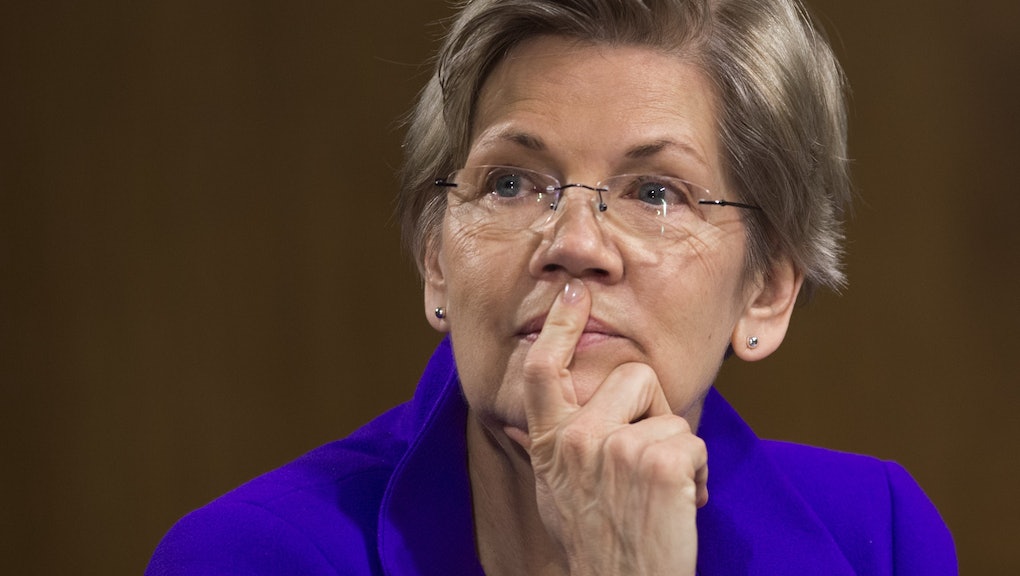 Over the past few years, Sen. Elizabeth Warren has served as the thrilling exception to liberal America's disillusionment with the Democratic Party. Whether crusading on behalf of the middle class or brazenly disparaging Wall Street, the Massachusetts senator has been fierce and unapologetic where most of her party mates have been tame. A former acclaimed academic, she has proposed major changes to regulating the financial sector and student debt relief with exacting detail. The combination of these traits — wonkiness and moxie — have elevated her to the status of standard bearer for the progressive wing of her party.

Warren's journey from cloistered legal scholar to the kind of political superstar that threatened to eclipse Hillary Clinton's frontrunner status for the Democratic nomination is remarkable. But perhaps even more striking is her political evolution: Warren was once a Republican.

It's not widely known that in the early 1990s, while she was still an academic, Warren was a registered voter with the GOP.

"I was with the GOP for a while because I really thought that it was a party that was principled in its conservative approach to economics and to markets, and I feel like the GOP party just left that," Warren said in 2014.

Warren's views have shifted over the years, but so too has the ground beneath her feet.

A few decades ago, Warren's concern about reining in banks would've allowed her to remain a Republican. Today, it makes her such a left-leaning outlier that even as a Democrat she's forced to face off in dramatic showdowns with her party's leadership. Warren's disruptive influence in Washington isn't guided by a thirst for revolution as much as it is a hope for restoration.

"I was a Republican because I thought that those were the people who best supported markets. I think that is not true anymore. I was a Republican at a time when I felt like there was a problem that the markets were under a lot more strain. It worried me whether or not the government played too activist a role."

It was Warren's discoveries in the ivory tower that led her to reconsider her real-world political commitments. Warren's academic specialty was bankruptcy, and over time her investigation into its causes led her to develop more and more sympathy for the middle class. Instead of detecting patterns of irresponsibility, as she had expected to find, she found that for most ordinary Americans financial ruin was brought on by vulnerability. This vulnerability was typically the product of a desperate bid for quality education for their children, a desire that predatory banks and credit card companies were more than happy to exploit.

Warren eventually decided too much was at stake, and by the mid-'90s, she had to jump into the policy fray. "I can't just leave this to people who are going to wreck the lives of millions of American families if they get the chance. I waded in," she told the Daily Beast.

Warren established a reputation as a compelling critic of the financial sector well before it was in vogue to be one. As she saw Republicans eviscerate crucial financial regulation in the run up to the financial crisis — often with the complicity of Democrats — she grew more convinced that Washington was being run run by big banks.

What kind of progressive is Warren?

Warren's rise to power in Washington in the 2000s as an advocate for consumers and a critic of deregulation fits into the canon of classic progressivism that can be traced back to Teddy Roosevelt's trust busting at the beginning of the 20th century. As she moved from advocate to government adviser to senator, Warren's driving ideology wasn't big government leftism, but instead a conviction that government was being hijacked by Wall Street and corporate interests. As the New Republic's Noam Scheiber noted in 2014, Warren's populism addresses what many Americans across the political spectrum view as a precondition for big government — a belief that government is serving the people rather than Wall Street.

A great deal of Warren's political trajectory is a testament to how much the country's political landscape has changed since the Reagan revolution. John Nichols, the Nation's Washington correspondent and the author of a several books on American political history, believes that not too long ago, her beliefs about insulating the government from the 1% was not mutually exclusive with being in the GOP.

"Even 25 years ago, there was still surprisingly progressive folks within the Republican Party. That has changed, radically," Nichols told Mic.

But today both parties have grown ideologically homogenous, and there is virtually no room for Warren in a GOP that has pledged an allegiance to free market fundamentalism. In fact, there isn't all that much room for her within the Democratic Party, either. She has consistently been at odds with the Obama administration on the very issues she felt the Republicans have no hope on today, such as financial regulation and trade.

Warren's ideology is always evolving, and her stances on issues like boosting Social Security make it clear that she's more than just a vigilante for robust regulation. But her biggest political asset has been articulating the idea that the government should be safe from the reach of Wall Street the way that it is from the church, as a prerequisite for a fair economy. It's wild to think that upholding such a basic principle makes one appear a radical in America today.