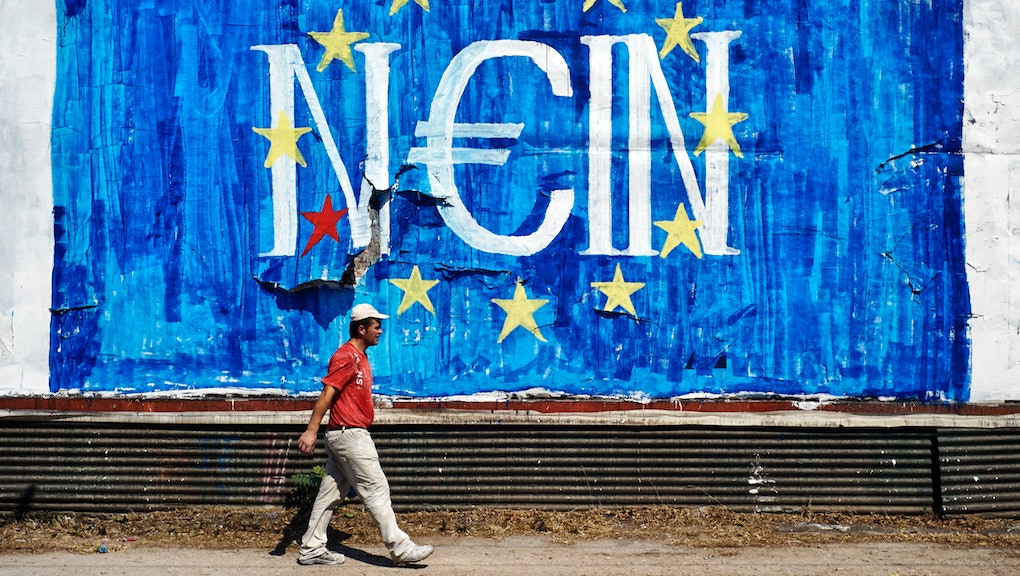 Thom Feeney, a 29-year-old shoe shop employee, is redefining collective action with his Indiegogo campaign to bail out Greece, which is on the verge of a financial meltdown as it approaches defaulting on its €1.6 ($1.8) billion loan at the end of the day Tuesday.

Feeney started the campaign Sunday, around the time debt negotiations between the European Central Bank and Greece started to fall apart. With a European Union population of 503 million, Feeney calculated each person would only have to give 3 euros to come up with enough money to save Greece.

"All this dithering over Greece is getting boring. European ministers flexing their muscles and posturing over whether they can help the Greek people of [sic] not. Why don't we the people just sort it instead?" Feeney asks on his campaign page. "If we all just chip in a few euro then we can get Greece sorted and hopefully get them back on track soon. Easy."

According to Feeney's Twitter account, he was too busy Tuesday at the shoe shop to deal with the inundation of questions from the media about his unusual endeavor.

A little overzealous, but well-intentioned: Feeney had to amend one of the "perks" on his campaign page, after initially offering a Greek island to anyone who contributed the 1.6 billion euros needed. However, when Indiegogo informed him he is not allowed to offer portions of countries to people, he changed the perk to "gratitude."

"I thought that [Greek Prime Minister Alexis Tsipras] would happily accept that but IndieGoGo emailed me to say that as the Greek government had not officially agreed to this, I wasn't allowed to offer it," Feeney lamented.

Another concern is, assuming the money is raised, how the Greek government could even legally accept such a donation. It is certainly unprecedented, and would likely cause some bureaucratic migraines. But Feeney says the project is not a publicity stunt.

"I'm not just making a statement, this is a real attempt to do something. But at the very least it's important to raise the issue of the plight of the Greek people at this time," he writes.

Even if the campaign is doomed to ineffectuality, Feeney raises an interesting point. In a time when much of the world is hurting economically, inequality is rising and countries are buckling under the weight of austerity, perhaps pooling resources and helping one another is a good antidote. And it's a good way to get the conversation around helping Greece started. However it transpires, the tiny country and its people are in desperate need of assistance.